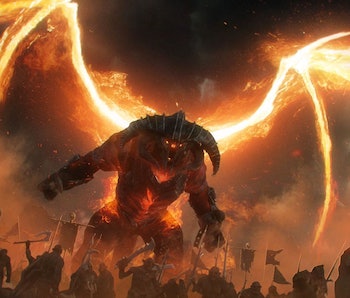 There are no records of any active Balrogs in the Second Age of Middle-earth, but all of that is about to change in Amazon’s The Rings of Power.

The Balrog featured in The Lord of the Rings trilogy that would later be known as Durin’s Bane lay dormant and undisturbed for thousands of years beneath the Misty Mountains, but what of his kin? A new Rings of Power trailer revealed at San Diego Comic-Con has seemingly confirmed previous leaks that at least one of J.R.R. Tolkien’s fierce fire monster monsters will appear in the prequel series.

At San Diego Comic-Con, Amazon made waves — quite literally, with a stunning video presentation that wrapped around most of the room and surround sound that shook the room — at Hall H on Friday with another trailer for The Lord of the Rings: The Rings of Power.

While the two previous trailers were heavy on story, this one’s heavy on action. If there was any doubt that The Rings of Power wouldn’t look like an epic saga worthy of its name, let the new Comic-Con trailer put those doubts to rest.

Perhaps most noteworthy here is the reveal of a Balrog, who is seen at the very end of the trailer. It might even be Durin’s Bane, who famously chased the Fellowship of the Ring out of the Dwarven mines Khazad-dûm, although there are some continuity things to keep in mind here, so it may be another Balrog.

The trailer is packed with stunning visuals that detail the mistaken peace the denizens of Tolkien’s world believed they had entered. But as Galadriel (Morfydd Clark) feels, she knows the peace is a facade. Upon touching Palantir, the trailer kicks off the dangerous elements that make themselves known in the series. That leads to the very end, with a monstrous Balrog roaring fire.

As a reminder, The Rings of Power takes place during the Second Age, a period thousands of years before the events of the Lord of the Rings trilogy. The Second Age has no record of any active Balrogs, but that doesn’t mean there weren’t any around. There’s also no firm record of how many Balrogs existed, but there may have been up to seven or more. With Rings of Power poised to reveal pivotal events that were only described in paragraphs of Tolkien’s appendices, it’s probable that Rings of Power will tell a previously unwritten, undocumented episode with a Balrog.

It could be Durin’s Bane at the end of the trailer, but they laid dormant beneath Moria for thousands of years undisturbed. The scene in the trailer could be an elaborate flashback, perhaps to when Durin’s Bane first made their way to Moria and hunkered down. (We already know that Rings of Power is going back even further than the Second Age.) Or maybe Durin’s Bane had an encounter that no chronicler in Tolkien’s universe ever put to paper.

The Middle-earth: Shadow of War video game also features a totally different Balrog: Tar Goroth. Like many Balrogs, Tar Goroth was a general in Morgoth’s armies that was defeated in the War of Wrath. They were cast into the depths of a pit in the plains of Gorgoroth, which essentially means he fell down a deep hole in central Mordor. But when Celebrimbor’s wraith created a New Ring of Power with series protagonist Talion, Tar Goroth woke up from his long slumber and went on a rampage until a forest spirit named Carnán dunked him in an icy lake.

Along with Middle-earth: Shadow of Mordor, however, Shadow of War isn’t really considered canon, as the narrative isn’t really based on any concrete material from canon. But who knows, maybe Amazon will consider adopting some of this material?

In any case, the presence of a Balrog — a most classic monster of evil if there ever was one — speaks to an unprecedented scale for TV that The Rings of Power is striving for. The Rings of Power is notoriously one of the most expensive television shows ever made, and so far, it’s at least as big as a giant fire demon fallen angel beast monster.

The Lord of the Rings: The Rings of Power will begin streaming on Amazon Prime Video on September 2.