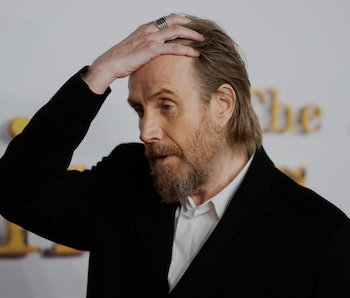 The Lizard is in Spider-Man: No Way Home, but is Rhys Ifans?

The actor, who also stars as Rasputin in The King’s Man (2021) is keeping his lips closed on the new Spidey movie, but he still has opinions on why his The Amazing Spider-Man character was such a good antagonist for Peter Parker.

“Spider Man's a great adversary to the Lizard because they're both based on creepy crawlies,” Ifans tells Inverse. “Spider-Man is so deft and slight and small and nimble, and the Lizard is this hulking ball of rage. That's why they were put together in the first place, because they're a good and interesting match. Also, there's that father-son thing between [Dr. Curtis] Connors and Peter that's really interesting to excavate.”

So, assuming the Lizard survives No Way Home, which Marvel superhero should he fight next? When I pose the question, Ifans draws a blank. But thankfully, his King’s Man co-star Djimon Hounsou steps in with the assist.

“I think it'd be interesting to see Venom,” Hounsou says.

“Yeah, Venom and the Lizard,” Ifans replies. “I mean, that would be messy. Yeah.”

Spider-Man fans may know Ifans as the Lizard, but he plays a very different type of villain in King’s Man. Inspired by true history (with a lot of narrative leaps), the movie presents Russian mystic Grigori Yefimovich Rasputin as part of a global conspiracy to kickstart WWI. That part isn’t true, but Ifans’ portrayal of the legendary figure is rooted in reality.

“The inspiration came from Rasputin himself who was a fantastical figure, albeit a tyrant,” Ifans says. “Shrouded in of mystery, much of what we know about Rasputin is hearsay and rumor and myth. It lends itself well to a project like this.”

But despite the fact that the “Mad Monk” is largely a blank canvas whose mythos overshadowed his true-life story, the movie’s portrayal is firmly rooted in fact.

“Rasputin famously had a huge physical presence,” Ifans says. “He was a hypnotic character. If you look at all the photographic evidence of Rasputin, even then in the early days of photography, he was aware of the power of his own image. More than anyone else, he looks straight down the lens when there's a camera in the room. He's even trying to kind of hypnotize the camera itself. It’s extraordinary for him to be aware of the power of such a new technology.”

Even the way Rasputin eats in The King’s Man is based on history. In one scene, he grabs a full-sized tart in one hand and devours it in seconds.

“He ate, by all accounts, like a wolf for a hound, and crowds would father to watch him eat,” Ifans says. “He ate like a heathen. So that was something I introduced. His sexual nihilism was also famous.”

That makes it into the movie too.

The one creative liberty the movie takes is in Rasputin's fighting style. This is an action movie, after all, and Ifans’ tactics blend Russian dancing (lots of spins) with traditional martial arts, all while wielding a blade and a cross-shaped needle full of opium.

That last bit might sound ridiculous, but for Ifans, it was important to make the character feel larger than life, arguably even beyond the already mythic historical figure.

“Rasputin has to be a kind of oncoming weather system,” Ifans says. “He has to have a presence in the film that is demonic and dangerous and repellent, and attractive and amusing.”