Reggie Watts on his love of weed, Night Ranger, and 'The Breakfast Club'

"I was a huge New Waver, kind of goth industrial kid." 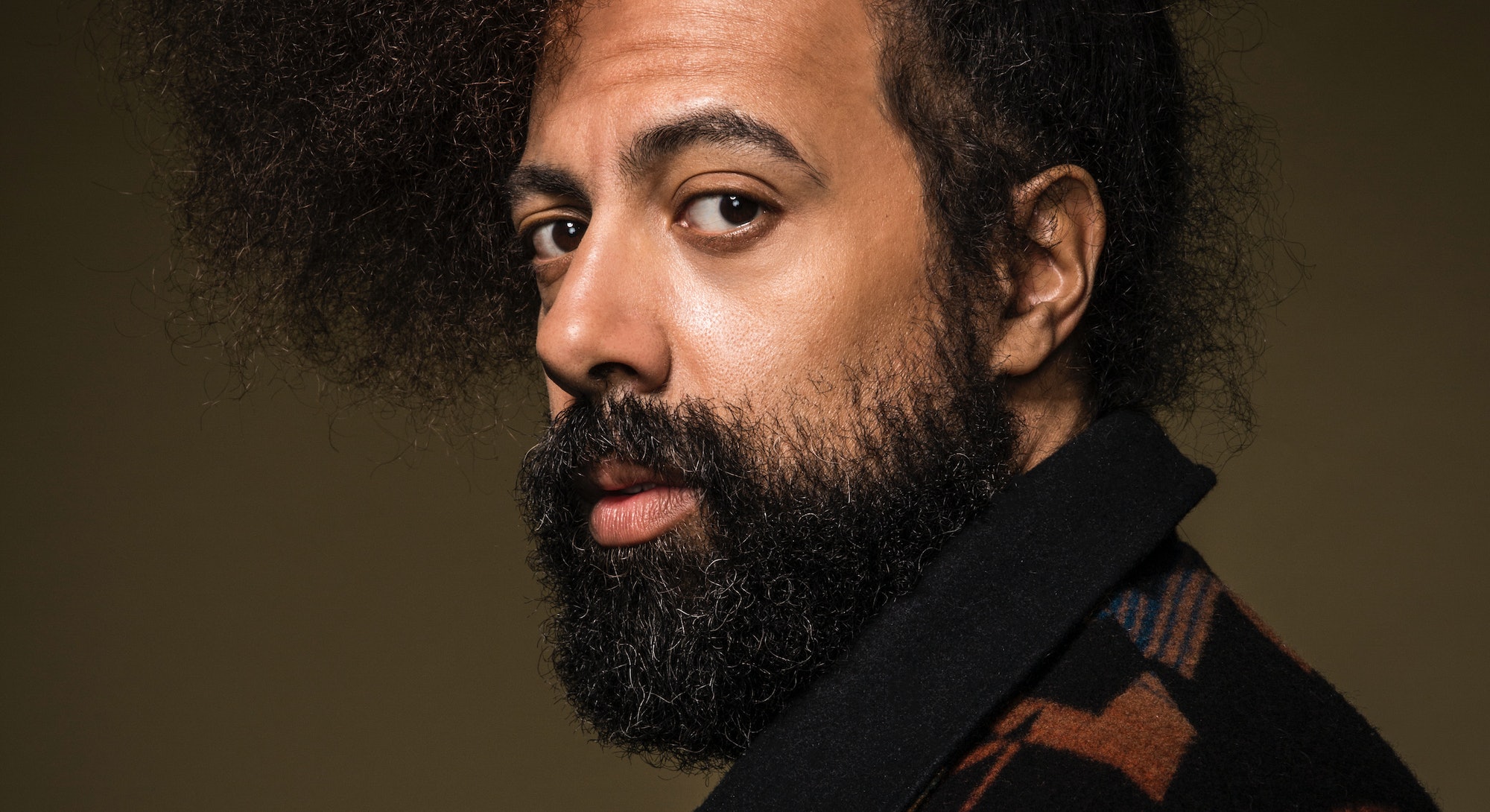 Reggie Watts is a man of many talents.

The musician, comedian, actor, writer, and bandleader on CBS's Late Late Show with James Corden recently launched his own iOS app. He envisions Watts App as a way to get back to the core intent of social media: bringing people together for a shared experience, rather than using the illusion of connection to harvest personal data. Watts is also one of the subjects of the new Netflix documentary Have a Good Trip: Adventures in Psychedelics. It aims to demystify and destigmatize the use of hallucinogens with hilarious tripping stories, goofy reenactments out of an '80s after-school special, and good old-fashioned scientific rigor.

"I couldn't have chosen better circumstances for any of my drug experiences," Watts tells Inverse of his teenage drug experiences. "I feel very fortunate that I got to experience marijuana with a group of friends and getting high for the first time next to a really beautiful Costa Rican exchange student."

I was an asshole. I was pretty curious, kind of a goofball. I loved, loved music and art, engineering, and science. Also, for whatever reason, was also kind of a – what would you call it? I guess a "lover of womanhood."

So I was writing love notes and spraying them with Chanel No. 5 and shoving them into the locker of a girl I thought was really cool. Or if a girl was having a bad day, like sneak some flowers into school. Basically I was scheming to try to improve people’s lives. But especially girls' lives.

When I was 15, it probably would have been Night Ranger, Journey, Michael Jackson, Madonna.

Night Ranger… I mean, I don't know what it was, I was just a huge fan for a summer. No idea why. Those songs are just very American, you know? I was so fortunate to grow up in the '80s — it was the most ideal time to be in the interior of the United States. I loved that type of rock, Night Ranger and Aerosmith. It had a lot of feelings in it.

Then, like 16 everything changed: The Cure, The B-52s, The Smithereens, Human League. I was a huge New Waver, kind of goth industrial kid. Cocteau Twins is a huge, huge one for me, and The Sundays. I was mostly gravitating toward that kind of music because I love the darkness of it very much. And I had an amazing crew of friends that were super unusually good looking. It was like The Lost Boys, only half of them were girls, and we all got along together. We were all friends and went on vacations and adventures.

I grew up in a small town, so you just kind of grew up with the same people from preschool, elementary, and junior high. So people knew me, and also there weren't that many black kids, maybe 11 kids in my high school. So I stood out and was kind of a goofball.

I was into Miami Vice and stuff like that. So I probably tried to wear like, like tweed pants with pleats and suspenders. At 16 I discovered all the cool music and started wearing a long black trench coat from a thrift store with rips in it repaired with red thread or red shoelaces from Air Force Ones. Then I would wear old man shirts and baggy trousers, kind of like Bender from The Breakfast Club, but with like a New Wave element, like a lot of pins and earrings and bracelets. Half my head was shaved and the rest was kind of straightened to wave over.

In elementary school, we would have Apple IIs, like six of them for every grade, and you could sign up for time to play Hunt the Wumpus and Oregon Trail.

I don't think I was online in the '80s, that wasn't really a thing yet. When I went to my piano teacher’s house her husband had a computer that used ARPANET to transmit files and things like that. I didn't really start going online ‘til probably like the early '90s.

I had like a PDA that had a modem port on it. So I would be able to send emails through a phone jack. But you had to unplug the phone.

I always imagined going away on an adventure with a woman that I loved. That's something I carry through to this day, for sure. The soulmate thing, I don’t know. I had my first girlfriend when I was 16-17. Her name was Joanne and she was a teen lingerie model from London, and so she was just, like, way out of my league in many respects. But also the exact perfect person, because I was an Anglophile and she was English and super stylish. I really fell in love with her. Then, of course, she broke up with me.

The one thing that always stayed the same is my sense of adventure. If I'm with someone, like, let’s spend a week in Berlin and go dancing at the clubs, or whatever. I love the idea of getting away going on an adventure, even if it's just getting in your car and driving to some cool little cabin or something.

What high-school teacher did you like the most, and why?

Mrs. Thiel, my drama teacher was really cool and chill. She was the coach for our drama team, she let me compete in humorous solo, physical comedy, clowning, and things like that. It was so cool how she encouraged us, and that year I got third place in the state. Her ability to see where people's strengths were and allowing us to discover who we were was invaluable.

What do you consider your first professional big break, and why?

I was in a band in Seattle in 1994-95, and we got a call asking if we could play the opening slot before Dave Matthews. So we opened for Dave Matthews and at the Tacoma Dome. It was crazy, such a huge stage. I remember coming out, and I can't even remember even what song we were doing, but I started dancing on stage. And I'm expecting everybody to be like, “boo, get off the stage, where's Dave Matthews?”

I just heard this roar from the audience. People are still piling in because it's an opening act, but there must have been at least 18-20 thousand people there. That wasn't necessarily The Break, but it was a cool moment. My biggest break professionally would be opening for Conan. That kind of like rocketed everything.

There's so many! Ten thousand in any year. But yeah, I was in a band called Micron 7 in Seattle in the mid-'90s. And the singer (Ohm) and the drummer (Zeke) had this weird rivalry. We had some big gig that we were rehearsing for, and she looked back at him after he said something. Next thing I knew, Ohm had leaped over the drum kit and was wrestling with Zeke. And the whole band was like, holy shit, grabbing their instruments. I grabbed Ohm to hold her back, and she's like a very aggressive, very strong person. She was like, “let go of me, I'm gonna punch you right now.” And we're all like on the couch, on the floor, the drums are everywhere. Then the band broke up and we never got to do that gig. It was insane, but I'm also really happy it happened. It was such a rock n’ roll moment.

I hope that some kind of breakthrough in fusion energy happens, or some form of high-density energy storage, so that we can have electrified air flights, longer-range electric vehicles, and unlimited energy. Most of the world's problems are based on resource hoarding, kind of capitalism gone awry. But if resources are abundant everywhere, if anybody could have energy anytime they needed it, then it takes away all of the power from these choke points. I guess I'm just hoping for a more egalitarian future, greener and more efficient.

I guess I would be pretty proud of myself for getting as far as I have, taking time to really fight for the dreams that I have, and being able to transmit the things that I want to transmit. That's all I ever wanted. All the stuff I grew up watching and admiring, now I've met most of those people, or have gotten to play music with some of them. All the stuff that was influencing me then, now I'm in a position where I can maybe add a little bit to that conversation as well.