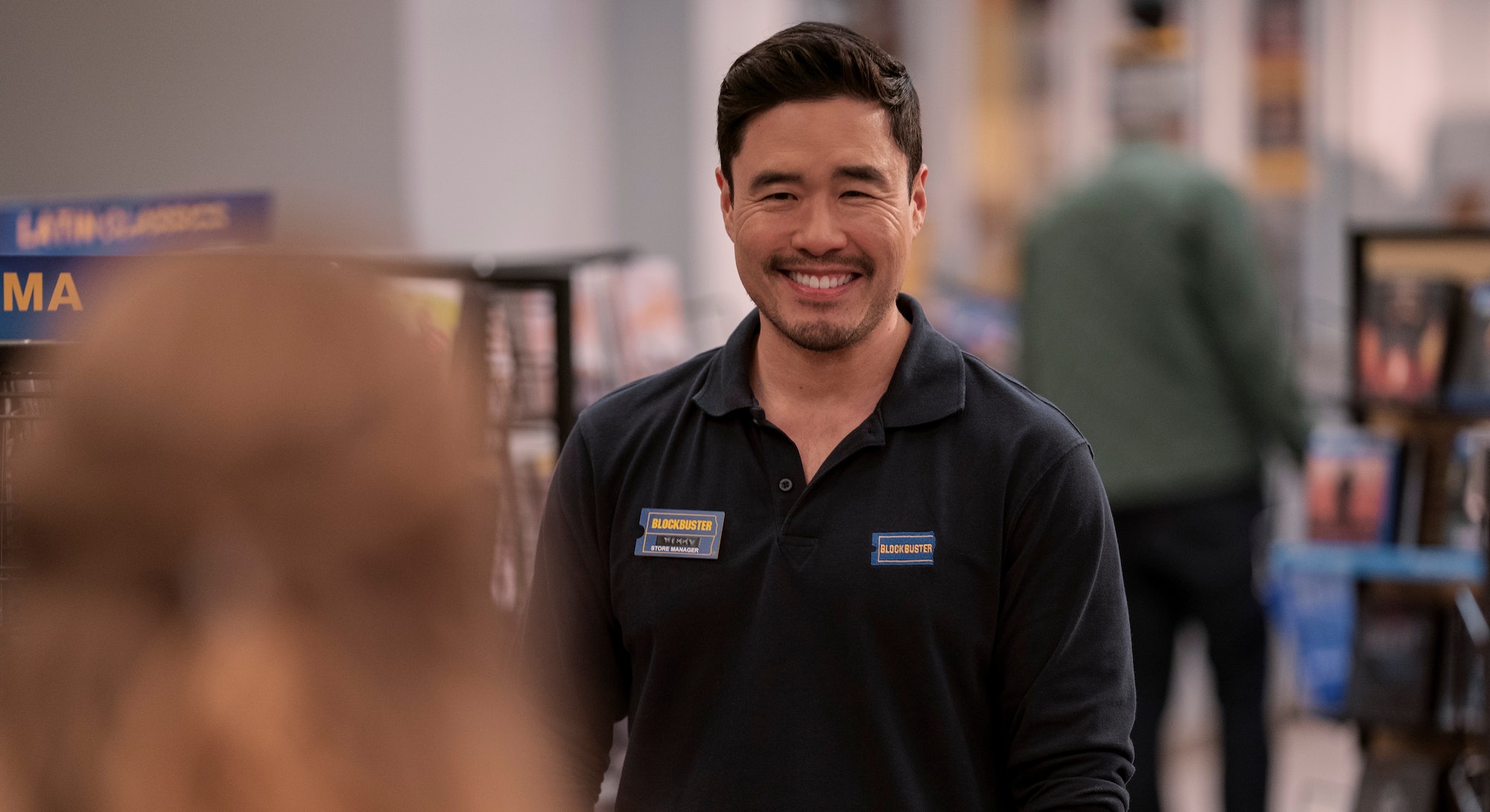 On the second floor of a West Los Angeles strip mall in Pommes Boulevard, there once stood the independent rental store called New Wave Video. If you checked out movies there circa summer 1990, you might have met a teenage Randall Park working the counter.

“It was your typical slacker high school kids, hanging out, talking about movies,” Park tells Inverse over Zoom, a hint of nostalgia in his voice. “The occasional customer would come and we’d help. But it was just doing what high school kids do during their summer jobs.”

Before he was a suburban dad in the ABC sitcom Fresh Off the Boat, a rom-com leading man in Netflix’s Always Be My Maybe, FBI agent Jimmy Woo in the Marvel Cinematic Universe, and even a comically sympathetic Kim Jong-un in The Interview (a portrayal that nearly ignited war with North Korea), Randall Park was a counter jockey who helped customers rent movies in between slices from the downstairs pizzeria. His banal summer gig as a teen preludes a rich acting resume that illustrates the diverse life experiences Asian-American activists in Hollywood are still striving to bring to the screen. (Mostly. We can cast aside being a dictator.)

His latest leading role as hapless “Timmy” in Netflix’s Blockbuster, a scripted romantic comedy set in the last Blockbuster store in America, is in many ways a spiritual full circle for Park. But the show also further cements his leading man status and propels Asian-American representation forward, even if its trappings are intentionally evocative of a nostalgic past.

“I’ve always loved rom-coms,” Park says. “It’s one of my favorite genres of movies. As corny and predictable as it could be, I love it, and I’ve always wanted to play the lead in a rom-com. That’s what prompted Always Be My Maybe, so we could see ourselves in these roles.”

An oft-heard refrain from Asian-American figures in Hollywood is how the industry’s systemic practices prevent Asian faces – faces that might look like Park’s – from gracing the screen. (Or on posters hung on the walls of stores like New Wave Video.) But back when he was renting out Top Gun to customers, Park says he was having too much fun to notice.

“At the time, I had no clue I was going to be doing this for a living,” he says. “Even watching movies, I didn’t have that consciousness at the time. I would question, ‘Why aren’t there more people like me in the movies?’ But not enough to feel upset about it. It wasn’t something I was passionate about until college, and found myself amongst this AAPI community that made me more aware.”

While enrolled in the English program at UCLA, the soon-to-be actor discovered theater and performing. In 1995, he co-founded Lapu the Coyote that Cares, still the longest-running Asian-American college theater company in the U.S. Getting into the arts informed Park on the industry’s widespread racial biases, which meant a future in it seemed unlikely.

“It was so far from any reality for me,” he says.

Even now, Park finds any need to “represent'' difficult to fathom. “It’s not a thing where I consciously thought, ‘I gotta represent and be a romantic lead.’ It’s really just something that I truly love, as fan, and if there's an opportunity to do it, it speaks to me,” says Park. “When I saw that in the pilot script [of Blockbuster], it was why I signed on. Because I love to play that.”

Park’s lazy afternoons working retail are behind him, but an echo of those days are now felt in Blockbuster, streaming on Netflix on November 3. The series stars Randall Park as 40-something store manager Timmy, a single man still processing his parents’ divorce. Timmy’s job managing Blockbuster turns severe when his overlords at corporate decide to fold. Now a small business owner running what’s left of the formerly-powerful Blockbuster Video, Timmy becomes responsible for the livelihood of his staff, including Eliza (Melissa Fumero), a Harvard dropout and divorcee whom he harbors a decades-old crush.

Running a Blockbuster in 2022 is a hard gig, especially for a guy who can barely take care of himself. On his Blockbuster role, Park muses on Timmy’s need for stability as his Achilles heel.

“He’s very much about comfort, holding on, and keeping things the same,” he observes. “When he’s thrust into this position of having to run the company, he’s forced out of arrested development. It becomes a challenge he embraces reluctantly. It’s about so much more than the store. It’s about community and keeping people together. That’s the thing that matters most.”

It’s something Park can relate to with Timmy beyond the late fees. “A good part of my adulthood, I was very stuck,” Park reveals. “I was resistant to change, even to technology. There was a part of me that felt stunted.” The actor didn’t rent his own apartment by himself until his early thirties. When he finally did, it felt like landing on the Moon. “I remember when the first time I moved into my own place, it was a tiny one bedroom. I was like, ‘Oh my god. This is a huge life move.’ I remember feeling proud of myself, but also a little bit pathetic.”

Park was a successful sitcom star when he got the call anyone can hope for in Hollywood: A place in the Marvel Cinematic Universe. In the 2018 heist comedy Ant-Man and the Wasp, Park co-starred as FBI agent Jimmy Woo, who’s tasked with enforcing the Avenger’s house arrest — and is all envious of Paul Rudd’s card tricks.

On the heels of his sitcom stardom, Randall Park joined the MCU as Jimmy Woo, a historic comic book character who comes from deep in Marvel’s publishing history.Marvel Studios
In 2019, Randall Park co-starred with comedian Ali Wong in the Netflix rom-com Always Be My Maybe. Parks says the movie was conceived precisely to see Asian-Americans star in a mainstream romantic comedy.Netflix

Park knew the terms when he was cast in the role.

“With Marvel, it’s about taking these characters and bringing yourself into it,” he says. “Ant-Man and the Wasp was clearly a comedic set-up. I think that’s why they wanted me, because they wanted it to be fun and funny. That was something I was happy to bring.” But upon learning the character’s overlooked significance in American comics, he quietly wished for just a little more.

While mostly forgotten, the comic book series remains historic through Jimmy Woo, its lead protagonist whose personality as a debonair agent sharply contrasted other unflattering depictions of Asian men in comics at the time. (Often as scheming villains seeking to topple democracy while lusting over white women.) In 2014, cultural commentator Jeff Yang described Jimmy Woo as “a positive exception” to “largely negative” portrayals of Asians in American comics, which were then shaped by “racist, xenophobic wartime propaganda.”

When Atlas evolved into Marvel Comics, Jimmy Woo joined its universe alongside the Avengers. In 2006, he became leader of the Agents of Atlas, a squad of superheroes whose publishing histories all date back to Atlas in the 1950s. Its roster included Gorilla-Man, Marvel Boy, the Greek siren Venus, a humanoid robot named M-11, and Namora (soon to surface in Black Panther: Wakanda Forever).

Park, who tells Inverse he owns his own copy of Yellow Claw #1, hopes to one day bring to light the character’s frequently forgotten legacy. “Reading the comic books and learning about the character, I felt like there's so much more to this character,” Park says.

Though he enjoyed working on Ant-Man and the Wasp, he feels WandaVision allowed him to explore a side of Jimmy he wants others to see. Including, maybe, a leader.

“The beauty of WandaVision was that we got to see more sides of Jimmy Woo,” he says. “My hope is that we get lucky enough to see him more in the Marvel Universe, to see an expansion of this character. And also, hopefully, seeing him have fun, getting into sleight of hand magic and stuff.”

Whether he’s staring down the Scarlet Witch or staring down an unruly customer, Randall Park’s many roles typify the platonic ideal for Asian actors in Hollywood. As Asian activism in Hollywood has frequently called for on-camera representation, Park ponders what, exactly, should the next step be for Asians in the industry.

To some degree, he says, getting in front of the camera is still a sound strategy. But it takes more than that now.

“It’s in every aspect of storytelling,” he says. “At the executive level, at the journalistic level, or crew, just to have more opportunities for Asian American and Pacific Islanders to thrive in this business. Doing that will open more doors and hopefully tell a more diverse range of stories, of the breadth of humanity that exists within these communities. Everything Everywhere All at Once is like a prime example. To have other things that are different and unexpected, more characters who are flawed and complicated.”

While Jimmy and Timmy inhabit different universes, Park doesn’t think there’s a galaxy of difference between them.

“They’re both, deep down, loving and caring people,” he says. “They love their team. I think you get to see that in WandaVision. Jimmy is very devoted to that squad. You definitely see that with Timmy, he’s all about his squad. While Timmy makes mistakes, he’s good at what he does. He does learn his lessons and does improve. I feel like that’s one thing with Jimmy that we learned in WandaVision, that he is really good at what he does too.”

I propose to Park a theoretical scenario: Timmy, still at Blockbuster, hangs up a Marvel poster in the store featuring Jimmy Woo’s face on it. I ask what he thinks that might inspire in the stuck, stunted Timmy.

“I think he’d be like, ‘Man, this actor looks just like me,’” Park replies, laughing a little. “I think it would inspire him.”

Blockbuster is now streaming on Netflix.