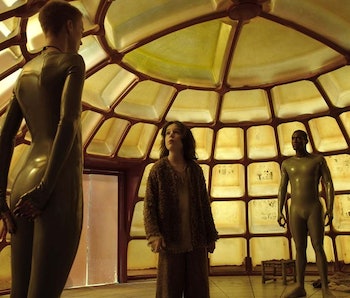 Any scenes featuring the robots "Mother" and "Father" in the debut episode of Raised By Wolves could easily double as the cover of a pulp science fiction magazine from the first half of the 20th century. Back then, on the covers of magazines like Astounding, Startling Stories, Amazing Stories, Galaxy, and more; a certain shiny brand of futurism pervaded the illustrations for the periodicals that formed the backbone of the science fiction world. Before shows like The Twilight Zone, Science Fiction Theater, The Outer Limits, and eventually Star Trek, science fiction predominantly existed only between the covers of these pulp magazines.

The style of these illustrations may have gone out of fashion in the '80s and '90s, but in the 21st century, there's a certain nostalgia for this brand of retrofuturism. From The Incredibles to Sky Captain and the World of Tomorrow to the film, Tomorrowland, the sparkling jump-suited jetpack world of old school science fiction has been homaged more than a handful of times.

But, why do the robots in Raised By Wolves look like this? Why — in 2020 — are we doing the silver jumpsuit thing? And more to the point does this aesthetic actually work with the show's concepts, or against it?

Mild spoilers for Raised By Wolves ahead.

Any cursory glance through an old pulp magazine will totally convince you that clones, robots, time travel, and post-Earth worlds have all been done before, dozens of times. In other words, the idea that robots are tasked with raising human children is hardly something that Raised By Wolves writer Aaron Guzikowski is pioneering. In fact, one of the earliest science fiction pulp heroes — Captain Future — was partially raised by a cyborg, a robot, and an android, after his parents died. Although the robots in Raised By Wolves don't look like the clunky robot Grag, the outfits worn by the robots feel like they are straight off of a Captain Future cover.

The ghostly white guy on the far left here is an android named Otho, and though he's portrayed differently in cartoon spin-offs, you can see there's a vague resemblance to the robots on Raised By Wolves. But, even if you don't buy that the Raised By Wolves robots have anything to do with Captain Future, it's pretty obvious that he skin-tight silver jumpsuits and super-smooth rocket ship from the first episode are designed to make us think of this era of science fiction. I mean, just take a look at this cover of Astounding, dated October 1939.

Obviously, the all-silver jumpsuit from this sci-fi era isn't just limited to "Mother" on Raised By Wolves. The Robinson family rocked a similar look in early Lost In Space episodes (1965) and Seven of Nine in Star Trek: Voyager was similarly burdened with this retro look in 1997. "Mother" and "Father's" silver jumpsuits, and the overall retro sci-fi feeling of Raised By Wolves then, is just a nod at an old sci-fi tradition, right? And, if so, isn't that cool?

Well, maybe not. At this point, things like Captain Future and the covers of Astounding are 80 years old. Why are the aesthetics of a contemporary science fiction show like Raised By Wolves intentionally referencing pulp illustrations nearly a century old? Who is this retro-futurism design aesthetic actually for?

We know Ridley Scott wasn't the writer of Raised By Wolves, but we do know he had a huge influence on the way the show looks. He directed the first two episodes, and if anyone knows anything about the way Scott films science fiction, then you know he draws all this stuff first. This is the way he did Blade Runner and Alien. But, when you consider the way robots (or replicants or androids) are depicted in those franchises, and you contrast those with the look of robots in Raised By Wolves, the difference is obvious. In the Alien franchise, robots like Ash or, more recently, David, are meant to look human. Yes, Scott gave David some pulpy costumes in Alien: Covenant, but overall, the aesthetic strength of the Alien/Prometheus franchise is that it doesn't look like anything else. Ditto for Blade Runner. The reason why these movies are fantastic isn't that killer aliens is a super-creative concept or that robots-in-disguise is mind-blowing, it's because the design aesthetics of these Ridley Scott joints basically redefined how science fiction was made by other people.

So, why the hell does Raised By Wolves look like something straight out of the '30s and '40s? What exactly does this design aesthetic do for the story? I guess you could argue that because the story is about atheist robots versus god-fearing humans, that a certain throwback quality kind of is justified. But that feels weak. In the 2003 Battlestar Galactica reboot, the humanoid Cylons just dressed like...regular people. Having "Mother" in a skintight silver jumpsuit complete with rocketship stolen from Captain Future feels like pulp nostalgia for the sake of it. It's not really doing any favors for the material, and is, in fact, super distracting.

In the Alien and Blade Runner franchises, Ridley Scott gave us two types of A.I. that were naturalistic and boundary-pushing. In Raised By Wolves, we're back in a pre-Blade Runner era where silver jumpsuits are somehow the most imaginative thing we can think to put on robots. If this is just a love letter to the pulp era of the previous century, that's okay, but it doesn't mean that it makes any sense. But, more urgently, if we're meant to take new science fiction like Raised By Wolves seriously, it should actually look like something from a future we haven't seen yet. Robots raising human beings is an idea as old as science fiction itself. But it didn't have to look that way.

Raised By Wolves is streaming now on HBO Max.