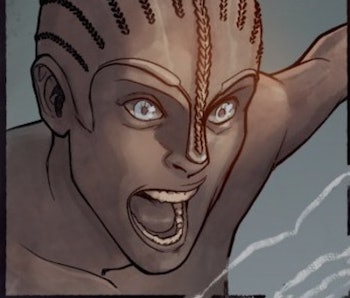 One of the great things about Raised by Wolves is how it feels like an endgame. It's taken so much to get to the moment when the show begins that both sides of this mysterious conflict are drenched in desperation. The HBO Max series, which mostly takes place on the distant exoplanet Kepler 22b, deals with the last remnants of humanity — seemingly no more than a hundred people — fighting amongst themselves.

After a few episodes, you'll have more questions than answers about this bizarre new world from Ridley Scott and Aaron Guzikowski. The tie-in Raised by Wolves comic, which just started publishing, helps to fill in the blanks.

Written by Guzikowski, Raised by Wolves' creator, the comic’s first issue, “Hark the Herald Angel Sings” is available for free wherever digital comics are sold. In it, Guzikowski starts to explore the show’s two central conflicts: 1) the fight between the Mithraic and the Atheists, and 2) the continuing challenge of parenting in this strange new world.

Narratively framed as the robot character Mother telling a story to the first group of children — the ones she birthed — the comic shows a picture of Mithraic Capitol. Raised by Wolves has hinted that the religious Mithraic, who worship a Sun-related deity called Sol, held the technological advantage over the Atheists. Here, not only is that called into question, but we see another advantage they had: cash.

The Mithraic, at least on a leadership level, seem to be flush with riches. Their architecture puts an emphasis on gold, so it adds a certain level of continuity that their necromancer robots would look gold as well.

There’s also a small mention of the origins of the necromancers — how did humans manage to build androids that could fly, act human, and kill with a glance? It’s a huge question that looms over Raised by Wolves, where the remnants of humanity are outclassed at every turn by Mother, a necromancer herself who has been hacked to turn sides, switching from Mithraic to Atheist.

Guzikowski is quick to remind readers that Mother is an unreliable narrator, at best. Mother is a propaganda machine, just because she has switched sides doesn’t mean that she’s any more tolerant of her former programming. She says the Mithraic claim the technology for the necromancers was found in their ancient texts, while she notes that it’s more likely they stole it from the Atheist nations they conquered.

Questions of necromancer origin aside, this offers an important clue into the world of Raised by Wolves: Atheist nations. Until now, it’s only been implied that there was one Atheist force. It’s unclear what this fact means, but it could hint at ideological diversity even among the Atheists on the show.

Meanwhile, on Kepler-22b, the necromancers have evolved from weapons of war to a figment of children’s imagination. The children play-act as necromancers like kids pretending to be pirates or superheroes. But in their horsing around, they accidentally burn down some crops.

The incident leads Mother and Father into a quandary. They know the kids won’t behave because their capacity to punish is limited by their programming. So they decide that the necromancers can serve as boogeymen of sorts, Santa Claus-types that know when you’ve been bad or good, so be good for goodness sake.

It works a little too well. Campion has a nightmare, and Mother comforts him, admitting they might have gone a little too far. Meanwhile, readers have also seen what happened to the first Atheist soldiers who encountered a necromancer — it didn’t go so great for them.

In just nine pages, the first Raised by Wolves comic begins to build out the mysterious world defined by the show. There are lots of questions still unanswered, and hopefully, it will build as delicately as the show itself.

Raised by Wolves is streaming on HBO Max. The comic is available wherever you get your comics online.