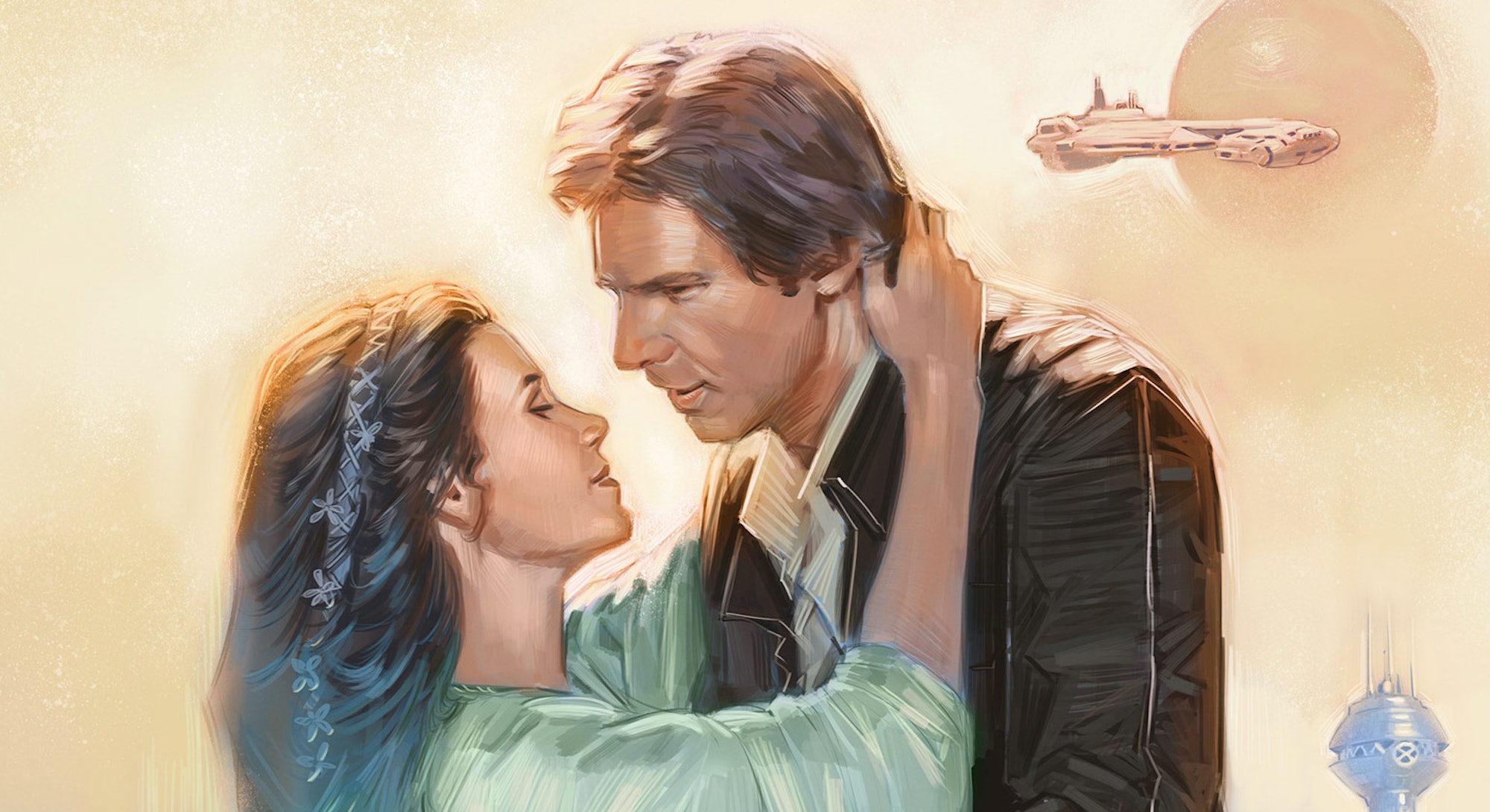 Han and Leia’s love story is the first real romance of Star Wars.

But despite their iconic status, we don’t know much about their love story. In the pre-Disney era of Star Wars Legends, there was The Courtship of Princess Leia, a 1994 novel that ends with Han and Leia’s wedding. But that’s no longer canon.

What is canon is the love story coming to bookstores on August 16 in The Princess and the Scoundrel, which follows Han and Leia as they get married and jet off on the Halcyon, a luxury ship which just so happens to be the of the Galactic Starcruiser at Disneyworld (may the Force be with corporate synergy).

The book is written by Beth Revis, author of the hit Across the Universe trilogy, and emphasizes the love between Han and Leia, which we never really got to see blossom. In the exclusive excerpt below, Princess and the Scoundrel reveals the moment of Han Solo’s proposal to Leia Organa.

One night. They’d all had one night to celebrate and pretend that the war was over. But...

It wasn’t over yet.

Han cursed. The debriefing with the generals — the other generals, because he now held that rank, too — had been quick and dirty, just a relay of information followed by the others scattering in various directions to make new plans. Time for the brains to work. No one had invited Han to stay and concoct a strategy to round up the Imperials that still remained and hadn’t gotten the message that they’d lost. That was fine. They just needed to tell him where to fly and what to shoot. He was good at that part. The best. Sure, he’d had some decent ideas in the past. But now that the blasting was over, it made sense for the others . . .

Beside him, Chewbacca roared.

“Yeah, I get you,” Han muttered. It never seemed to end. But then he paused, turning to look up at his old friend. “I haven’t forgotten, though, you know that, right? We’re heading back to Kashyyyk as soon as possible, kicking the Imperials off your world. You’ve got a family to take care of.”

Chewie started to grumble, but Han cut him off. “No. We stick to our plan, and it was always for you to go home as soon as we had a break.”

Han grabbed the rung of one of the ladders leading up into the tree village. While the leaders of the Rebellion had set up a base on the ground in order to be closer to the ships in the clearing and the immediate action they anticipated, it was little more than a large tent with a few smaller ones nearby to handle the overflow of quartering pilots and ground troops. The Ewok huts were far more comfortable living quarters. Beneath him, the ladder swung as Chewie followed Han up, his added weight throwing Han off balance for a moment before he could adjust.

Leia hadn’t been at the debriefing.

Han knew she’d been elsewhere, recording messages for allies, and he knew that the others would catch her up to speed. But...

He wanted to see her.

Han’s track record with love wasn’t necessarily the best. But this thing with Leia — it felt like more than... He couldn’t quantify it. It just felt more. He’d tried to walk away, more than once. Maybe, if he’d been able to leave Hoth when he’d planned...

Han had meant it when he’d told Leia he’d exit her life if she wanted. Of course, that was before he knew Luke and Leia were siblings, before he knew a lot of things. But he’d meant his words. He would have left, not for his own benefit, but for hers. Every other time in Han’s life, when he walked away, he did it for himself. But not that time.

Instead of letting him leave, though, she’d come to him.

And Han didn’t know if he could let her go again.

Especially not after how much time he’d already lost. He’d been frozen on Bespin and by the time he’d woken up again — blind and disoriented with hibernation sickness—so much time had passed. Leia had loved him for nearly a whole year, and Vader had stolen that year from him. Han wasn’t going to let more time slip through his fingers.

Distantly, he became aware that Chewie had been talking to him. Han hooked his leg over the top of the ladder and landed with a thud of his boots on the wooden walkway of the village. “Yeah, buddy?” he asked.

Chewie swung himself up, big arms balancing before he landed fully. He roared, half in amusement, half in discontent at being ignored.

“Sorry!” Han said, throwing up his hands. “I’ve got things on my mind.”

“Oh, am I just a thing?” Leia’s voice sliced through Han’s brain.

“Hey, now, you don’t occupy my every thought, Princess,” Han snapped back, but the warm smile in his eyes belied the statement.

“Hey, now, you don’t occupy my every thought, Princess.”

“You sure about that?” she asked, smirking, her rosy lower lip just begging to be kissed, and Han blanked for several moments, incapable of doing anything more than blink at her.

“I was just looking for you,” Leia said. Her tone slid from playful to business. “Mon told me about the plans discovered on the Imperial base, and I wanted to check in with the general who made the discovery.”

Right. That was him.

Leia kept speaking, unaware that Han wasn’t focused on her words. “The timing of that base’s communication — even if we haven’t been able to decrypt most of the encoded contents yet — indicates that there’s far more at play than we originally thought.”

Grumbling, Chewie left the two of them alone, heading deeper into the village. Han was far too focused on Leia to really register his friend walking off, though. His mind raced with the impossibility of his thoughts — him, and a princess? It couldn’t possibly work in the long term.

“We’ve been monitoring a lot of traffic in the Anoat system in particular, and I wanted to see if any of the transmissions you intercepted indicated that,” Leia continued. “Or perhaps you saw something in the base — not everything needs to be online, physical transportation of sector codes could indicate.”

Since when did Han care about the long term, though?

“Han?” Leia asked, her head tilted up at him.

“I want you,” he stated flatly.

“Me?” She looked around — although the base below had been bustling with activity, this part of the village was remarkably quiet. “For what?”

Leia’s confusion shifted to something else, something he couldn’t quite read. He never could tell everything going on in her mind, and he loved that about her.

She was a princess, the face of the Rebellion, the new government’s greatest hope, a symbol more than a person. But she was also just Leia. And she was his. Han needed her the same way he needed the Falcon — sure, he could fly without her, but what was the point?

Han needed her the same way he needed the Falcon.

Leia, usually so calm and collected, with the ability to face down Vader himself, could not hide her shock in that moment. Her eyes widened, her lips parted, and the rest of her body stilled, frozen in surprise. Han felt the corner of his lips twisting up, watching as Leia didn’t try to hide her shock. She didn’t hide her desire, either. He was hers, too.

But she had a grander destiny than he could comprehend. Elbows-deep in politics and someone who would always be doing, doing, doing.

Even now, even though neither of them had physically moved, Han could see Leia spinning away from him, out of his grasp.

So he reached out to her. He took her hand. Rubbed the place on her finger where a ring could go.

Han was sure the same questions flying through his mind were in hers as well. How many people were already discussing marriages and settling down with folk they’d only known in combat? It was a common enough thing — emotions ran high after battle, people felt the need to grasp at life when faced with the death of war. The flip side of fighting was loving, and there was a hell of a lot of energy that needed to be redirected somewhere.

This was the part where Han was supposed to tip his chin, laugh, say it was all a joke.

He didn’t flinch as he watched doubt cloud Leia’s face. He stood there, and he waited for her to realize the same truth he knew.

They were better together.

And marriage? Well, it was a formality. But it was also a promise.

One he intended to keep.

“Yes,” she said. Just that word, but with a smile that went along with it that lit up the entire galaxy.

The Princess and the Scoundrel will be available in bookstores August 16.