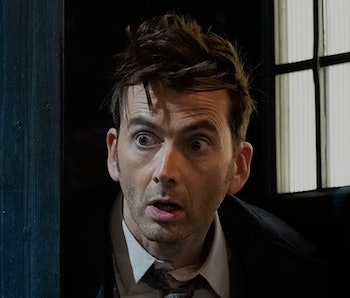 The Doctor has regenerated. But in the final adventure of Jodie Whittaker’s 13th Time Lord on Doctor Who, the venerable sci-fi franchise suddenly changed the rules of the game. Throughout “The Power of the Doctor,” the canon of the Whoniverse is altered, inverted, and given new dimensions. Here are the five most significant ways Who canon now has changed, and what it might mean going forward.

Huge spoilers ahead for “The Power of the Doctor.”

5. Other Time Lords can hijack a regeneration

As established way back in the 1966 episode “The 10th Planet,” when the Doctor (or any other) Time Lord dies, they can “regenerate” into a new body, often with a new personality. In “The Power of the Doctor,” The Master (Sacha Dhawan) says he’s “going old school” and pulls a “Forced regeneration,” onto the Doctor, which he mentions has happened before, referencing a 1969 episode in which the 2nd Doctor (Patrick Troughton) was forced to regenerate into the 3rd Doctor (Jon Pertwee.) But this time, the Master forces the Doctor to regenerate into him. Basically, the Master becomes the Doctor in this regeneration, but apparently has aspects of the Doctor, too.

Although the visual moment of this regeneration takes place in dual glass booths — referencing David Tennant’s “The End of Time Part 2” (2010) — the actual regeneration is also a brilliant fake-out. All the footage from the trailers showing Jodie Whittaker’s Doctor succumbing to the regeneration energy was from this scene, not the actual scene in the end in which she regenerated into... well, we’ll get to that.

When the Master becomes the Doctor, his stated goal is to “tarnish the name of the Doctor.” With Yaz (Mandip Gill) in tow, he terrorizes at least one planet and claims the mayhem is the work of the Doctor.

This seems to reconcile a wonky bit of continuity about the Doctor’s dark future, hinted at for a very long time. In “The Mysterious Planet,” (1986) the 6th Doctor (Colin Baker) learned of an evil future version of himself called the Valeyard.

Meanwhile, throughout the 10th (David Tennant) and 11th (Matt Smith) Doctor’s tenures, there were hints that in the future, he’d be considered a horrible person. The Master doesn’t literally become the Valeyard, but it seems like his brief dark tenure as the Doctor could account for some of the Doctor’s bad reputation in the distant future.

3. The Doctor has a backup AI duplicate

Critical to the plot of “The Power of the Doctor,” is the fact that the 13th Doctor creates a holographic, telepathic AI version of herself to assist Yaz, Ace (Sophie Aldred), and Tegan (Janet Fielding). More than just a message, this holographic AI basically is the Doctor and can also change appearance based on the interface with each user. To Yaz, the AI appears as Jodie Whittaker, but to Ace, the 7th Doctor, Sylvester McCoy appears. Tegan sees the 5th Doctor, Peter Davison.

Yaz also uses this AI to create a visage of the Fugitive Doctor (Jo Martin), which fools the Master into thinking another, previous version of the Doctor has arrived.

2. The Guardians of the Edge regulate the Doctor’s regeneration

Trapped inside of her own consciousness, while the Master controls her body, the Doctor speaks to her other versions of herself including:

These “vestiges” of the Doctor’s past lives explain that there is a place where the Doctor must pass “during the process of regeneration.” In this case, these past versions of the Doctor prevent the regeneration process from fully completing, because they don’t want the Master to take over their body.

1. The Doctor regenerates into a new version of a previous Doctor

Unlike every previous major onscreen regeneration, the incumbent Doctor doesn’t become the next Doctor. Instead, Jodie Whittaker becomes David Tennant. However, this time, the regeneration comes with a brand-new costume, which is possibly even weirder than the fact that the Doctor has jumped back three previous iterations. In all other regenerations, the new Doctor is usually wearing the clothes of the previous version. Whittaker was wearing Peter Capaldi’s clothes in “The Woman Who Fell To Earth,” Peter Capaldi was wearing Matt Smith’s clothes in “Deep Breath,” and so on. Even with the Doctor having regenerated off-camera, like in “The Spearhead From Space,” the character doesn’t instantly get a glow-up with a new outfit.

Uttering his “what, what, what!?” catchphrase from his tenure as the 10th Doctor, the return of David Tennant poses a lot of questions. Why did the Doctor revert to a previous version of themselves? Will this Doctor actually behave like the 10th Doctor, or will his personality be more of a composite of all the versions (Smith, Capaldi, and Whittaker) since then? And, with all the cameos in “The Power of the Doctor,” what should fans expect for the upcoming 60th anniversary special in 2023?

As Doctor Who regeneration cliffhangers go, the reappearance of David Tennant has broken with tradition and given the series a jolt of nostalgia simultaneously. In the trailer for the next round of Doctor Who episodes, we see both Tennant, and incoming Doctor Ncuti Gatwa. In the trailer, the Doctor (Tennant) says, “I don’t know who I am anymore.” We know Tennant has to become Gatwa at some point, but how we get to that point is anybody’s guess. As Gatwa’s version of the Doctor says in the new trailer, “Will someone tell me what the hell is going on here?

The next round of three new Doctor Who specials start airing in November 2023, featuring, David Tennant as the newly regenerated Doctor. But, it looks like the new incumbent Doctor, Ncuti Gatwa will appear sooner rather than later!

Doctor Who: The Power of the Doctor is streaming now on AMC+.