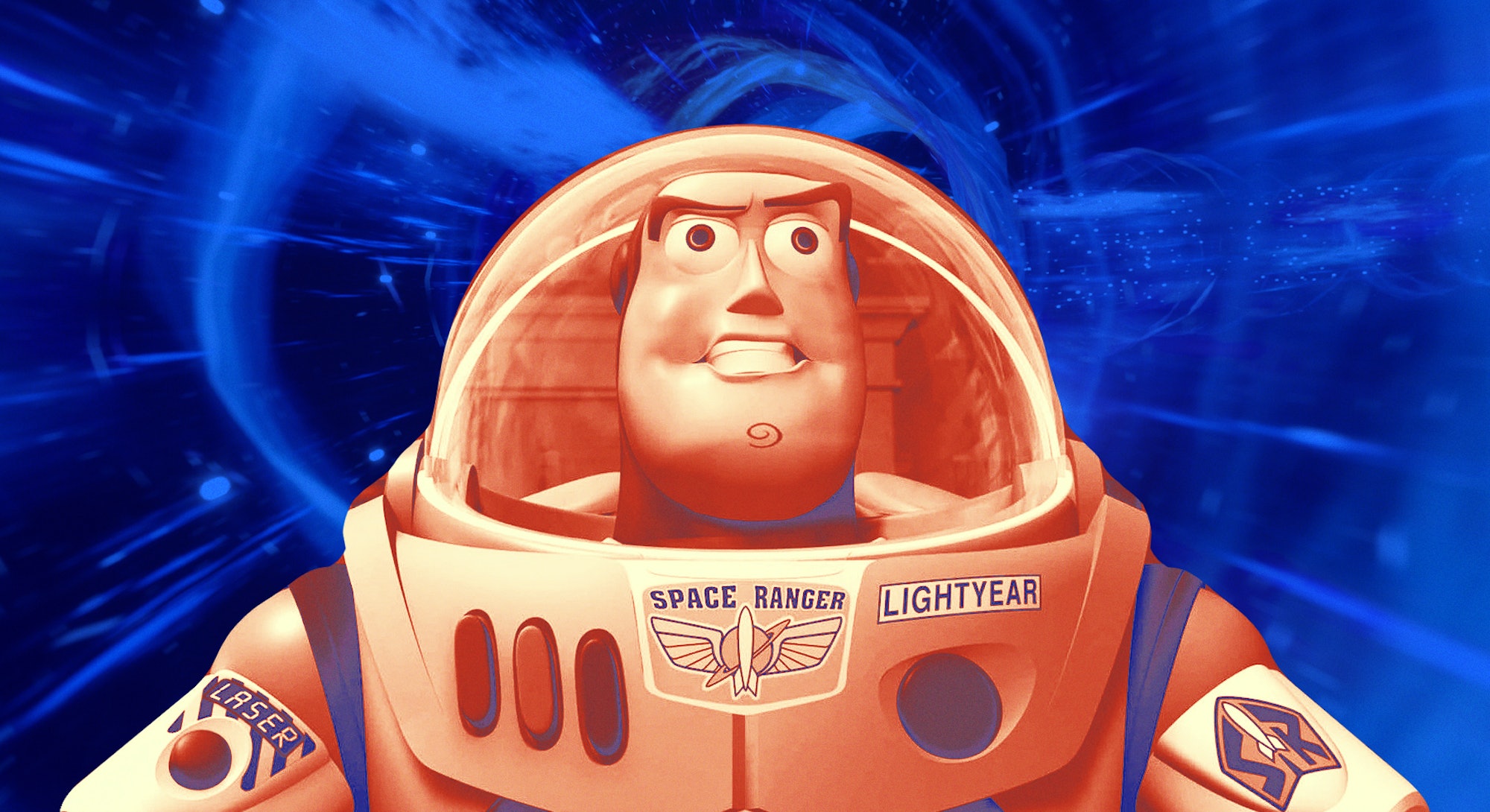 When Buzz Lightyear first karate chopped his way into theaters in 1995, the last thing on anyone’s mind was time travel.

But 27 years later, the star of Pixar’s first movie is jetting off on his own science fiction adventure that leans far more into hard sci-fi than the studio’s standard “cautionary environmental allegory” — think Wall-E, or “talking dog tech” like in Up.

Instead, the team behind Lightyear (in theaters this summer) set out to tell a time-travel epic that’s scientifically sound while also evoking the era that inspired it. The result is somehow both the studio’s most futuristic and also nostalgic movie to date. Here’s how they did it.

THE RULES OF TIME TRAVEL is an Inverse special issue exploring the evolution of science fiction's most imaginative sub-genre. From Marty McFly to Avengers: Endgame

Pixar fans first met Buzz Lightyear as one of the toys in Toy Story. Lightyear is a movie that inspired that toy. Because of this unique (if somewhat contrived) premise, the movie has free reign to be as retro as it wants — this is technically set in the ‘90s, after all. Instead, it crafts a plot that belongs exclusively in 2022, one with a complex and scientifically sound premise it trusts its audience to follow. We spoke to the film’s director, executive producer, and director of photography about why this might just be your new favorite time travel movie.

Lightyear begins with Buzz (now voiced by Chris Evans instead of Tim Allen) working alongside Alisha Hawthorne (Uzo Aduba) after they crash on a strange planet. Buzz wants to immediately escape, but Alisha is content with settling this new world. Together, they colonize the area and develop a pretty good civilization, but Buzz can only think of a possible escape plan.

“The faster you travel the farther in time you go”

Years later, he gets everything in place for an attempt to break through the planet’s atmosphere. It all seems to be going well — until he can’t get up enough power and must return to the planet. But when he lands, everything is changed. Since his ship was approaching the speed of light, years passed on the planet’s surface in what felt like mere moments two him.

So what does Buzz do? He’s dead set on going to infinity and beyond, so he tries again. With every attempt, he travels further in the future, watching his dear friend fall in love, start a family, and grow old, all in a matter of days.

The final time he attempts, he’s almost successful, but once again lands on the planet. This time, he hasn’t jumped ahead a few years, but an entire lifetime. The civilization he started with Alisha is now under attack, and the only person set to fix it is Izzy, her granddaughter.

The concept of time moving faster for Buzz than Alisha isn’t just something out of a sci-fi movie — it’s based on time dilation, the scientific theory that speed affects the passage of time. Dr. Ronald L. Mallett, professor emeritus of physics at the University of Connecticut, explained the concept to Inverse with an example that sounds almost exactly like Buzz’s situation.

“If you were on a rocket traveling close to the speed of light when you returned to Earth, only a few years might have passed for you, but decades could have passed on Earth,” Mallett says. “Since time is running at a normal rate for everyone else.”

“What we've tried to do is to give a simple equation for this,” Susman says, “which is that the faster you travel the farther in time you go and four minutes in that ship equals four years on the planet.”

This is technically metaphysics. It’s not the kind of thing you might expect from Pixar, but in Lightyear, it works.

There’s more than one kind of time travel. While the plot of Lightyear plot is cutting-edge sci-fi, the design is much more old-fashioned. Lightyear is supposed to be the movie Andy grew up with, but don’t look for specifics as to when or how he saw it. Director Angus MacLane tells Inverse that Andy he would have seen the film on VHS in the ‘80s or ‘90s.

This vagueness has a hidden benefit. Lightyear has the opportunity to pull from sci-fi history, but don’t expect the rag-tag designs of low-budget science fiction to factor into the aesthetic.

“We weren't gonna do retro technology,” MacLane says. “We were going to take the best advantage we could at the technology we have at our disposal. So it was really more about the design, the overall feel and look of the film, not so much the limitations of the era.”

How do you demonstrate this retro feel without making the aesthetic look dated? Enter Jeremy Lasky, the director of photography. He had to deal with a problem unique to computer animation.

“In the seventies and eighties, and even lower budget movies now, the sets all temporarily made,” Lasky says. “All the sets are designed to be destroyed.”

Computer animation works in reverse. Sets are meticulously modeled, and then the action plays out within them. Lasky didn’t want the sets to distract from the story, so he took a page out of the low-budget movie playbook by focusing on the characters and hiding the little details, like grass and plants, that might blow you away in a typical Pixar film.

“It takes the CG vibe out of things in a really nice way,” Lasky says, “but it also serves the purpose of letting us focus on the important thing happening at that time.”

Lightyear is a time-travel experience on every level, from its scientifically accurate portrayal of the concept to the nostalgia baked into its story and animation. There’s always room for literal time travel, but emotional time travel is just as good.