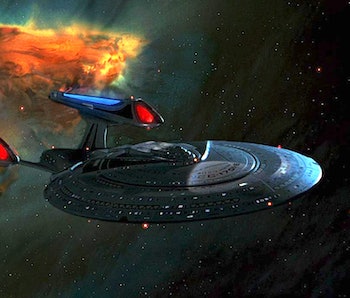 In 2023, the third season of Star Trek: Picard will not only conclude the spinoff series but also, as promised by showrunner Terry Matalas and producer Alex Kurtzman, serve as a final send-off for the entire crew of The Next Generation.

Fans have been promised a big starship-centric adventure this season. But which ship will Picard, Riker, Worf, Troi, Crusher, Geordi, Seven, and (maybe) Data be traveling on? It turns out the answer is not any version of the Enterprise. Mild spoilers ahead.

Over on the All Access Star Trek podcast on TrekMovie.com, Anthony Pascale and Laurie Ulster conducted a lengthy interview with Picard showrunner Terry Matalas. It’s an amazing deep-dive, covering everything from Matalas’ background on Voyager and Enterprise to how his time on the 12 Monkeys TV show influenced Picard. When asked if Picard Season 3 will feel like a “new show” relative to the first two seasons, Matalas replied, “A little bit!”

Picard Season 3 is being billed as a full reunion of the cast of The Next Generation, but one familiar element will be absent. Despite the band getting back together, they will not be boldly going on the Enterprise.

When asked if the “hero” ship of Picard Season 3 is some version of the Enterprise, Matalas said no.

“We spend the most time on one ship this season that is not the Enterprise. That does not mean you won’t get your Enterprise fixes. It’s a ship that’s a bit of an underdog. It is not the Stargazer. It’s lit a bit differently. The Stargazer had a gloss to it and was lit up. This is a bit more in the spirit of a movie.”

On his Twitter account, Matalas has been giving glimpses of what might be this mystery starship for over a year now. Because of its size, we can probably rule out the La Sirena, though we may still see that ship sometime in Season 3.

Matalas’ comment that this ship is an “underdog” is also tantalizing. The word conjures all sorts of images, from the Defiant of Deep Space Nine to the USS Cerritos from Lower Decks. But does anyone consider Voyager an underdog? It’s presumably still around in the early 25th century.

Matalas also made it clear that Picard Season 3 will not contradict the pseudo-canon of the novel The Last Best Hope, in which Worf (Michael Dorn) was made Captain of the Enterprise-E following Picard’s promotion to Admiral. Matalas wants fans to know “we’re not saying that didn’t happen,” but no one should expect Worf to still be in that position during Picard Season 3.

Matalas also revealed that the first character fans will see in Picard Season 3 is Beverly Crusher (Gates McFadden), although Crusher will enter the series in an “unexpected” way. Picard has been about exploring what it’s like to revisit characters we haven’t seen for over 25 years, so just because Worf and Crusher and Geordi are returning it doesn’t mean we should expect them to be the same people from The Next Generation. The TNG crew still have a lot of surprises left in them, including a new ride that remains shrouded in mystery.