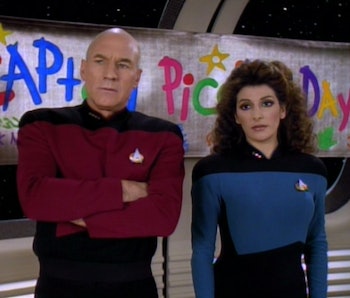 If you're celebrating Captain Picard Day, then the image you probably most associate with the holiday is the banner from Star Trek: The Next Generation and Picard. If you have a soft spot for the banner made by the children of the Enterprise, you may not have stopped to consider that there's a serious mystery embedded within its reappearance in Picard. Could Season 2 of Picard solve it? Let's investigate. Spoilers ahead for Star Trek: Picard Season 1.

On June 16, Star Trek fans celebrate "Captain Picard Day." Unlike a lot of weird geek holidays created seemingly out of nothing, this one originates in an episode of The Next Generation. First aired on January 10, 1994, the episode "The Pegasus" begins with Jean-Luc begrudgingly participating in the holiday aboard the USS Enterprise-D. How do Trekkies know this "really" happened on June 16, 2370? Basically, it's creative interpretation (or close reading) of the Stardate 47457.1. (In other words, it's June 16 because of Trekkie math.)

Essentially, it's a holiday created for the children who live on the Enterprise, which involves drawings, sculptures, and one very iconic paper banner. That's where the mystery comes in. In the very first episode of Picard, "Remembrance," Jean-Luc visits his personal archive within the Starfleet Museum. This archive is not open to the public, which means it's basically Jean-Luc's fancy 24th-century storage unit. When "Remembrance" aired, fans everywhere noticed the Captain Picard Day banner.

In a post-finale Easter egg recap video for Wired, Chabon and producer Akiva Goldsman jokingly pointed out that "our is less shiny" and Chabon added, "lots of people criticized us for it." So the banner in Picard was slightly different than the original banner in TNG, and we know the real-world answer as to why: The people who made the banner in 2020 had to recreate something that was made in 1994. But, in Star Trek canon, is it actually the same banner?

Maybe. Maybe not. In Star Trek: Generations, the USS Enterprise-D separated in half and was partially destroyed. The part that was left — the saucer section — crashlanded on the planet Verdian III. At the end of the movie, we see Picard and Riker going through the captain's stuff in his Ready Room and the only thing Picard takes with him from the wrecked hull of the Enterprise is his family photo album. In fact, another precious artifact, the Kurlan naiskos, is left behind by Picard in this scene.

Assuming the banner was still (somewhere) on the Enterprise in 2371 (the year Generations takes place) when, exactly, did Picard go back and retrieve it? Did he send a lower-ranking crew member to clean-out his quarters and shuttle all of his stuff back to him on Earth? In the exact same scene in Picard, we also see pieces of the Kurlan naiskos artificial, implying Jean-Luc also got those out of the wreckage of the Enterprise at some later point. Also, in "Remembrance," we learn that two paintings by Data were gifted to Picard in 2369.

So, we've got at least four previous objects — two of Data's paintings, Kurlan naiskos sculpture and the Captain Picard Day banner that survived the crash-landing and were later retrieved and given back to Jean-Luc. Then again, because replication technology exists in Trek, and because the banner looks a little bit different, you could theorize that the Captain Picard Day banner was replicated, a kind of space-age forgery.

This explanation feels unlikely — we know Picard loves real things. Still, we have a two-pronged (and admittedly hilariously low-stakes) mystery. When and how did Picard get the banner back from the Enterprise-D wreckage and, why does the banner look different?

It would be the height of silly fan service for Picard Season 2 to answer this question. I would be the last person to actually suggest that the producers and writers concoct an entire scenario just to explain why Jean-Luc has his Captain Picard Day banner and why it looks different. Data's cat Spot looks totally different from episode to episode (changing from a long-hair cat to a short hair cat overnight) and nobody complained about that. So, why should we even think that Picard Season 2 will mess around with this banner?

Well... Season 1 of Picard relied heavily on flashbacks to establish the backstory of 2399. Could Season 2 feature one scene in which we get a flashback to 2371 and Jean-Luc Picard is back in the wreckage of the Enterprise, rummaging around for some kids' drawings? We can only dream!