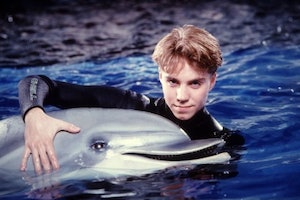 shows for fans of wild futures

Peacock, NBC's new streaming service, aims to change the network-focused streaming model. While CBS All Access and HBO Max require subscriptions to stream anything, Peacock allows free ad-supported viewing of a significant chunk of its library. There's a lot to choose from, and it's difficult to know where to start.

Here are five sci-fi shows on Peacock that are well worth checking out, from the 90s to a dystopian future.

If space is the final frontier, Seaquest DSV (deep submergence vehicle, in case you were wondering) explores the deep sea: the penultimate frontier. Set in 2018, this series follows a crew of scientists as they look for hope in a world sapped of its natural resources. At first glance, it seems to follow the Star Trek: The Next Generation model: there's a teenage boy genius, a female medical officer, guest-stars-of-the-week (including a mustachioed William Shatner), and even a talking dolphin.

However, this show seems to avoid most of the issues TNG ran into, while still keeping the old-school sci-fi camp that makes classic shows like this fun to watch. Plus, it has a bit of extra credibility: the first two seasons were executive produced by Steven Spielberg himself, and he cast Roy Scheider, best known as Police Chief Martin Brody in Jaws, in the lead role.

It's difficult to talk about sci-fi television without talking about Battlestar Galactica. Made to be a remake of a gloriously cheesy 70s series, this show is now a classic in its own right, spinning off multiple other properties in the same universe, most of which are also on Peacock. Battlestar follows a group of humans in the distant, distant future as they battle the vicious Cylons and seek a mythical world known only as Earth.

Battlestar Galactica is notoriously bingeable show, even featuring in a Portlandia sketch culminating in Ronald D. Moore being begged to write more episodes. Give it a watch, just remember to take breaks to sleep and eat!

Sliders is Quantum Leap for the late 90s. Starring John Rhys-Davies and Jerry O'Connell, this show follows four people as they use an experimental new technology to pass through different parallel universes, from ones where America didn't win the Revolutionary War to one where time flows backwards. There's even a universe where then-First Lady Hillary Clinton becomes President of the United States.

Sure, this show didn't win any Emmys, but it has a serial, episodic quality that is missing from a lot of shows today: you could sit down, watch one episode, and feel completely satisfied. In this universe, where shows become available all at once, it's somewhat of a novelty.

Warehouse 13 has a lot of tried-and true tropes at its disposal: a bad boy federal agent teams up with a female agent who likes following the rules, and together they search the country for various supernatural artifacts, neutralize them, and then store them in the infinite "Warehouse 13." It's X-Files meets Supernatural with a little bit of Indiana Jones.

Much like all three of those properties, Warehouse 13 uses a lot of humor and history in combination with supernatural elements. For example, one of the artifacts is Pavlov's bell from the famous Pavlov's dog experiments. This bell has the power to call any dog to you, but then you suffer excessive drooling for 24 hours. Wit like that combined with the artifact-of-the-week structure makes this the perfect escapism watch.

Peacock's most anticipated original series is hands-down Brave New World, an adaptation of the English class syllabus mainstay by Aldous Huxley. With a pastel-tinged aesthetic, this perfectly carries over the weirdly utopic yet obviously dystopic world of the novel in a time where it's all the more relevant. Brave New World's showrunner spoke with Inverse about adapting the series for 2020: "If you look at the book, it's flawed, dated," he said. "We have the benefit of being able to pass the book through the filter of our own time. Everything in the book really lends itself to that."

As an original series, the entire series is excluded from Peacock's free ad-supported content, but the first two episodes are still free to watch. Give those a try before you opt-in.