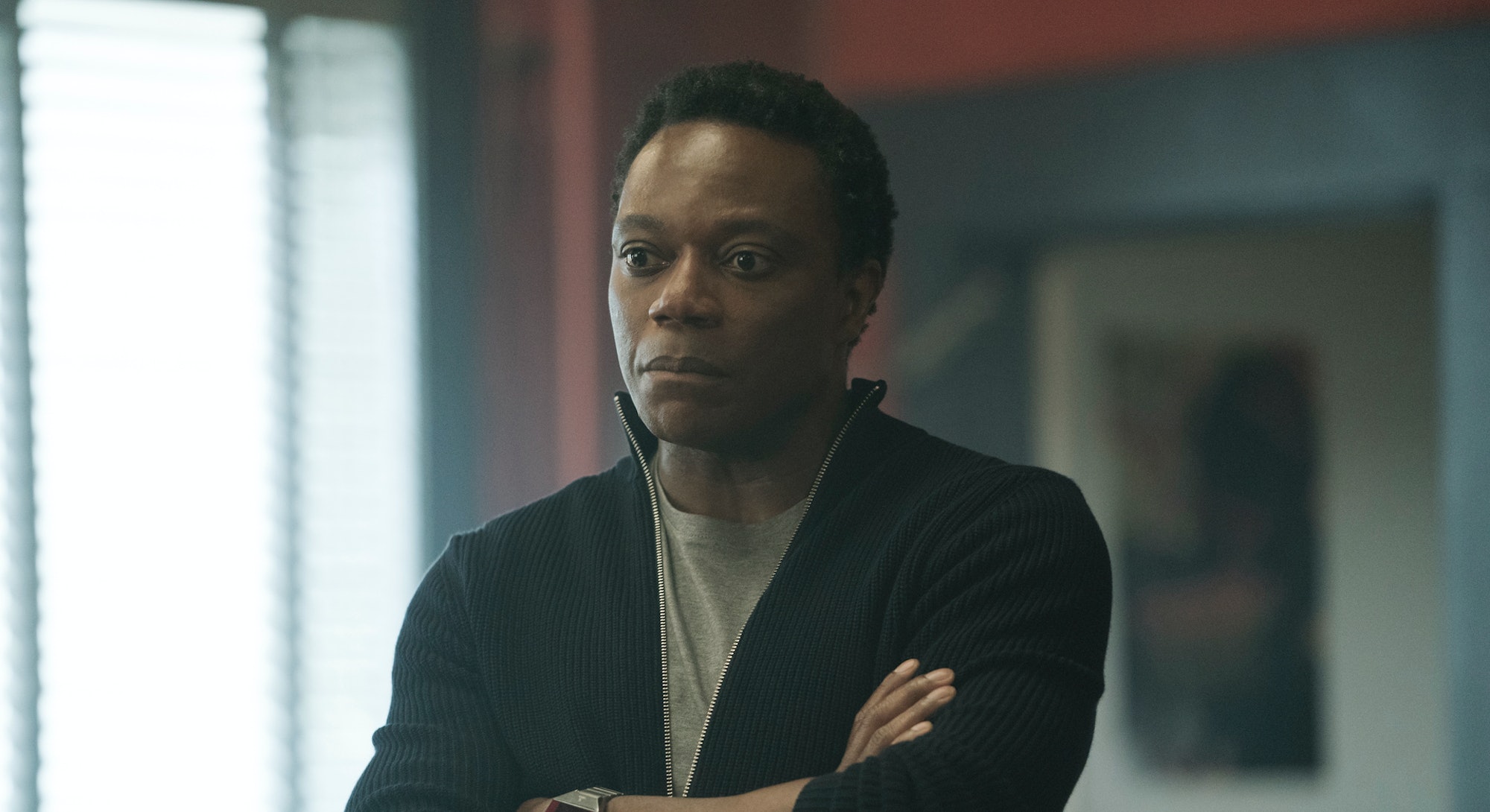 The Nigerian-British actor and star of the DC superhero series Peacemaker knew in his bones the show’s riskiest element — an opening title sequence full of intentionally stiff dancing performed by the show’s ensemble cast — was going to take off.

In an era when TV titles are either surrealist visuals set to instrumental music or nonexistent, Peacemaker rocks with its guns out to glam metal band Wig Wam and its 2010 single, “Do You Wanna Taste It.”

“There’s a world where it could have gone horribly wrong,” Iwuji tells Inverse via Zoom, “But I’m not surprised. I will put up my hand and say I genuinely thought it was gonna work. We were just having the time of our lives doing it.”

Peacemaker makes a bang in more ways than one. Created and developed by The Suicide Squad director James Gunn, Peacemaker on HBO Max is the first television show spun from the DC Extended Universe. Ex-WWE star John Cena reprises his Suicide Squad role of Peacemaker, an ex-convict turned vigilante agent who works for, not with, a subdivision of Task Force X to stop an alien invasion.

Peacemaker takes assignments from hardened superior Clemson Murn, played by Iwuji. A subordinate of Task Force X figurehead Amanda Waller (played by Viola Davis in the DC films), Clemson is in many ways like his boss. Both keep their guards up through icy cold exteriors and well-kept secrets. For Clemson, that includes his true identity and purpose at Task Force X.

Peacemaker exists to give deeper depth to a character who didn’t have the time to evolve in The Suicide Squad. Through that lens, Iwuji thinks there’s a critical difference separating Clemson from Amanda Waller.

“The great thing about the series is that you see sides of Peacemaker we didn’t see in The Suicide Squad,” he says. “You see there is something worth saving. Murn recognizes that. He’s so stern because he has to keep them on track, but there’s a side of him that allows them to grow. In that sense, he has an edge over Waller. He’s a little bit [more] nurturing.”

In an interview with Inverse, Chukwudi Iwuji unpacks Clemson Murn’s secret and Peacemaker Episode 7’s shocking twist, as well as how different Murn is from his ultra-secret character in Gunn’s next superhero epic, Marvel’s Guardians of the Galaxy, Vol. 3.

Spoilers for Peacemaker Episode 7 ahead.

Peacemaker Episode 6 reveals Clemson is a “butterfly,” and he’s running an operation to stop the butterfly invasion. Why do you think Clemson is involved with Task Force X despite their opposition to his species?

In his mind, his species are wrong in what they're trying to do to the Earth. His species would say they were right and that they have a reason [for invading Earth], especially when you think of the ecological nuance of what we're doing to the Earth. But with him, he decides that's not an excuse to give up on humanity. That's the most beautiful thing about Clemson Murn. After all the violence and the dry humor, there's this deep humanist who believes in humanity regardless of all the reasons not to. We certainly give ourselves a lot of reason not to believe in ourselves. But he believes in us even if we don't.

Why did Clemson keep his butterfly identity a secret from most of the team? I would think building trust in a team means having no secrets.

A lot of that decision is taken out of his hands because of circumstances. Left to his own devices, Clemson wouldn't have told anyone he was a butterfly. If you go back in the series, you'll find certain events happen to reveal him to be a butterfly. Certainly Episode 5, the way Adebayo finds out, he didn't want that. Luckily for him, I think he's able to explain to them again, because of this humanist side of him, why he is their most important ally.

Who do you think Clemson Murn was before he was inhabited by his butterfly?

We don't get details, but we get a lot of allusions. He was a superstar in Black Ops. Even Peacemaker knows his name. Everyone knows his name. “Murn.” And he's made very dark decisions in the past. Clearly, he was not a good guy. The original Clemson Murn is someone that decided that, “I'm a soldier, I'm given a mission. And if the mission is for the betterment of the world, for the United States, I will get it done.”

He is in many ways Peacemaker’s idea of himself. “Anything for peace.” The original Clemson is when the concept of peace goes wrong, where peace stops being about the true meaning of the word but starts becoming about patriotism, nationalism, and military might. A lot of what the team sees him as is the original Clemson Murn. The stuff he keeps to himself — the heart — is what the butterfly brings to him.

Clemson’s death in Episode 7 puts the team in a really tough spot. Do you think the team will make it alive after the finale?

I think Clemson would like to believe, like every parent does if they're lucky to leave this mortal coil before their children, they've left enough of their DNA to let them go and do their thing. I think that’s part of what happens to Clemson. Harcourt and Adebayo, they’re leaders of that team. They have to [survive] for humanity’s sake. He has to feel that he’s done enough to let them know they can do it. His final words, “It’s been an honor to serve with you,” I think he has complete faith in the fact they can do it. His sacrifice is worthwhile.

How would you compare Clemson to your secret character in Guardians of the Galaxy Vol. 3?

I'm allowed to say very little. He is very powerful. He's one of the more interesting characters you'll come across in the Marvel Universe. He is very different from Murn. It's night and day. There is a complete difference in the delivery, a complete difference in their motivations. But he is a lot of fun to play. And it’s a dream for me. When I think of the culmination of reading comics as a kid and watching The Avengers, this character is exactly the character I would want to enter the universe playing. I can't tell you any more, only that he's a lot of fun.

Clemson Murn is visibly inspired by a lot of “Men in Black” tropes from spy movies. As an actor, how did you spin Clemson into your own creation?

I got all my clues from James' writing, actually, from just three pages of text sent to me for the initial audition. I never met James until we filmed. But there was something about his writing that I immediately recognized, the dry, simple, taciturn, dark delivery. It just made sense to me instinctively. It was there in the writing.

That was what my building block for it was, a guy that keeps things close to his chest. Of course, we got the chance to read all the episodes before we started shooting, and that solidified my idea about him. He has this black operations background, so there are a lot of demons he has to keep in check. There's an efficiency about him. They're good at what they do. They don't talk unless they have to. They’re leaders because they make the hard decisions.

All those clues were in the writing, and I just let my imagination [run]. The years of watching classic movies from The Guns of Navarone to Where Eagles Dare to Magnificent Seven, all those things you watch as a kid, they’re sitting in your memory and something comes out when you call upon it.

You mention loving comic books. What did you grow up on?

We lived in Lagos. Comics would come in from England, and there were stacks and stacks. There was a lot of Spider-Man, Submariner, a lot of Cloak and Dagger. There was a lot of Daredevil. I grew up with Daredevil actually being my favorite comic book guy. I got lost in the rivalry with Kingpin. There was a lot of Batman. Then there was Archie. Even at Yale, I used to wake up at 10 a.m. on Saturdays for X-Men. That’s the only show I would wake up, watch, and go back to sleep because it was college. I literally would wake up for X-Men.

Did you ever hear of Peacemaker?

Did you know Guardians of the Galaxy?

That’s actually a long story for me, but yes, I did.

I never knew anything about Guardians of the Galaxy. I think James does go and find the obscure ones. I now realize the treasure trove of comics we owned that we didn't think about. You’d read them and just chuck them away. Now it'd be worth so much money. That’s the beautiful thing about TV and film; it’s forever. It’s wonderful to be attached to such innovations.