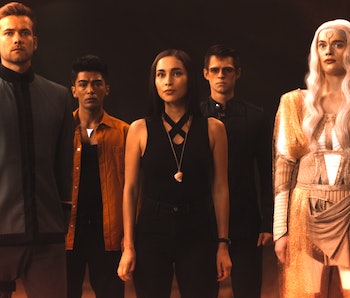 The crew of the Dauntless has gone renegade. The Season 2 finale of The CW's cult sci-fi hit is a game-changer on multiple levels. Not only did Jax resolve a major plot point that's been on the table since Season 1, but the status-quo of the Dauntless crew is now irrevocably different. If Pandora was a kind of pseudo-Star Trek tribute prior to Season 2, the series has now set-up Season 3 to be way more like Star Wars.

But within all of those internal shifts, Pandora has to find its identity as a sci-fi series alongside massive shows like The Mandalorian and Star Trek: Discovery. While many popular genre shows rely on callbacks, Easter eggs, and crossovers to sustain interest, Pandora has to stay true to its own emerging mythology. Or as showrunner Mark A. Altman tells Inverse, "as much as we’d like to just bring back Boba Fett [in Season 3], we don’t have that option."

After the big Season 2 finale, here's what Altman says Pandora fans can expect from Season 3.

Mild spoilers ahead for Pandora Season 2.

"Sci-fi is inherently a cerebral genre," Altman says of his approach to Pandora. "That’s our idea as well; to deal with some heady ideas, but wrap them in fisticuffs, action, and romance."

Pandora has to appeal to a broad audience, which isn't already conditioned to enjoy a story set in the Final Frontier or a galaxy, far, far away. At the same time, Altman's Boba Fett joke highlights how modern sci-fi TV differs from that of decades past. Inviting viewers to a truly new sci-fi universe can be a hard sell, requiring a series like Pandora to look to similar risk-taking shows for inspiration.

Altman says Pandora contains some of the "aspirational" values of Trek and is poised to be more "swashbuckling and mission-based" like Star Wars. But unlike those two franchises, it has to earn its own keep. Other than The Orville and The Expanse — which is poised to end in 2021 — Pandora is pretty much the only non-legacy space opera in town.

"Babylon 5 and Battlestar Galactica were huge inspirations for us," Altman says. "What Joe Straczynski did with Babylon 5 was marvelous. Sometimes the changes he made were necessitated by cast issues as well as budget, but he was usually able to make it work effortlessly. It was the same with Ron Moore’s brilliant Battlestar Galactica. Ron was unafraid to really push the envelope and reinvent the paradigm. That’s something I’d like to do more of in future seasons of Pandora."

The cliffhanger of Pandora Season 2 turns the crew of the Dauntless into renegades on the run, and Altman acknowledges Season 3 will have a very different feeling than what's come before it. With the disappearance of the show's lead character, Jax (Priscilla Quintana), Season 3 leaves the door open for a bunch of new characters.

"We’d certainly plan to expand our core cast while introducing some new characters and alien races," Altman explains. "But we’re in a tough spot, we don’t know who to trust, and we’re out there in the cosmos, alone with a damaged ship and not a lot of allies."

Altman is referring to the plight of the crew of Dauntless, but the renegade status of the characters could be a metaphor for the series as a whole. Pandora has a loyal following, and with Season 1 streaming on Amazon Prime, that following could grow. But like Babylon 5 in the '90s or Battlestar in the early aughts, Pandora can't sit on its narrative laurels to keep things going.

"We leave Season 2 with a bunch of cliffhangers that really set up the stakes for future seasons including the reveal of Shral as a Zatarian sleeper agent, the disappearance of Jax and Tierney’s mother," Altman says. "But things might feel a little more Guardians of the Galaxy going forward, while retaining the heartfelt, emotional stories and serialized character drama that’s become our stock in trade."

"We’re all hoping for a third season pick-up, and we’ve been very gratified at how successful the series has been globally," Altman says. "Everything in Season 2 we wrote before the election. So it was very much informed by the world in which we were living in pre-November 3rd. Season 3 will lean into the space adventure even more. It will be bigger, more epic and hopefully speak to our audience and who we are as a race today."

Pandora Season 2 is streaming on the CW app.