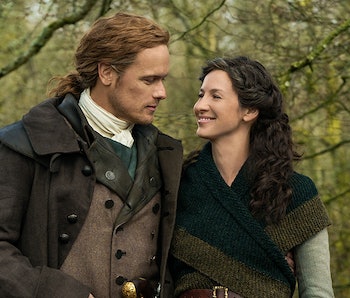 After previous seasons ended in turmoil, heartache, and war, the Outlander Season 4 sendoff finally gave fans a bit of a reprieve. Claire and Jamie returned home in time to meet their new grandson, Roger was finally free thanks to Young Ian, and the Fraser family was finally reunited.

That doesn’t mean the upcoming season of Outlander, based on Diana Gabaldon’s The Fiery Cross, will continue in this tranquil vein. The drama must continue and Season 4 left a number of loose plot threads that could carry into the new season. Here are four burning questions we still have ahead of Season 5:

4. Will Jamie hunt down his godfather Murtagh?

Season 4 ended with Jamie receiving an order from the Army to commission a militia to hunt down his godfather Murtagh. It’s possible Jamie could find a way around it and stop Murtagh from being captured... if Murtagh manages to live until the end of Season 5. In the books, he's already dead. It’s possible Murtagh could die before Jamie finds him, but his fate is up in the air.

3. Will Claire’s cat be introduced in Season 5?

Yes, Adso the cat will appear in Outlander Season 5. Adso first appeared in The Fiery Cross, so it seems fitting that the kitten’s debut would happen during the season based on that book. In the book, Jamie gifts Adso to Claire to keep the rats away from their North Carolina land. While it’s unclear if Jamie will have the same reason to give Adso to Claire, an image from an upcoming episode seems to indicate that it’ll happen just as it does in the books. Adso hasn’t yet appeared onscreen, but he’s adorable.

2. Will Jamie and Brianna finally get a moment to bond?

Jamie and Brianna didn't meet until the second half of Season 4, and their relationship proved far from perfect. After finding out that Brianna was raped, Jamie beats up Roger, believing him to be the man who assaulted his daughter. Brianna slaps Jamie in the face, and they have yet to truly reconcile. Jamie and Claire were both absent during the birth of Brianna’s baby. Afterward, Jamie didn’t get to hold his grandson, either, and it seemed like they were still on shaky ground. Here's hoping that Season 5 offers them a few moments so that their relationship evolves.

1. Will Young Ian come home to his family?

Young Ian stayed with the Mohawk tribe after sacrificing his life for Roger’s freedom. While it seems Ian has found where he belongs, it’s unclear if he'll return to Fraser's Ridge to see his family again. Young Ian is still alive in The Fiery Cross, though, so it’s possible he’ll show up, especially if he doesn’t want to face the ire of his mother Jenny.