“You’re my brother too.” 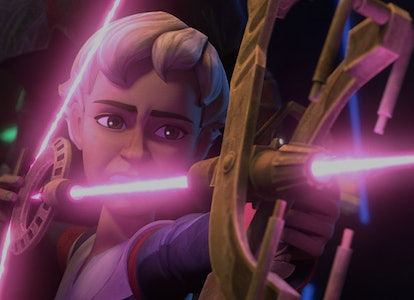 Every kid remembers the majestic awe of seeing Star Wars for the first time. To the characters, the streaking stars of hyperspace is just another day in the galaxy. But in the pilot of Disney+’s The Bad Batch, Omega, a young girl experiences it for the first time, just as we did. It’s more something evoking the fan experience. It’s a symbol of Omega paving her own path, one that would otherwise be spent as the base code for clones.

The clones of the earlier Star Wars: The Clone Wars were a work of television mastery. Through ingenious character design and voice acting, countless identical beings miraculously developed their own unique personalities even when you couldn’t always tell them apart.

In the Star Wars mythos, there is a group of “defective” clones, known as “The Bad Batch.” Because it’s Star Wars, they now lead their own streaming series spinoff. Exempt from the mass Jedi genocide of Order 66, these five Clone Troopers negotiate a new life after a galaxy-wide war crime. Along the way, they find a sister. In their first adventure, the Batch meet a Kaminoan “medical assistant,” a young blond human clone named Omega, voiced by Michelle Ang.

SCENE STEALERS is a countdown that salutes the unforgettable small-screen characters of the year. Omega is #15.

In the vast lore of Star Wars, children are unheard of on Kamino. Clones artificially age faster; they’re mass produced soldiers, after all. But our heroes learn Omega isn’t just another clone. She’s a pure, unaltered clone of Jango Fett. Like Jango’s “son,” Boba, Omega is a perfect copy who will age naturally. With the blood of a bounty hunter literally coursing through her veins, she stows away on the Bad Batch’s ship, and together they set off to forge their own destiny.

While most clones in Star Wars are voiced by Dee Bradley Baker, Omega’s voice belongs to New Zealand actress Michelle Ang, known elsewhere for her role in another franchise spinoff, Fear the Walking Dead. Unlike Baker, Ang’s Kiwi accent is native, a shared trait with Jango/Boba Fett actor Temuera Morrison, whose likeness is given to all Clone Troopers. Ang’s shared background with Morrison gives her a level of authenticity you can’t simply manufacture.

For her part, Ang knows there’s an authenticity to Omega, even if she wasn’t naturally born with traits but had them chosen for her. “The character had this real innocence and naivety but also the core of someone who was strong in her internal compass and had morality,” Ang told StarWars.com. “What resonated was this push and pull for someone who’s experienced nothing and yet wants to stand for everything.”

“At no point is her identity questioned”

Omega adds a wrinkle to “Chosen One” tropes that Star Wars is so famously attached to. Unlike Luke, Anakin, or Rey, she’s not a kid plucked out of obscurity through the Force. She was created to be important, as the source code for a new generation of clones. But she refuses to let that be her lot in life. Just like her “brother” and “father,” she seeks her own way in the universe. If this spin-off had a spin-off, an Omega-led series would likely be a kid-focused adventure serial, like the failed Youngling series that had a backdoor pilot in Clone Wars. With Star Wars television maturing as it is now, Omega could be the key to a new generation of fans.

Omega’s impact on Star Wars is deeper than most fans perceive. As a clone of Jango Fett, she should, hypothetically, look like him. Instead she’s blonde, and most importantly, a girl. Her existence as a “clone” who doesn’t look like the original article begs good questions about the fundamental philosophy of her visual design. As a genderfluid person, Omega represents to me the ideal of a gender-non-conforming life. Not only is she free to express herself however she wants, at no point is her identity questioned. She was created to be the ultimate soldier, but what she’s grown to be instead is an emotionally intelligent, insightful, however naive young girl.

Even if you don’t consider Omega a trans character (valid, given that a complete understanding of Star Wars’ cloning science is mystifying), Omega is a feminist icon. From a certain point of view, she’s someone created for literal reproduction only for her to challenge that purpose. Her story is about reproductive justice, as a young girl forging a life outside breeding stock.

In defiance to male-centric narratives prevalent in the Star Wars universe, Omega strikes the delicate balance between “girl power” and a girl’s power. Just as each clone in the Batch has a “flawed” mutation, she’s a “disappointment.” But she’s not letting anything stop her. Defying the narrative of many “Chosen Ones” in Star Wars before her, she’s not letting herself be defined by a purpose she was born to fulfill. She’s living to find out who she wants to be.

Star Wars: The Bad Batch is streaming now on Disney+.