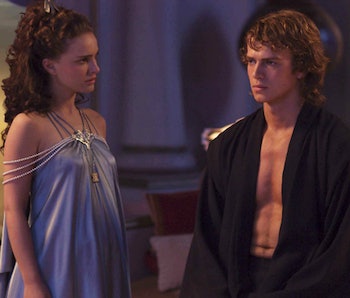 The Star Wars prequels are a divisive subject. While they included a lot of superfluous content — looking at you, Jar Jar — the second trio of films set in a galaxy far, far away also avoided some pretty obvious plot points and opportunities for character development.

Lucasfilm has the opportunity to fix that in the upcoming limited series Obi-Wan Kenobi, the upcoming spinoff focused on the titular Jedi's journey in the aftermath of Revenge of the Sith. Let's break it down.

Redditor SettyDub suggests the Naberrie family will be featured in Kenobi. The Naberries, Padme's family, were originally featured in a scene of Attack of the Clones, but the family meal was left out of the final edit. Obi-Wan could visit them in order to explain what happened to their late daughter and get more information on Anakin's path as well.

This scene could take place on Naboo, but it's unlikely that Obi-wan would be willing to leave exile on Tatooine. Instead, it's more plausible that the Naberries could seek him out, forcing him to confront his past and the very real casualties of the events of the prequels.

At this point, Disney has revealed very little about Obi-Wan Kenobi's plot. Obviously, someone or something has to come along and stir up some conflict for Anakin's former master — Ewan McGregor moping around the desert for several hours probably wouldn't make for the most interesting television. A visit from the Naberries would kickstart some sort of conflict where he has to explain why they can't seek out their grandchildren.

The theory offers many other options for plots exploring the Naberries and their connection to the nine-film saga. The deleted Attack of the Clones scene also reveals that Padme has a sister and some young nieces. If these characters are expanded in Kenobi, we may see a scenario where the family chooses to side with the Rebellion, meaning Leia could possibly have worked alongside her older cousins, without being aware of their familial link.

Without her family, Padme serves as a tragic heroine to get caught up in Anakin's wake. Yes, she's a queen and later a senator, but her political life and romantic life is entirely different from her family life. It makes her passing all the more heartbreaking, but that's why it's so essential for Obi-Wan to see it — not even exile on Tatooine is enough to escape the destruction he feels so much guilt over.

The Inverse Analysis — At this point, it's not clear whetherObi-Wan Kenobi will be more narratively driven or episodic, like The Mandalorian. If this series decides to include more one-off adventures, a visit from the Naberries would make the perfect conflict as Obi-Wan balances hiding his true identity from those around him while still giving grieving parents peace of mind.