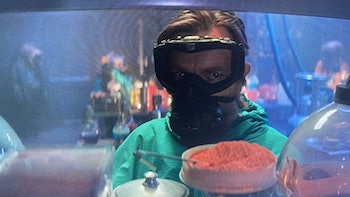 Anakin Skywalker lives! It may not be news to Star Wars fans, but for Ben Kenobi, one piece of information about his former padawan comes as a huge shock. But why? The ending of episode 2 of Obi-Wan Kenobi contains a revelation for the titular Jedi master himself, but also for the audience.

So the question is: Why didn’t he know this already? Spoilers ahead for Obi-Wan Kenobi Parts 1 and 2.

After successfully saving young Leia (Vivien Lyra Blair) from a near-fatal fall, Obi-Wan is about to escape the clutches of Inquisitor Reva (Moses Ingram) when he’s faced with a startling truth. Reva is there to bring him directly to “Lord Vader.” This blows Obi-Wan’s mind. And Reva says “Anakin Skywalker is alive.”

We all know this. But why doesn’t Ben? The answer is seeming, simple: Obi-Wan’s self-imposed isolation also includes a news blackout. Not only does he not spread information about himself around, but, he also doesn’t appear to take in any new information about what’s going on in the galaxy. As one hapless citizen says in the first episode, Tatooine is in the Outer Rim, and not really part of the Empire at all. This would mean machinations about the Empire’s inner workings just haven’t reached Tatooine. News travels slowly in Star Wars, and often inaccurately, and even by the time of The Last Jedi, you had the First Order relying on a game of telephone for basic information about hugely important events.

TLDR: There’s a long tradition in Star Wars that establishes that people have huge gaps in basic current events, either through ignorance, a lack of media literacy, huge galactic distances, or misunderstandings. Arguably, most Star Wars plot points revolve around characters simply not knowing something, very often about their family history.

But, on top of all of that, the biggest reason Obi-Wan doesn’t know Anakin is alive is that the last time he saw Anakin Skywalker in Revenge of the Sith, Ben literally left him for dead. Ten years later, in Episode 2 of Obi-Wan Kenobi, he learns Anakin is alive. This is the first time it happens. This means, retroactively, in A New Hope, Ben has known about Vader being Vader for a long time.

The TV series Star Wars Rebels established that the Inquisitors work directly for Darth Vader. However, those Inquisitors are operating about five years after the events of Obi-Wan Kenobi, so it’s unclear if some of the way they work changed during that time. (It’s also unclear if they switched to a new Grand Inquisitor since this one seems to have been killed?)

But, what’s interesting here is that Reva refers to Lord Vader as “Anakin Skywalker,” mostly to mess with Obi-Wan. Why would she know that detail about him? Most fans have assumed Darth Vader kept his previous life as Anakin Skywalker a secret. So why would Reva know about it? As of Episode 2 of Obi-Wan Kenobi, we simply don’t know yet. That said, it seems that Reva’s entire backstory could eventually be revealed in future episodes, and give us more details than we could have possibly imagined.

Here’s one theory: In Episode 2, Obi-Wan makes a point of telling Leia that several Inquisitors were former Jedi, who turned to the Dark Side. Reva’s background relative to this recruitment process is unclear. On top of that, the very first scene of Obi-Wan Kenobi shows us younglings trying to escape from Order 66. This is a new scene, and not reused footage from Revenge of the Sith. Why show us this?

Well, Reva is fairly young, and it’s conceivable that, maybe, she was a Jedi youngling during Order 66. If so, did Anakin train her himself? Is Reva Anakin’s secret Sith apprentice? Or, is it simply that she was there in the Jedi Temple, and saw the face of Anakin Skywalker, killing other Jedi?

In any case, the mystery of why Ben didn’t know that Anakin was alive is pretty much solved. But, the bigger mysteries in Obi-Wan Kenobi are clearly about Reva and her connection to the most famous Dark Lord of the Sith of them all.