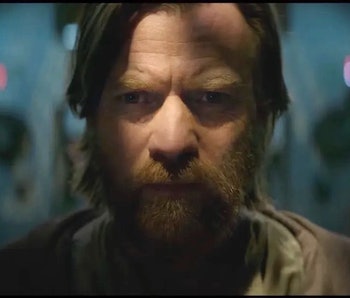 One Jedi Knight could make a shocking return. In the third episode of Obi-Wan Kenobi, a huge hint at the fate of several Jedi — presumed dead — points toward a possible, unexpected reunion for Ben. Although Kenobi is trying desperately to get in touch with the spirit of Qui-Gon Jinn, one Jedi, who is very much alive, might be the key to everything, and maybe even lead us to... Baby Yoda?

Spoilers ahead for Obi-Wan Kenobi Episode 3.

Who is Quinlan Vos in Star Wars?

When Ben and Leia are shown the hidden Jedi sanctuary on Mapuzo, Tala tells them “some call it the Path.” Eventually, all the Jedi are smuggled to a planet called Jabiim where they’re “given new lives.” At this moment, Ben notices something written by a Jedi he knows, Quinlan Vos. Obi-Wan says, “Quinlan was here?” And Tala tells him that Quinlan is helping their cause, helping to smuggle younglings away from the Empire. Obi-Wan recognizes Quinlan because he actually knows this Jedi very well.

First formally introduced in the comics Star Wars: Republic, Quinlan Vos was an unorthodox Jedi, who, like Anakin, tended to do things his own way. Although the comics in which he originated are no longer canon, he did appear in The Clone Wars, working side by side with Obi-Wan Kenobi. Prior to The Clone Wars, the only canonical reference to Quinlan was in Revenge of the Sith when Obi-Wan tells Anakin that “Master Vos” has moved his troops.

However, the most relevant detail about Quinlan comes from the 2015 in-canon novel Dark Disciple by Christie Golden. In that book, Quinlan turns to the Dark Side while trying to infiltrate Count Dooku’s operations and falls in love with Sith assassin Asajj Ventress. Eventually, Quinlan returns to the Light side after Ventress is murdered, and Obi-Wan specifically asks the Jedi Council to reinstate him. So, like Obi-Wan, Quinlan has a unique perspective on how the Jedi failed the galaxy, and why the Dark Side is so tempting.

This off-hand reference to Quinlan Vos may seem like a cool deep-cut Easter egg, but Ben’s familiarity with Quinlan and the fact that he reads an inscription on the wall, presumably written by Quinlan, could suggest we’ll actually see this specific Jedi in a future episode of Obi-Wan Kenobi. Here’s why: Obi-Wan fixates on this quote, “Only when the eyes are closed can you truly see.”

This could mean many things.

But, oddly, when Obi-Wan reads this quote aloud, Leia asks, “see what?” And Obi-Wan says, “The Way.” To be clear, in closed captions, “The Way” is spelled like that, capitalized.” Does this refer to the Way of the Mandalore? Does this mean that Obi-Wan Kenobi is setting up a crossover with The Mandalorian? It’s certainly possible. Although Obi-Wan Kenobi takes place about 19 years before the events of Mando, Ben is very familiar with the Mandalorians. He was in love with Satine, Bo-Katan’s sister, who once ruled Mandalore. And, on top of that, if Quinlan Vos is smuggling younglings, we may finally get another Mando mystery solved.

If Quinlan Vos is helping save Jedi younglings, then we may get an answer to a question that’s been nagging since 2019: Who saved Baby Yoda from the Jedi Temple during Order 66? If Obi-Wan comes face-to-face with more underground Jedi, including young ones, and he meets Quinlan Vos, who's to say an even younger Grogu might not make a cameo, too?

The only question beyond that is simple. If Quinlan Vos does appear in Obi-Wan Kenobi, will the Force bless us with the perfect actor? And could that perfect actor be... Jason Momoa?

Inverse may receive a portion of sales if you subscribe to Disney+ through the link.