"Being a trans person in the public eye, visibility is activism." 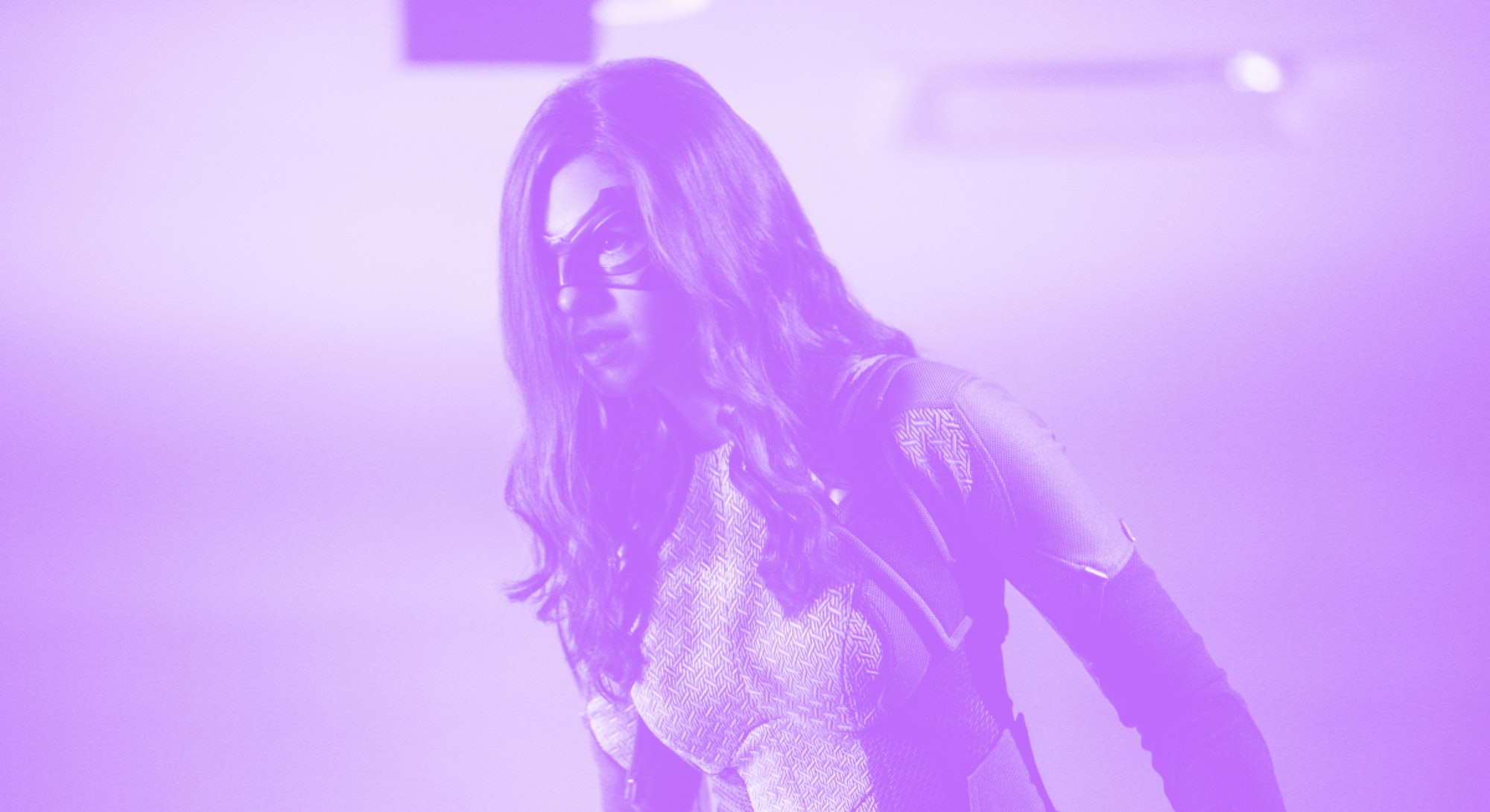 Nicole Maines needs to get up, up, and away.

With the coronavirus pandemic forcing film and TV productions to cease, including Maines' regular gig on Supergirl on The CW, social distancing has encouraged the 22-year-old actress to contemplate a retreat. But even if it's for difficult reasons, it's a good time for Nicole Maines to pause.

At the end of her second full season as a TV superhero, Maines shoulders a big responsibility for any young actor, let alone the first transgender woman to occupy that space. In 2018, Maines made history when her character Nia Nall, a clumsy CatCo reporter with psychic powers, became "Dreamer," a new spin on a tall, blonde, C-list superhero named “Dream Girl” from DC Comics history. Both Maines and Nia are trans, a tall leap in a single bound for visibility of the trans community in a still mostly cisgender male space.

Maines, who was an activist prior to becoming an actor, equates visibility to activism.

"Every role I play, every act of visibility is radical. It is activism," she says. "In this political climate, we have an administration that is actively trying to suppress trans identity and trans bodies. Being a trans person in the public eye, visibility is activism."

When I catch up with Maines over the phone, a few days have passed since a momentous March 15 Supergirl episode, "Reality Bytes," aired on The CW. The episode explores violent discrimination against the trans community, and it was an hour of television that heavily featured Maines both on camera and behind the scenes.

The episode reinforced for Nicole Maines how great power means great responsibility. Now she's home alone in quarantine and stuck with me in a phone interview, but she’s in good spirits.

"Being out there and being seen is an act of resistance against that transphobic mindset," Maines says. "It's an act of empowerment."

In "Reality Bytes,” Dreamer confronts a serial catfisher, Gregory Bauer (played by guest actor Pierson Fode) who targets and physically assaults trans people. He gets close to Dreamer when he lures Nia's roommate, Yvette (Roxy Wood), and reveals his ultimate goal is to scare Dreamer into abandoning her role as a superhero.

Maines says Gregory was "comments section commentary," an amalgamation of angry men precious about comic book canon but dismissive towards the well-being of minority populations.

"I pitched [to the writers] he's a leftover Agent of Liberty from last season," Maines says. (Last season on Supergirl, the heroes fought Agent Liberty, a right-wing politician hellbent on keeping aliens out of Earth.) "But he doesn't need a backstory. What matters is that he hurt Yvette for who she is. We wanted to work in rhetoric we see a lot, especially in the comments section.”

For Supergirl's writers and producers, Maines was a resource. The episode used both real-world statistics on trans violence as well as the cycle of "gay panic" in its bigoted antagonist.

"It meant everything to me to do this episode,” Maines says, “and tell it as honestly as we could.”

A scene where two characters, one of them Supergirl, talk about the mortality rates for trans women, “we used the actual statistics from 2019, which recorded 24 deaths from hate-related violence.” The characters also point out how those numbers may be higher, as not all incidents are reported and police often misgender victims.

"We wanted to show the reality for trans women and specifically trans women of color," Maines says.

Despite the diversity of the Supergirl writers’ room, they lacked the perspective Maines has as a trans woman.

"They're aware they have not lived the trans experience,” she says. “They were including me in the process and making sure I was okay with everything. Is this language okay? Are we tokenizing too much? It didn't feel like we were using this episode and this kind of violence as just a literary tool."

There was effort in fleshing out the villain, too. Maines says Gregory Bauer ("a serial killer name," she jokes) echoes the arc of violence from straight men against trans women. "He sees this hot new superhero, Dreamer, come out as trans and then that gay panic sinks in.”

Faster than a speeding bullet, Maines unpacks the "still admissible" defense that shows up in assault cases. "People can claim that they went home with a trans woman, find out she's trans, panic, and use that as an excuse for attacking and often killing her.”

"We wanted to show this guy going through this: I'm not gay and I have to secure my masculinity,” Maines says. “He was so threatened he had to prove himself by taking down a superhero when he pulls a knife on Dreamer."

Despite the importance of the episode’s subject, Maines still laughs about that knife. "Like, dude, I fought the Anti-Monitor a few episodes ago."

To Maines, the episode was “trying to hold up a mirror.” There was pushback from unconvinced viewers, of course. “Wow, agendas,” she sarcastically quotes, now all-too-familiar with the tone of internet trolls. “If you're the kind of person using the same phrase, this is for you, and it was for people sitting at home who are not aware what the trans community is facing."

Maines observed a self-fulfilling cycle ahead of the episode’s premiere when she perused social media comments and tweets. “They were doubting this was realistic. That's why this episode is so important.” And so, armed with real statistics and the real circumstances that are the “horrors of dating for trans women,” Nicole Maines used Supergirl to reveal the “threat of violence we face, trans women of color especially.”

“It's scary,” she adds. “It's about showing people: This does happen, and you have to be aware of it."

“That opened my eyes ... that she can cause that much disruption.”

Maines’ origin story begins far before Supergirl. Born a twin, Nicole was assigned male at birth and grew up in Adirondacks, New York before moving to rural Maine. She and her twin brother Jonas were adopted by Wayne and Kelly Maines, the latter of whom was the distant cousin of Nicole and Jonas’ biological mother, who gave birth at sixteen.

As detailed in the 2015 book Becoming Nicole: The Transformation of an American Family, Maines was Susan Doe in Doe v. Regional School Unit 26, one of many landmark legal cases that brought transgender civil rights into public light. Maines and her family sued her elementary school when the district prohibited her from using the girls' restrooms. In 2014, the Maine Supreme Judicial Court ruled the school was in violation of the state's Human Rights Act.

In 2015, Maines made her television debut in a guest role on Royal Pains, playing a transgender teenager whose hormones posed a risk to her health. In 2018, she landed the role of Nia Nall/Dreamer on Supergirl, an ex-political speechwriter turned journalist who discovers she has the power of prescient dreams and astral projection.

Since her series debut, Nicole Maines has been the hero Supergirl needed. At a January 2018 DC Comics event in Washington D.C., producer Greg Berlanti admitted that his “Arrowverse” shows lacked a more complete spectrum of representation.

“We don’t have an active trans character across the shows, you know," he said, "And so I still feel behind the times every day on that issue.”

Months later, Maines’ casting was announced. She remembers a mixed response that only confirmed how important the role would be. "There were people who were excited about a trans superhero, and people who rolled their eyes going, Ugh, agenda! I'm like, it's one superhero. One! That opened my eyes to how big an impact one superhero can have, that she can cause that much disruption."

But even after dozens of episodes, including one giant crossover event, Maines is still getting used to being a superhero, and it’s not easy.

"Especially when I have an addiction to DoorDash, and I sit around eating junk food," she jokes. "It's a pressure I put on myself. What is the standard of a superhero? I have to be in top shape, but I am not."

Maines didn't even grasp the gravity of her role even when she got the part. "It didn't sink in for a long time. So much in my life has happened where I did not think things would go the way they do. You're gonna be a superhero? Okay, whatever."

When Maines learned she would make history as TV’s first transgender superhero, she was in the middle of a nap. "When I got the part, I was like, 'Oh. Word.' I went back to sleep because I just finished a night shoot. It took weeks to sink in. I don't know if it'll ever."

But Maines gets nudges of it "sinking in" on the set of Supergirl. She can't wait to get back.

"In the 100th episode, I'm shielding the group against Reign. We had the fan going and debris everywhere, hair whipping. I gave a nod to Supergirl. And then I went, 'Oh, this is what we're doing. This is cool.'"

Supergirl airs Sundays at 9 p.m. Eastern on The CW.