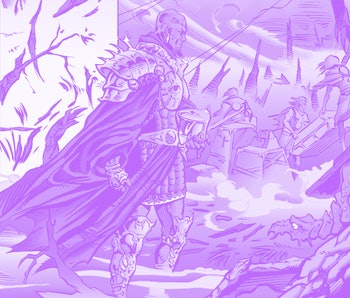 The Star Wars fandom has gleaned a treasure trove of information from Rae Carson's official novelization of The Rise of Skywalker, from basic Exegol logistics to the fact Rey's dad was a Palpatine clone. Now there's another cache of new canon fodder in the The Rise of Skywalker junior novelization, which adapts the story for younger readers. In this novel, an offhand name-drop brings an entire section of Sith history into the official Disney lore.

Redditor TheMastersSkywalker noticed the name in a list of statues Kylo Ren recognized on the walls of Exegol. Many of these names are entirely new, save the last one: Sadow. Naga Sadow has a long and illustrious history detailed in the Star Wars comics, but those are considered "Legends" and not technically canon. This mention brings Naga Sadow, and his story, into official Star Wars story.

Naga Sadow was a Sith Lord from the Golden Age of the Sith, 5000 years before the events of A New Hope. He appeared in Dark Horse's Tales of the Jedi comic series, which ran from 1993 to 1998. His story is one of Machiavellian politics and intrigue, forming a precursor to the kinds of double bluff intrigue Sheev Palpatine would practice millennia later. Half human and half Sith (the species), Sadow served on the council of Sith on the planet Ziost alongside his mentor Simus, who was at that point a severed head kept alive through Sith magic. It's a wild premise, but what happens next is even less predictable.

After the death of Dark Lord of the Sith Marka Ragnos, Ludo Kressh assumed the throne, but Sadow saw himself the true successor. His philosophy was one of expansion and colonization, while Kressh was very much for maintaining the status quo. He had no plan for taking the title until two Republic explorers arrived on Ziost and arrested him.

Sadow assembled a private army and slaughtered his fellow Sith in order to frame the explorers and stoke fear among the populus, prompting him to take over and usher in a new era of Sith expansion. In this sudden coup, Naga Sadow came head to head, if you will, with Simus, his former mentor, who he killed with a crude blaster with no remorse.

He let the explorers free, then stormed into the Sith Council, feigning fury at who possibly could brutally murder his former Master, using this act of sentimentality to ensure the trust of those around him. He then went on to lead the Sith to the brink of total domination when he was conquered by one of the explorers, Gav Daragon, and his longtime rival Ludo Kressh.

What does this new facet of canon mean for Star Wars as whole, though? It means the ancient roots of the Sith now have a fascinating and exciting history in canon. Seeing how the Star Wars cinematic universe has only covered a small section of the timeline, ranging only 67 years, it may mean it's time to go back: way back.

There are a handful of ways this ancient history could reach our screens. It may mean we'll see flashbacks to the formations of the Sith and Jedi in brief scenes in future movies or perhaps in a television series or standalone movie focused entirely on this character and his contemporaries. We already know that the franchise is looking backward, with the High Republic publishing initiative announced earlier this year due to take place two centuries before A New Hope. Integrating a character like Naga Sadow would be a much deeper dive into the past, but it would add a fascinating medieval element to the on-screen universe.

No matter what form it takes, exploring the roots of the Star Wars universe would add an entire layer of depth to the stories we grew up with.

The Rise of Skywalker is out now on digital and Blu-ray.