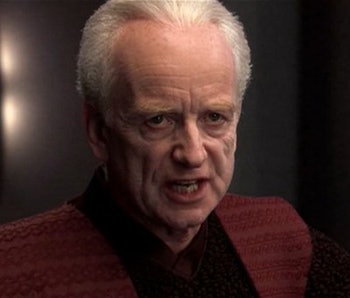 When we first meet Sheev Palpatine, the man who would be Emperor, he's already past his prime. This elderly character is still masterful and conniving, manipulating the Galactic Senate and the Jedi Republic like pawns. So what was Palpatine like before this? How did he learn the skills he implemented to overthrow the Jedi Republic as we know it? A forgotten comic-book character may hold the answer.

Palpatine was born a minor royal on Naboo, and it wasn't until his university years that Darth Plagueis converted him to the Dark Side. Even after massacring his family and taking the name Darth Sidious, he still kept his public persona as Sheev Palpatine, along with all his social ties to other noble families.

According to the non-canon comic Star Wars Republic #64, one of those friendships was with Ronhar Kim, the son of Vidar Kim, a prominent politician. Ronhar was Force-sensitive, and sent to train with the Jedi as an infant. He only returned to Naboo after the loss of his brothers and mother to comfort his father, then representing Naboo in the Galactic Senate.

By that point, Ronhar had reached the rank of Jedi Knight, but that still wasn't enough to defend his father when he was assassinated in a speeder. Ronhar caught the assassin, but a suicide injection kept him from getting any more information. It's unclear whether or not Palpatine was behind this assassination, but he certainly benefited from it.

Ronhar continued to work closely with Palpatine, and while this allowed the Sith Lord to master how to coerce the Jedi, it led to Ronhar's demise. During the Clone Wars, Kim and his padawan Tap-Nar-Pal joined the Army of the Republic. Upon learning about Darth Tyranus, otherwise known as Count Dooku, the two Jedi formed a plan to test every Senator for midi-chlorians to discover who is hiding Force sensitivity.

Who did they pitch this plan to? Palpatine, of course! He immediately dismissed it, saying other Senators would object to testing, and asked them to hold off on presenting their idea to the Jedi Council. They agreed to wait until after their upcoming mission to Merson. Unfortunately, they found themselves immediately mobbed by battle droids upon their arrival and died in battle.

Palpatine manipulated his supposed "friend" from the very start, using him as a gateway into the mind of the Jedi, into the Jedi Council, and, possibly, into the Senate itself through the assassination of his father. A modern adaptation of Ronhar's lifetime would allow us to trace Palpatine rise from young upstart to merciless Sith Lord. Even after death, his name was still being used to further nefarious ends. Palps used his death to stoke fear among the Republic.

If there's one thing Palpatine knew, it's to keep his friends close, and his enemies closer. It's unfortunate that an innocent Jedi had to die for this knowledge.