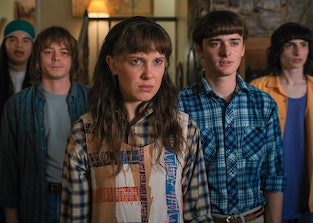 Netflix May 2022: 9 mind-blowing sci-fi shows and movies you can't miss

There’s nothing like Netflix in the summer. Things are finally heating up to the blockbuster level this May, with the return of big-budget classic movies and ambitious new shows. From Stranger Things to Ninja Turtles, there is plenty to keep you entertained all month long. Here are nine sci-fi movies and TV shows you can’t miss in May 2022.

Sci-fi and fantasy movies coming to Netflix in May 2022

9. War of the Worlds

H.G. Wells’ classic novel gets the Hollywood treatment in the most Hollywood way possible — high octane action, impressive special effects for 2005, and a career-defining starring role for Tom Cruise. They simply don’t make them like this anymore, but they don’t need to when you can just cue up this.

War of the Worlds will be available to stream on May 1.

Sylvester Stallone’s Rambo series is iconic, yet it is only the second most famous franchise starring the actor. The wartime action-thriller franchise returns in the fourth movie, following Rambo years after we last saw him when another mission drags him back into combat after living a quiet life in Thailand. Co-written and directed by Stallone, you’re guaranteed a rip-roaring time.

Rambo is available to stream May 1.

Tim Burton’s trademark gothic sensibility and love for the macabre are turned up to 11 in Corpse Bride, a stop-motion musical following a man entangled in a marriage to a dead woman. There are songs, lots of creepiness, and a visit to the land of the dead. It’s got Tim Burton written all over it in the best way.

Corpse Bride is available to stream May 1.

Lupin’s Omar Sy stars in this French action/thriller/comedy that’s looking to do the impossible — bring back the buddy cop comedy in 2022. Hopefully, with Netflix’s dedication to international media, Sy’s star power, and a hefty dose of conspiracy, this movie will be up to the task. If you’re not intimidated by subtitles, then this is sure to be a winner regardless.

The Takedown is available May 6.

Sci-fi TV shows coming to Netflix in May 2022

Did you know Nickelodeon revived the Ninja Turtles? Not only do Mikey, Leo, Raph, and Donny have a new look, but they also have an all-star voice cast boasting the likes of Ben Schwartz, Omar Benson Miller, and Brandon Mychal Smith. Now’s the perfect time to catch up on this slick animated series before Netflix releases a spin-off movie in August.

Rise of the Teenage Mutant Ninja Turtles Season 1 is available to stream May 31.

It may be years since we’ve caught up with the Hawkins gang, but in the topsy-turvy world of Stranger Things, it’s only been six months. Season 4 of the hit series (the second-to-last) is releasing over two parts: Volume 1 arrives over Memorial Day weekend, and Volume 2 comes just in time for the Fourth of July. So during your three-day weekends, you can catch up with Eleven and her friends as they face a new threat that could take over the Earth.

Stranger Things Season 4 Vol. 1 is available to stream May 27.

Ghost in the Shell: SAC_2045 is a computer animated spinoff to the classic anime Ghost in the Shell, returning for a second season (and a movie) this month. Netflix’s anime selection is often overlooked, but it’s an entire world of ground-breaking animation and rich storytelling waiting to be discovered.

Have you ever wondered what Mike Myers has been up to? Well, wonder no more: he’s made an Illuminati-esque comedy thriller starring himself in countless roles, which is basically what you would expect from him. There is plenty of jokes, lots of action, and of course, a bunch of cameos of people who aren’t Mike Myers.

The Pentaverate is available to stream on May 5.

Love, Death & Robots is the hidden envelope-pushing gem of Netflix’s TV offerings. Its second season was split into two parts, and this “Season 3” is actually the second part of the previous season. It includes new stories, continuations, and sequels in the series’ trademark animation style. Cue this one up to have your own short film festival at home.

Love, Death & Robots Season 3 is available to stream May 20.