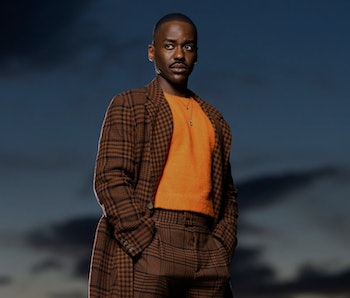 The next Doctor is keeping things simple. When Ncuti Gatwa becomes the incumbent eponymous Doctor Who hero sometime in 2023, we now know what he’ll be wearing. The fashion of the Doctor is a big part of the show’s nearly six-decade-long history, and it looks like Gatwa’s 15th Doctor will be dressed simply, but with a classic Who flare.

On December 17, 2022, the official social media channels of Doctor Who unveiled the initial costumes for both the new Doctor (Ncuti Gatwa) and the new companion, Ruby Sunday (Millie Gibson). The big news here is that we actually know what the new Doctor will be wearing in his first regular season.

The new doctor will wear a lightweight tartan checkered coat with a simple orange top, checked pants, rings, and a necklace. In one Instagram post, Gatwa says he will rock “Gallifreyan nail tattoos,” which will be a first for the character.

The BBC also featured the initial look for Ruby Sunday, who will be sporting a jean jacket, shorts, and boots, all of which are reminiscent of Rose Tyler (Billie Piper) from Seasons 1 and 2, but also similar to the first outfit worn by Bill Potts (Pearl Mackie) in Season 10.

At first glance, Ncuti Gatwa’s new Who look might seem minimalist and fashion-forward, which it totally is! But here’s a quick rundown of all the ways th e incoming Doctor’s look references previous Doctors.

In “The Power of the Doctor,” Jodie Whittaker’s 13th Doctor regenerated into David Tennant — who was previously the 10th Doctor. However, this new Tennant-Doctor is not simply a new version of “Ten.” Instead, all press materials are calling this Doctor “the 14th Doctor.” This makes a modicum of sense since Tennant’s Doctor has not reverted to having different memories, or experiences, but rather, has taken on a similar appearance to one of their previous incarnations.

So yes, Tennant is not reprising his role as the 10th Doctor, but rather will play the 14th Doctor for three specials in 2023, and then, at some point, somehow, regenerate into Ncuti Gatwa, who will be the 15th Doctor.

The new Doctor Who special will air on Disney+ in late 2023. Ncuti Gatwa and Millie Gibson will star in Season 14 of Doctor Who in 2024. Doctor Who is currently streaming on HBO Max.