“Sadly, it only exists in legends.” 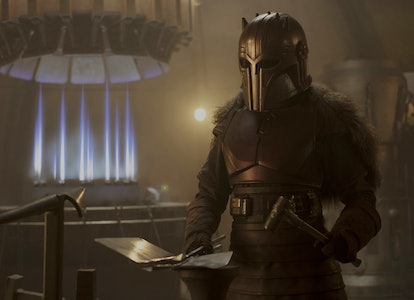 Star Wars Legends has almost been forgotten. As the Star Wars canon expands, the non-canon continuity has become less and less important to the ins and outs of the narrative. However, certain elements still sneak in. General Thrawn, for example, originated in Legends but was canonized through Rebels.

Even in The Book of Boba Fett, the story of how Boba survived the Sarlacc is ripped straight from Boba’s canonical adventures. But Boba’s spinoff took the sly Legends allusions to a new level in Episode 5, when The Armorer referenced a prophecy involving a mythosaur which she dismissed as mere “legends.”

But could we actually see a mythosaur in the future? The foundation is already in place. Here’s how it could work.

Boba Fett’s reference to Legends is clever, because while the revered prophecy is apparently eons old, the oral history of it doesn’t necessarily have to be completely correct. According to The Armorer, legend foretold that a Mythosaur rising up would herald the age of a new Mandalore. What if the prophecy was correct, but just named the wrong creature?

The mythosaur is a Legends creature said to be extinct, but originally these dragon-like creatures inhabited Mandalore until it was colonized by the people who would become known as Mandalorians. Considering the fate of Mandalore, it’s unlikely we’ll see a mythosaur in the near future of Star Wars TV, but there may still be a way for this prophecy to come true.

What if the prophecy just meant any fearsome creature, like a rancor? Boba Fett has said he wants to tame and even ride the creature the Hutt twins offered him as a tribute, and Danny Trejo’s Rancor Keeper seemed confident in his abilities.

With Mando now helping Boba Fett by providing “muscle,” he could find this favor returned tenfold. If he wields the Darksaber alongside another Mandalorian riding a rancor, that may be enough to fulfill the prophecy and herald a new age of Mandalore.

The Armorer mentioning a mythosaur stuck out. Why would she mention it unless it would come into play later in the series, and how could it come into play if the mythosaur is possibly mythological and definitely extinct, even in Legends? Substituting a rancor for a mythosaur could solve both these problems at once, and give Boba Fett an epic “Mother of Dragons” moment.