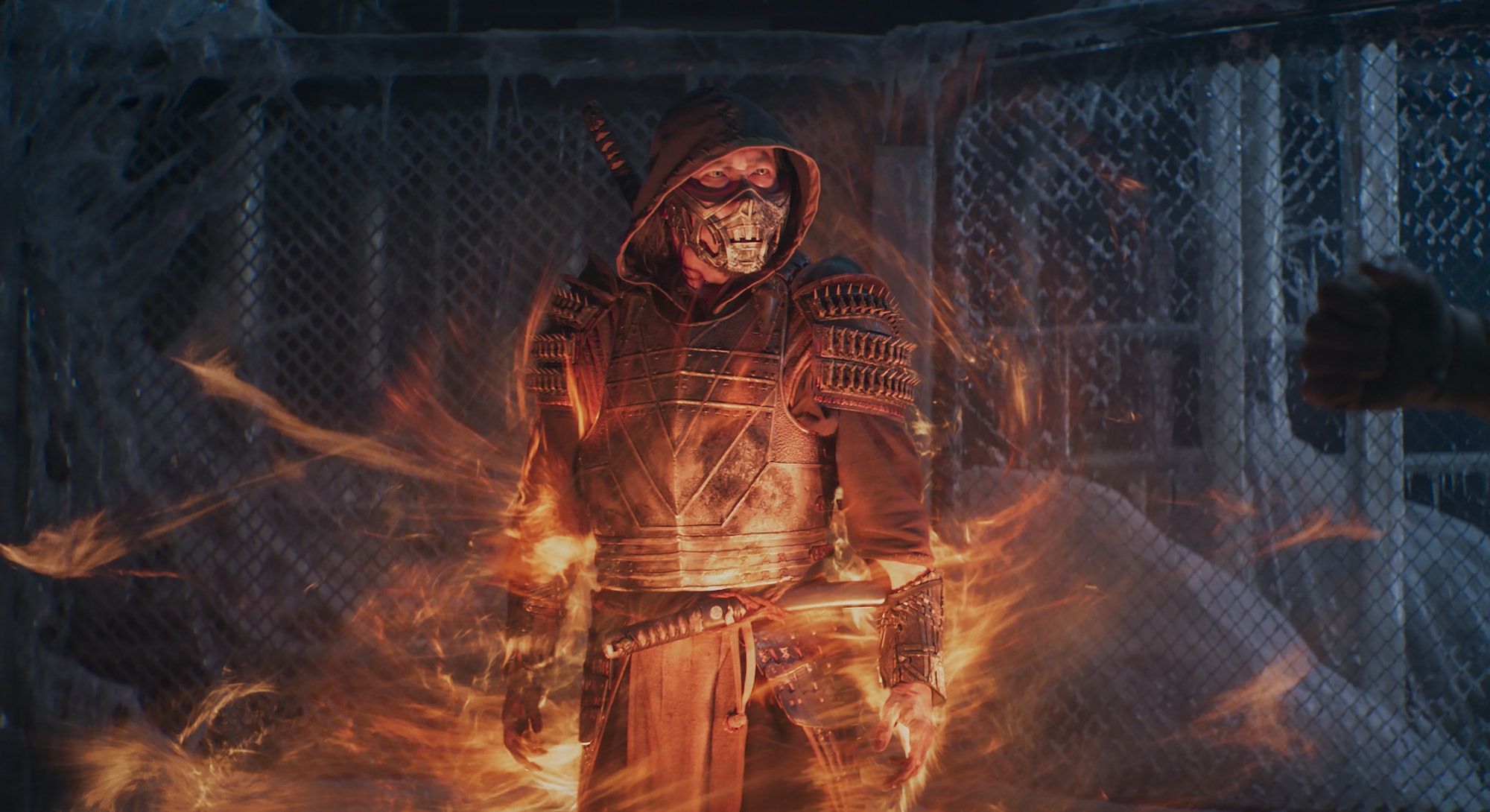 In the deadly universe of Mortal Kombat, warriors from across the multiverse smash, slice, and slay one another in a bid to secure freedom from invasion by the evil Shao Kahn.

But for screenwriter Greg Russo, Mortal Kombat was a safe haven from the real world.

“My most precious memories are playing in the arcades,” Russo tells Inverse.

“I was a child of divorce, so my house was sometimes not the best place to be. I would go to the arcades after school. That became our safe place to geeks like me, to stand around and play Mortal Kombat II.”

It is many years since Russo spent his upbringing in Cherry Hill, New Jersey mastering Kitana’s combos — “It was fan lift to jump kick to fan throw,” he recalls. Now, the 40-year-old screenwriter lives in Los Angeles. In his biggest movie yet, he pays homage to his own childhood in the form of the R-rated reboot Mortal Kombat, out in theaters and streaming on HBO Max. A change of pace from the video games, the new movie follows MMA fighter Cole Young (Lewis Tan), who discovers his birthright to fight in an ancient martial-arts tournament.

Russo started working on the Mortal Kombat reboot in 2016. He took over from the film’s previous writer, and Russo course-corrected an initial script that diverted too far from canon.

“Growing up with emotional passion to the game, it put even more pressure on me,” Russo says. “I wanted to make sure I brought my love to the finished product.”

In an interview with Inverse, Russo unpacks the new Mortal Kombat, the evolution of video-game movies, and his affection for the original games. He also defends the movie’s most controversial aspects — including the decision to bench Hollywood star Johnny Cage.

INVERSE: What is your earliest memory of Mortal Kombat?

GREG RUSSO: My first memory is when I was a kid in Target with my mom, duping her into buying it on the Sega Genesis. Because Mortal Kombat was the game that created the ESRB [an agency that assigns age ratings to video games], you couldn’t get your hands on that. It was hard with the new ratings. So, I duped my mom.

INVERSE: Who was your main?

GREG RUSSO: Kitana was my main in MK II. I was unbeatable. I had Kitana’s head decapitation down pat. Back in the ’90s when you played in the arcades, you had to “finish” them. You had to end a match with a fatality. If you didn’t, you didn’t know your stuff.

INVERSE: We’ve heard that the new character, Cole Young, is the audience filter to introduce Mortal Kombat to general audiences. Was there ever a concern that existing fans would be irate a new character has central focus?

GREG RUSSO: I thought about it the whole way. You have to understand, when I came into the project, it was already an idea. It was less about, “Are we going to do it or not?” and more about, “How can I do it in the best way to make it work in Mortal Kombat?” To solve that, it didn’t start with Cole at all. It started with Scorpion and Sub-Zero. When I got the script, it didn’t feel like Mortal Kombat. The characters weren’t doing what they do, good guys were fighting for the bad guys, there was no Scorpion in the movie.

INVERSE: Wait, there was no Scorpion?

GREG RUSSO: Not in any script prior to me. I felt [he] needed to be there. One of my mission statements was, as much as I loved the ’95 movie — I went opening night — Scorpion and Sub-Zero get a disservice. They don’t speak. So I wanted to do it right, do it justice.

One of the most emotional parts of the lore, I argue, is Scorpion’s backstory. I make sure we started and end there. We didn’t get it in the ’90s, and [it was] something I wanted to build the emotional stakes around. When you’re a screenwriter, you’re always asking, “Where can I get emotion?” Scorpion’s backstory was where I knew I could get some.

Once I knew that it became a matter of figuring out Cole in an organic way. With the fans, if they see the goodwill we’re doing, they’ll give us a chance and let us add something new. But fans get the Scorpion and Sub-Zero battle they wanted and never got. Really it’s about those two. If you’re a fan of those characters, there’s no way you walk out of this movie not satisfied.

INVERSE: One of the best gags in the movie is a reference to players spamming the sweeping leg kick. Where did that joke come from?

Greg Russo: I have to give credit, it was the president of New Line who came up with the joke and pitched it to us. We were like, “Oh, that’s great.” That’s a fun Easter egg for the fans who played in the arcade, especially newbies who didn’t know the leg sweep. The trick with the bit was making sure it worked, that it didn’t come across too wink-wink and felt natural to the story.

I wrote the line, “Is that the only move you know?” which is the callback to the arcade. It’s what I would say before I destroy them. [Kano actor] Josh [Lawson] is a great improviser and added his own touch. The actors played off each other, they embody those characters so well.

INVERSE: The biggest innovation in the movie is “arcana,” which is the reason for all the superpowers like Liu Kang’s fireballs and Kano’s laser eye. Where did that come from?

GREG RUSSO: The idea did predate me. But when you’re doing an adaptation, especially when you’re talking superpowers, you want to organically introduce them. To me, the worst would be everyone throwing fireballs [from the start]. How do these normal people have crazy abilities? I felt we had to put a reason in the story. If you look at any superhero movie, they’re defined by how they happen. An origin. We’re introducing 12 characters in Avengers mode, we didn’t have time to do 12 origin stories. So we had to create a unified origin. The idea of “unlocking” your ability.

INVERSE: Many fans are disappointed Johnny Cage is not in the movie, which makes the Cole Young question bigger. Why wasn’t Johnny Cage the focus of the movie?

GREG RUSSO: [The omission of] Johnny Cage was decided before I came. At first, I asked why. When I started getting into it, it made a lot of sense.

The reason Cage is not in the movie has nothing to do with Cole. It has to do with Kano. When I was designing the story, I didn’t want the traditional “three heroes save the day,” because you have three people with the same perspective. I love conflict. I love Kano because he’s an asshole and a self-serving prick. That creates conflict. Once everybody knew Kano would be part of [the story], his personality became really big. Really egotistical. That’s Johnny Cage, too. I played with Johnny and Kano in scenes together, and it was too much. It was two identical personalities and it took away from everyone else.

As much as everyone loves [Johnny Cage], it didn’t make sense for that story. So we made sure to tease fans for the end. If we make more movies, we leave ourselves some big characters. My favorite character, Kitana, isn’t in the movie because it doesn’t fit the story. That goes to show how hard it is to make those decisions.

GREG RUSSO: The reason video game movies are getting better is [filmmakers] who grew up on them are in a position to create. When we grew up in the ’90s and 2000s, the people that grew up playing games were not the people making [movies]. That’s why we were getting adaptations that weren’t made from fans — because they weren’t. I know people that worked on Sonic who are fans, they know the source material.

The more screenwriter-y answer is it’s a balancing act. If I were to write Mortal Kombat 12, I would write three hours of fan service. When I write a film, I find a balance between what the fans love and understand there are people who don’t know Mortal Kombat. You don’t want to exclude them. The fan and non-fan should have a great time.

INVERSE: Your next movie is Space Invaders. How is that coming along?

GREG RUSSO: Space Invaders is something I’m really passionate about. I didn’t want to do Independence Day. I didn’t want to do an invasion movie you’ve seen a hundred times. I found a different, emotional way into the invasion film that has a lot of heart. I’m excited, it’s at Warner and New Line, it’s the same structure that brought Mortal Kombat to life. I hope we find life for it, whether that’s HBO Max or somewhere. It’s a great title. My first console was the Atari 2600, and the first game I ever played was Space Invaders. That’s how old I am.

INVERSE: What made Mortal Kombat special in the ’90s and what makes it special now?

GREG RUSSO: It’s transcended its initial design. It got beyond just a game, it became a pop-culture staple. Part of it was the games were ahead of their time. It had an identity. Even in the fighting game market, which was saturated by clones, it had personality.

The movies helped. I don’t know that they get enough credit. In 1995, what does a movie do for a game? They let people come into that world. The ‘95 film had a huge role in Mortal Kombat becoming a cultural thing. It was number one at the box office three weeks in a row, the soundtrack was a top ten hit, everyone was dressing up for Halloween. It transcended what it was.

We’re in that sweet spot for the ’80s and ’90s kids where the stuff we grew up on, we pass it down. I have a four-year-old. The next generation looks at the stuff we loved. That’s how a thing continues.

INVERSE: Have you shown your kid Mortal Kombat?

GREG RUSSO: I have not shown my four-year-old Mortal Kombat. But he watched the PG-13 trailer and now he’s running around with a plastic katana saying he’s Scorpion. If you’re a parent, use your discretion.