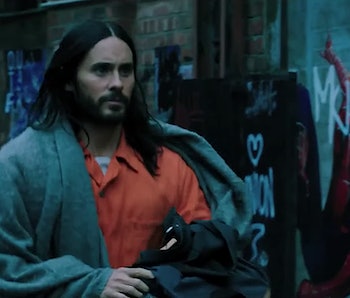 The Morbius trailer came virtually out of nowhere last month, causing the movie to become one of the most talked-about and eagerly anticipated superhero films of the year virtually overnight. The trailer confirmed the film’s connection to the Marvel Cinematic Universe, with Michael Keaton showing up in the final seconds as Adrian Toomes, aka the Vulture from Spider-Man: Homecoming. Ever since, Marvel fans have been puzzling over which other characters will appear in the movie, and a recent leak suggests that Jared Leto may not be the only vampire.

Possible spoilers for Morbius below.

When the Morbius trailer dropped, many fans guessed that Jared Harris (who you'll recognize from Mad Men, The Terror, The Expanse and Chernobyl) would play popular Spider-Man villain Doctor Octopus. That’s not much of a stretch, considering the connections the Morbius trailer has already established to the Marvel Cinematic Universe’s Spider-Man movies.

In the trailer, Harris’ character briefly speaks with Morbius. “You have a gift,” Harris says. “You always have.” On the surface, his character seems like a friend, right? Then again, Doc Ock also posed as Peter Parker’s friend before turning on him. When Variety asked if he would be playing Doc Ock, Harris shot down the rumors:

Okay, so who is he playing? According to Charles Murphy of the fansite Murphy's Multiverse — which accurately leaked all the Phase Four release dates before Marvel's official announcement — Harris and Doctor Who's Matt Smith are playing vampires Emil Nikos and Loxias Crown. Murphy posted the information on Twitter last week, but it got lost in the Doc Ock hype.

Turns out, the reason Harris seems like a friend to Morbius is because the two are best friends in the comics. After Morbius attempts to cure himself, he accidentally morphs into a vampire with a sudden lust for blood. His first victim? Emil Nikos. However, it’s not Morbius who turns his friend into a living vampire. Rather, it’s the villainous Baron Blood who transforms Emil after Morbius leaves him for dead.

While Emil’s turn into a vampire was a case of unfortunate circumstances, Loxias Crown is already a villain of sorts before crossing paths with Morbius. In the comics, Loxias is a Hydra agent hellbent on experimentation. He shows up in New York City with the intent of killing scientist William Fields for his research.

Crown eventually kidnaps Morbius, who turns Crown into a vampire before his experiments can go any further. Even after becoming a living vampire, though, Crown continues abducting people, creating his own army of vampires. Both Emil and Crown are gifted with the same powers and superhuman strength as Morbius and, as living vampires, are not restricted by traditional vampire strengths and weaknesses. (This means the likelihood that any of the characters will be defeated by garlic is slim to none.)

Matt Smith also appears in the Morbius trailer, though he’s seen very briefly while walking inside the subway station tunnels and doesn’t speak. It's hard to discern much about his character at this point, but it’s possible that he also starts off as a human like Emil. After all, both Emil and Loxias become vampires after Morbius changes, so it’s a safe bet they don't transform until later on in the film. Considering how little the actors are seen in the trailer, it’s possible that Sony wanted to keep their roles a mystery. Whoops!