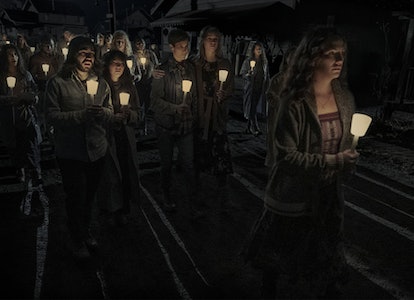 Put on your Sunday best because Midnight Mass is about to premiere on Netflix. The new horror series from Michael Flanagan — the mind behind The Haunting of Hill House and Bly Manor — is his most personal and intense work yet.

Starring Zach Gilford, Hamish Linklater, and Rahul Kohli, Midnight Mass is centered around a Catholic small-town community, where strange things begin to happen when a new priest comes into town.

Before its premiere, here is everything you need to know about Midnight Mass, from its release date and time to a guide of all its episodes. And don’t worry, this is all spoiler-free.

When is the Midnight Mass release date?

Midnight Mass will be released on Friday, September 24, 2021. All episodes of the limited series will be available to watch on that date.

When is the Midnight Mass release time?

Like most Netflix releases, Midnight Mass will likely release at 3 a.m. Eastern on Friday, September 24. Depending on your time zone, it might or might not be worth staying up to be the first to watch the new horror series.

Netflix typically releases its new shows and movies at 3 a.m. Eastern to make sure they debut on the actual release date on the west coast, where it will be 12 a.m. Pacific time.

Is there a Midnight Mass trailer?

Yes, there is. You can watch the Midnight Mass trailer below.

Is there a Midnight Mass season 2?

Right now, Netflix calls Midnight Mass a “limited series,” meaning that there are likely no plans for another season.

However, if Midnight Mass is a massive success and creator Mike Flanagan has more ideas for this series, Netflix could change their minds and greenlight a second season.

How many episodes is Midnight Mass?

There are seven episodes total, each one is fittingly named after a book in the Bible.

What are the Midnight Mass episode titles?

Here are all seven Midnight Mass episode titles, in order:

Now read: Our spoiler-free review of Midnight Mass breaks down the themes at play in Michael Flanagan’s new horror series.

More like this
Culture
6.27.2022 5:58 PM
6 amazing sci-fi shows and movies coming to Netflix in July 2022
By Robin Bea
Entertainment
6.30.2022 3:25 PM
Netflix may have deliberately spoiled a huge Stranger Things death
By Dais Johnston
Culture
16 hours ago
Here's everyone who lived and died in the Stranger Things Season 4 finale
By Mónica Marie Zorrilla
Related Tags
Share: