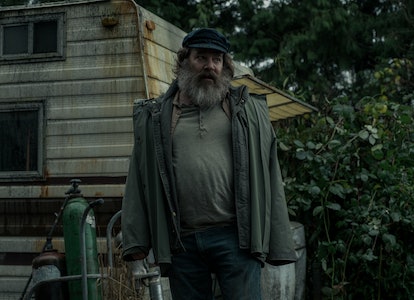 Of the many heart-wrenching scenes in Midnight Mass, few land with the same brute force as Leeza confronting Joe Collie in his trailer.

It’s a charged and volatile confrontation, where Leeza (Annarah Cymone), a teenage girl, unloads all the hate and resentment she’s held towards the man who paralyzed her prior to the show’s events. During her impassioned monologue, Joe (Robert Longstreet) is left speechless by her strength and bravery — and waits for her to do what he thinks she should: Repay the favor. Instead, she forgives him.

Scene Stealers is a countdown that salutes the unforgettable small-screen characters of the year. Joe Collie is #30.

Some spoilers for Midnight Mass ahead.

To watch their meeting, which runs a little over five minutes long, is to watch a tortured man face what he’s long dreaded, only to receive the forgiveness he feels he doesn’t deserve. Joe Collie curls in on himself, sobbing and hyperventilating before the girl whose life he’d ruined. It’s a stunning, emotionally shattering scene; one of those TV moments you’ll never forget.

Midnight Mass isn’t the first time actor Robert Longstreet has plumbed the dark depths of the human soul for horror auteur Mike Flanagan. The performer has maintained a steady career since the mid-1990s and has turned in strong work in films like The Week That Girl Died, Great World of Sound, and Take Shelter.

He also gave a particularly memorable performance in 2018 as Mr. Dudley in Mike Flanagan’s masterful Netflix series, The Haunting of Hill House. But Longstreet’s work as Joe Collie in Flanagan’s most recent production is easily his best yet.

Who is Joe Collie?

Longstreet’s Mr. Dudley is a reserved caretaker haunted by painful secrets. By contrast, Joe Collie is an openly wounded man whose longtime coping mechanisms for his shame involve a lot of drinking and yelling. Whether he’s getting himself so wasted at night that he wakes up in a jail cell the next morning or screaming at the sky when his dog is poisoned, Joe’s drunkenness and rage are always visible — right up until the moment Leeza pays her visit to his trailer.

In his roles on Flanagan’s shows, Longstreet has proven himself capable of inhabiting characters with deep scars, and Joe’s are perhaps the deepest. Critical to this talent is his ability to encourage empathy for Joe’s self-loathing, even when you know what he did was entirely his fault. When Leeza comes to Joe, Longstreet hunches his shoulders and tucks his chin, physically compromising between his fear of facing her and respecting her with eye contact.

Combined with his ragged sobs and stuttered breaths, Joe’s whole body language instills in you the same fear and anxiety Joe feels when Leeza walks into his cluttered, messy trailer — its chaotic state of disrepair is a reflection of Joe’s own, disorganized emotional state. Joe’s palpable vulnerability and breakdown pay off later in his efforts to get sober. We’ve seen him at rock bottom, and we want him to climb back up from the fall.

Introduced as a mean drunk, Midnight Mass efficiently deconstructs Joe’s tough exterior to reveal the gaping wounds he tries to hide. It’s a raw, unflinching portrait of a flawed man — the likes of which Flanagan and Longstreet are exceedingly good at exploring on-screen. He’s the kind of character who deserves a show built around him because of his growth, so here’s to hoping that one of Flanagan and Longstreet’s future collaborations ends up giving us another character worthy of just that.

“A raw, unflinching portrait of a flawed man”

Ultimately, Joe Collie’s recovery is cut short through no fault of his own. He is the first person on damned Crockett Island to pay the price for a strange new priest’s grand, misguided plans. Joe’s end in Midnight Mass is poetic, unexpected, and tragic.

But for a few beautiful moments, Joe finds faith in himself again. Regardless of what ultimately becomes of him, the fact that Joe even begins a journey towards sobriety is proof of not only what can happen when you are forgiven by someone else, but when you decide to try to forgive yourself — no matter the mistakes you’ve made. His story proves that anyone can put themselves back on a path towards recovery.

Through Joe Collie, we learn to look to those who can help us stay upright when our legs buckle down. His demise, alternatively, warns us to be careful about who we’re keen to put our trust in. That’s a lesson in Midnight Mass that is well worth remembering in times like these, when deceptive leaders have more access to lost souls than they ever have before.