A Long Time Ago 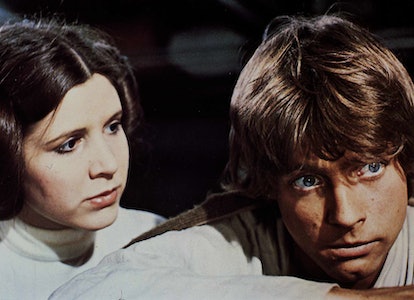 Celebrating “Star Wars Day” on May the Fourth is the result of a somewhat obvious pun taken way too far.

Although the true birthday of Star Wars is debatable — it came out May 25, 1977, but the first novelization was released into the world on November 12, 1976 — we’ve all settled on May the Fourth because it sounds like “may the Force be with you.”

While the roots of the actual holiday have some humble, grassroots fandom origins, the actual phrase’s beginnings are stranger than you might think. George Lucas eventually did settle on “may the Force be with you” as the “live long and prosper” of the galaxy far, far away, but it wasn’t always going to be this exact phrase — and some of the early alternatives might shock you.

“May the Ashla be with you”

According to numerous sources, but most notably, Star Wars: The Annotated Screenplays, in George Lucas’ second draft for Star Wars, he defined The Force of Others as “an energy field...that influenced the destiny of all living creatures.” This Force was split into two para-forces called “the Ashla” and “the Bogan.”

At this point, the Jedi were called “The Jedi Bendu of the Ashla,” who fought against people who were down with the Bogan. Later, these concepts would become “the Light Side” and “the Dark Side.” However, the idea of the Ashla and the Bogan were eventually made canon in Star Wars Rebels, when mysterious Force-creature called “the Bendu” (voiced by Doctor Who legend Tom Baker) referred to the Dark and Light Sides as “Ashla” and “Bogan.” From the point of view of the Bendu (who lived in “the middle”), these extremes were kind of silly.

Overall, it’s nifty that the terms “Bendu,” “Bogan,” and “Ashla” were all reappropriated to be made canon eventually, but it's hard to imagine taking the original 1977 film seriously if Obi-Wan was trying to teach Luke the ways of the Ashla.

“May the Force of others be with you”

This one is a mouthful.

As any good Star Wars aficionado knows, George Lucas mixed a variety of different religious, mythological, and philosophical concepts to give the faraway galaxy its spiritual context. Speaking to Lauret Bouzereua for The Annotated Screenplays, Lucas said: “I basically worked out a general theory for the Force, then I played with it. The more detail I went into, the more it detracted from the concept I was trying to put forward... it worked better as I got less specific... So the real essence was to try to deal with the Force but not be too specific about it.”

Obviously, Lucas didn’t really take his own advice on that one, since The Phantom Menace leaned heavily into trying to explain the Force, a narrative burden the sequel films were subsequently saddled with, too. In Lucas’ earliest drafts, it looks like people were saying “May the Force of Others Be With You.” This was intended as a nod to the Christian blessing, “May the Lord be with you and with your spirit.”

“May the Force field be with you”

Okay, so there’s not an early script anywhere in which someone says “may the Force field be with you,” but in some early drafts Obi-Wan uses the phrase “Force field” instead of just “Force.” Again, from the Annotated Screenplays, here’s an example:

“It is nothing, yet it makes marvels appear before your very eyes. All living things generate this Force field.”

In early drafts, the Force (or Force field or Force of Others) was also heavily reliant on magical crystals for amplification. Obi-Wan also tells Luke in early drafts that “Force can be collected and amplified” through the use of a “Kiber Crystal.” In the current canon, the Kyber Crystals are at the heart of a lightsaber. But in the earliest ideas of Lucas’ magical system for Star Wars, you had to have a bunch of special crystals to really make all of this work.

Once the Force was liberated from some of these dusty fantasy and sci-fi tropes, it inherently became more egalitarian. If George Lucas had kept Star Wars mired in overtly religious language or well-worn sword and sorcery nomenclature, there’s a very real chance Star Wars would have failed.

Despite some massive affectations in various geek communities, the success of Star Wars is partly connected to the idea that it was instantly popular. As a fantasy film (or a science fiction film) it leaped over hurdles that previous films or TV series couldn’t quite surmount. The utterly mainstream success of Star Wars is, in part, connected with the way people talk, the language itself was approachable, and easy to understand, even if the ideas were somewhat complicated, or confusing.

So, the next time you say “may the Force be with you,” consider the elegance of the phrase. And also consider the amount of effort that went into crafting that phrase. The final product of the original 1977 Star Wars is a nearly flawless piece of cinematic art. But getting there took a lot of revision and rethinking. And interestingly, none of that triumphant success has anything to do with the movie itself. Turns out the words were what mattered the most.

Star Wars: The Annotated Screenplays are out of print, but you can grab a used copy here.