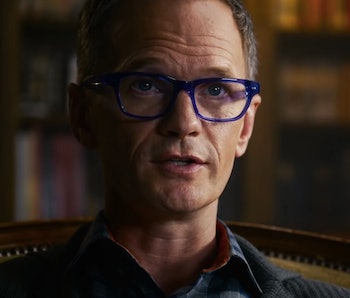 The first time we see Neil Patrick Harris in The Matrix Resurrections he’s a mild-mannered therapist helping Thomas Anderson (Keanu Reeves) distinguish between reality and illusion. But something is off. Who is NPH in Matrix 4? The answer isn’t as simple as you might think.

Warning! Spoilers ahead for the ending of The Matrix Resurrections.

The Analyst and the Architect

Neo’s Therapist has a black cat companion who gives Tom a sensation of déjà vu. He wears blue glasses matched with an elegant suit of the same color (a color that also matches the pills he prescribes to Mr. Anderson). But there’s more to it than that. Neil Patrick Harris’s arrogant demeanor in the face of the Chosen One brings one classic Matrix character to mind: The Architect.

Except, that’s not it either. Harris’ “Analyst” seems to care about the feelings of the human race. Or at least, he’s intrigued by them. By comparison, the Architect mocked Neo’s feelings towards Trinity in The Matrix Reloaded. But in Resurrections, this new character builds an entire simulation powered by their love. (Yeah, the plot of this movie is weird, but let’s not dwell on it too much).

In Reloaded, the Architect tells Neo that if is the Father of the Matrix, then the Oracle is its Mother. Later, in The Matrix Revolutions, the audience discovers that the liberation of the human race is little more than a chess game between the Oracle and the Architect. It turns out, the Oracle isn’t as wholesome as we thought, seemingly creating the Agent Smith virus as part of her master plan.

The Analyst and the Oracle

In The Matrix Resurrections, the character played by Neil Patrick Harris is revealed to be some kind of upgrade from the original Architect now called the Analyst. But could it be that this new program is some kind of merging of mother and father programs?

This theory only grows stronger when we learn that Jonathan Groff’s character is a new version of Agent Smith. Groff appears at the “Simulatte” café where the movie’s final showdown takes place to deliver a deadly blow to the Analyst. Is that a hint of vengeance we see on Smith’s face?

Agent Smith clearly unfinished business with the Oracle. In Revolutions, Smith calls her his “mother” before transforming her into yet another version of himself, though it’s later revealed that was all part of the Oracle’s risky endgame to end the battle between humans and machines. Is that why Groff’s character is so happy to shoot Neil Patrick Harris’ Analyst?

In the animated short The Second Renaissance (a prequel to the Matrix featured in The Animatrix) we witness two robots walking through the ruins of the late human world. Perhaps those were the Oracle and the Architect, a pair of computer programs in robot bodies surveying a new world they would build together. But once their simulated world failed, it was their artificial child who rose up to build an even crueler Matrix of his own.

The Matrix Resurrections is currently in theaters and on HBO Max.