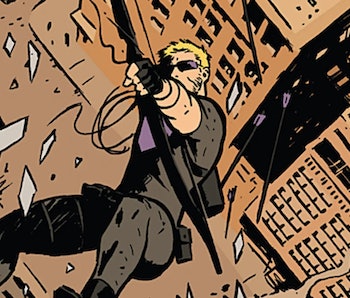 Casting calls can sometimes offer enticing clues about upcoming projects, like Wandavision's search for two infants and Stranger Things looking for band members. Most of the time, these announcements are engineered not to be too spoiler-y, but a recent casting call for Hawkeye on Disney+ may reveal a huge addition to the series that has fans seriously excited.

The Tracksuit Mafia, or, as Clint calls them, "the Tracksuit Draculas," are a Russian crime syndicate who served as the stereotypical landlord villain in the 2012 Hawkeye comics run, where one of their members, Ivan Banionis, is ordered to raise rent in the building where Clint Barton lives. Rather than see his neighbors get evicted, Clint fights against the crime of unfair housing policies by buying the building himself.

The most distinct trait of the Tracksuit Mafia is their repeated use of the word "bro." It's a glorious nugget of characterization, using such macho language as punctuation, and it quickly made them fan favorites, despite being extremely exploitative crime lords.

Hawkeye's encounters with the Mafia didn't stop there: eventually, they hired Polish assassin Kazimierz Kazimierczak, aka The Clown, to take out Clint in order to evict all the tenants in his building and instead build a mall. It's a move befitting a fat cat real estate villain in an 80s movie, albeit with a far deadlier scheme.

Could this mysterious casting call be for The Clown himself? It would be odd for the Disney+ show to include an Eastern European character without it being related to this storyline whatsoever, so that's probably the best bet. If it's not the Clown himself, it's probably safe to say there will at least be a nod to this comic's community of evil bros.

The Inverse Analysis — The Tracksuit's mafia inclusion in the upcoming Disney+ series would signal a more faithful adaptation to the 2012 comic than widely assumed. This popular run introduced audiences to a funnier, more grounded side of Clint. If the Disney+ show includesThe Clown, it could mean the series will pull generously from other aspects of this comic storyline, from Kate Bishop's role to Clint's disability.

More like this
Entertainment
5.9.2022 3:53 PM
'Moon Knight' star on becoming Scarlet Scarab and her dream Marvel team-up
By Aaron Pruner
Entertainment
5.4.2022 8:00 AM
Will there be a Moon Knight Season 2? This Marvel leak may have the answer
By Dais Johnston
Entertainment
5.2.2022 5:47 PM
Moon Knight finale runtime leak reveals a concerning detail
By Alex Welch
Related Tags
Share: