'Mandalorian' Season 3 could introduce a weapon to rival lightsabers 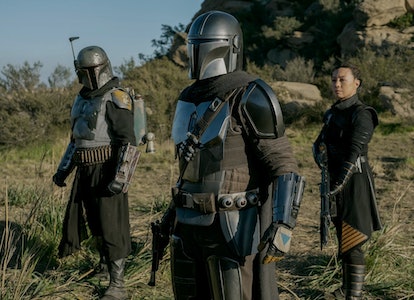 Star Wars is nothing without its iconic weapons. From the first time Luke activated his heirloom lightsaber to the millionth time a stormtrooper missed a target with a blaster, there’s a comfort to be found in knowing exactly what each character will wield in a fight.

The only real surprises in the galaxy far, far away involve what types of sabers and blasters are involved in a given skirmish.

However, that all changed in The Mandalorian, as neither the protagonist, Din Djarin, nor the antagonist, Moff Gideon, use the Force. Moff Gideon broke from tradition when he wielded the Darksaber, and Din employed all sorts of Batman-like gadgets like whistling birds and knee darts, as well as his trusty Beskar spear and ultimately the Darksaber.

But The Mandalorian Season 3 change everything we know about Star Wars weapons — and the hints that it plans to do so were hidden in plain sight in Season 2.

It’s hard to forget that iconic moment, in the final moments of The Mandalorian Season 2 premiere, when Boba Fett was revealed to be alive and on Tatooine. Perhaps less immediately memorable were the weapons he was carrying at the time.

Slung across his back was a cycler rifle, the traditional weapon of the Tusken Raiders. This led many fans to believe he spent the years since his fall into the Sarlacc pit among the Tuskens. But the inclusion of the cycler rifle also introduces a rarely-seen weapon: slugthrowers.

Slugthrowers are the Star Wars equivalent of normal guns. They shoot projectiles instead of lasers, distinguishing them from blasters. They’re usually shown in canon as primitive weapons like those used by the Tuskens, but in non-canon Legends stories, they have a more interesting history.

In Shatterpoint, a Legends novel following Mace Windu on a mission to rescue his padawan, the Jedi gets caught up in a recurring war between two factions on the planet Haruun Kal. On his quest, he meets Phloremirlla Tenk, a human woman who tells him about slugthrowers.

“Slugthrowers. I hate 'em. But they're easy to maintain. Day or two in the jungle and your blaster'll never fire again. A good slug rifle, keep 'em wiped and oiled, they last forever.”

Tenk’s comparison to blasters may seem hard to believe, but other examples in Legends suggest slugthrowers can not only rival blasters but also equal lightsabers when wielded correctly. According to the 1987 Star Wars Sourcebook, slugthrowers with a high rate of fire would simply overwhelm any enemy with a lightsaber. Plus, slugthrowers couldn’t have their ammunition deflected back — any slug that hits a lightsaber blade simply melts.

The slugthrower may not be as popular as the blaster, but this makes it more effective. As no armor (except Beskar) can deflect blaster fire, many soldiers stopped wearing any, finding it cumbersome. In this way, the introduction of the blaster made enemies more vulnerable to slugthrowers.

Now that Boba Fett has experience with a cycler rifle, he may start using slugthrowers in The Mandalorian Season 3 or The Book of Boba Fett alongside his trusty blaster. Now Din Djarin has the Darksaber, he’s not in need of a new weapon, but slugthrowers may just be the key to closing the power gap between blasters and sabers.

More like this
Entertainment
6.13.2022 10:30 AM
Star Wars is stuck in a Disney+ slump of its own design
By Jake Kleinman
Entertainment
6.20.2022 3:23 PM
Obi-Wan Kenobi Season 2 could ruin the show — and destroy Star Wars canon
By Dais Johnston
Innovation
6.17.2022 10:00 AM
How one company’s controversial cloning technique is changing Star Wars forever
By Ryan Britt
Related Tags
Share: