'Mandalorian' Season 3 could reveal the secret origins of Mandalore

“We call the shadow warriors our progenitors” 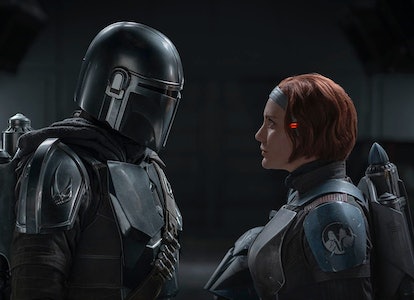 The Mandalorian Season 3 is bringing Din Djarin’s story back to its roots. Over two seasons of roaming the galaxy alongside his trusty sidekick Grogu, we’ve learned that Din is a Child of the Watch, a sect that follows an extremely strict interpretation of the Mandalorian creed. We’ve also learned that a great massacre known as the Night of a Thousand Tears cast all the remaining Mandalorians off the planet, leaving its fate uncertain.

But now that the Season 3 trailer has shown countless Mandalorians returning to their planet, we may get a Mandalorian history lesson that goes back thousands of years to the first Mandalorians. And if we do, they’ll look very different from the ones we see now.

Within the non-canon Legends continuity, Mandalore’s history is extensive, reaching all the way back to about 3000 years before the events of the Star Wars films. According to several sources, including the Complete Encyclopedia and the Essential Guide to Warfare, the first beings to call themselves Mandalorians were the Taung, a tall, humanoid race who looked more like Predators than Pedro Pascal.

The Taung evolved on Coruscant, but a war with the tribe of humans who also lived there forced them out. They eventually settled on Mandalore and developed a rich culture emphasizing honor and combat. War was considered a religious act, and we can see the legacy of this in the reverence Din Djarin has for his helmet and armor.

The Taung culture also developed the term Mand’alor, meaning “sole ruler,” in reference to the leader of all Mandalorians. Though this term has shifted in meaning over thousands of years, it still remains in Mandalorian society, with the wielder of the Darksaber being recognized as the Mand’alor. That means Mando is currently the Mand’alor despite his exile, the next in a long line going back millennia.

But why would the Taung factor into The Mandalorian? Well, in The Book of Boba Fett we caught up with Grogu at Jedi summer camp with Luke Skywalker, but when given the choice between life as a Jedi and life as a Mandalorian, Grogu chose the latter.

It was the Taung who introduced the concept that Mandalorian isn’t a race, but a way of life, meaning anyone could be adopted into Mandalorian culture. This is the same thought the Children of the Watch had when they adopted Din Djarin, but it’s not a popular belief. Bo-Katan Kryze, theorized to be a major antagonist in Season 3, believes the Darksaber and the title that comes with it is her birthright.

A flashback to the Taung era would establish that while one species started the Mandalorians, anyone is welcome to join, whether they be a member of “a zealous cult” (to quote Bo-Katan), or a little green guy with a penchant for eggs.