“Revenge is the wrong motive. But you know that.” 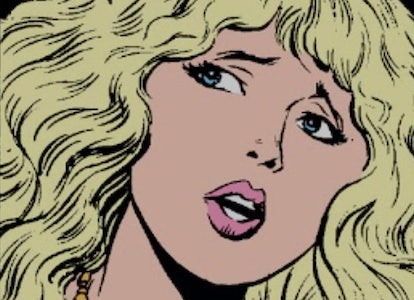 Luckily, one of the first Star Wars comics briefly introduces a love interest that could be the perfect inclusion in The Mandalorian Season 3 — and help to explain his decline in the sequel trilogy.

In Star Wars #89, published all the way back in 1984, Luke aids a Rebel uprising on the planet Solay. The lead freedom fighter is shot and killed, but Luke is consoled by the beautiful blond Mary, who assured him the best way to honor his memory is to keep going. Later, when the Empire-sympathizing government is overthrown, Luke wants to start working to rebuild a new, fairer government, but Mary convinces him to let the Solay people celebrate their victory.

All along, we see Luke's thoughts about Mary. He's falling for her, fast. He finally asks if they could talk alone, which is of course when the Empire invades to squash the uprising before it can get too far. Mary is caught in blaster fire, but Luke summons her injured body to him using the Force. Mary dies in his arms, but not before telling him she loves him and to think of what could have been.

Though this is a short-lived moment, it provides a much-needed reminder that Luke is more than just the hero of the Rebellion. He's also a young man thrust into a situation far bigger than himself. The one time he let his guard down and allowed romance to creep in, it had fatal results.

Including this in The Mandalorian Season 3 over his other non-canon love interests like Mara Jade would actually help the Star Wars canon as we know it by underlining why "attachments" are so discouraged in the Jedi order. Just as Ahsoka had issues with Grogu because she could sense the attachment with Mando and was reminded of Anakin, Luke could be reminded of Mary and know that attachment isn't just distracting, it's dangerous.

Mary isn't like most Star Wars characters. She and Luke fell in love at first sight, and what kind of a Star Wars name is Mary? But this outlier character, or someone inspired by her, could further add to the loss Luke has experienced and further explain why he goes into exile so many years later.

More like this
Entertainment
5.14.2022 10:31 AM
Obi-Wan Kenobi could bring back an iconic Star Wars character
By Dais Johnston
Entertainment
20 hours ago
Ahsoka will be different from The Mandalorian in one important way
By Alex Welch
Entertainment
5.16.2022 11:00 AM
20 years ago, the most underrated Star Wars movie changed canon forever
By Ryan Britt
Related Tags
Share: