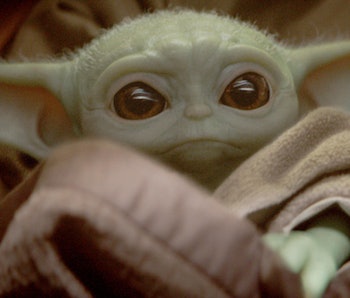 The adorable MacGuffin of The Mandalorian is the bug-eyed, big-eared creature only known in the show as "The Child." To fans, he's only known as "Baby Yoda." With The Mandalorian Season 2 coming soon, news is starting to leak, including the inclusion of Rosario Dawson as The Clone Wars protagonist Ahsoka Tano. This is fueling speculation as what parts of Ahsoka's story will add to Mando's, including what possibly could be the key to Baby Yoda's true identity.

One of the lesser-known bits of Star Wars canon is The World Between Worlds, a place existing outside of space and time, allowing for time travel. It was introduced in Dave Filoni's series Star Wars: Rebels, which Ahsoka also appeared in. Reddit user DarthP1agueis suggests this means Ahsoka, who knows about the time travel, can explain how Baby Yoda is stuck in a time loop, and put him back where he belongs, over 850 years ago, where he can live out the rest of his life as Yoda.

Time travel in Star Wars hasn't been explored too much: in Rebels, Force-sensitive Ezra Bridger enters the World Between Worlds and sees portals to other places in time. He uses this to assist Ahsoka Tano in her past fight with Darth Vader, and as they escape they see other points in time, even encountering Emperor Palpatine himself. Aside from that, it's never really been mentioned.

Last we left Baby Yoda and The Mandalorian, they were setting off to look for people to explain the Force powers The Child exhibits. If Ahsoka is included in this season, she'll probably fill that role. As a character we've seen since the events of the prequels, she'll tie Baby Yoda with the main canon, knowing exactly what she must do with the future Jedi Master. The thought of seeing the World Between Worlds in live-action is too tempting to resist, and knowing Baby Yoda is the Actual Yoda would be the perfect twist to raise the stakes for Season 2.

Behind the scenes, this makes sense as well. Dave Filoni, the showrunner for both The Clone Wars and Rebels, is a showrunner of The Mandalorian. He apparently had discussed the use of time travel with George Lucas himself, so the use wasn't merely meant for the Rebels series. If time travel is involved in the new season, it could change the events of the Star Wars universe forever. Or, like its inclusion in Rebels, it will be used to solve a problem and then be more or less forgotten.

The Mandalorian Season 2 will be released in October 2020 on Disney+.