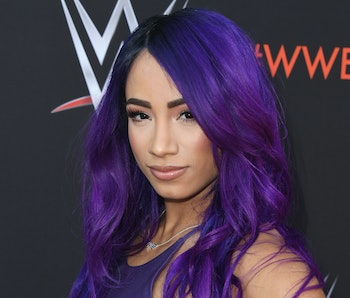 Filming is currently underway on The Mandalorian Season 2. The Disney+ series, which will forever be remembered for introducing the world to Baby Yoda, will reportedly add a WWE star to the cast in a guest role. The mysterious character might help expand upon Cara Dune’s backstory.

Cara was a former shock trooper who fought alongside the Rebel forces during the Galactic Civil War, and her job mostly involved cleaning up the mess left behind after the Empire's collapse following the Battle of Endor in Return of the Jedi. Cara's involvement in The Mandalorian Season 1 was primarily as a mercenary who helps protect Baby Yoda from harm alongside Pedro Pascal's mysterious Mando. However, Cara only appeared in a few episodes during Season 1, and there's still a lot we don't know about her.

Enter WWE superstar Sasha Banks, who has reportedly been cast in an undisclosed role in The Mandalorian Season 2. The wrestler’s involvement in the Disney+ series was first reported by the Mat Men Pro podcast (via Pro Wrestling Sheet). The source claims she’s already filmed her scenes for Season 2. The casting rumor has yet to be confirmed by Disney+ or the showrunners, and little is known about her character. That said, it seems likely she is someone from Cara's Dune’s past, perhaps a fellow former shock trooper.

In Season 1, Cara was hiding on Sorgan to elude the authorities, though we never learned why she was wanted to begin with. Banks’ character could offer clues to how Cara landed in hot water. Perhaps the mystery character knew Cara before she became a fugitive and mercenary. Conversely, it's also possible that Banks’ character will be hunting Cara down in Season 2 and that’s how she winds up working alongside the Mandalorian once more.

The last we saw of Cara, she had seemingly accepted Greef Karga’s offer to become an enforcer on the planet Nevarro. So it's also possible that Banks' character also works with Karga, and they meet for the first time in Season 2. After all, both Banks and Gina Carano are professional fighters, so the "enforcer" role wouldn't be much of a stretch: Banks appears on WWE’s SmackDown, while Carano is a former MMA fighter.

While there’s no telling how big of a role Banks might actually play in the Disney+ series, it’s a safe bet that she will share at least one scene with Carano.

The Mandalorian Season 2 premieres on Disney+ in October 2020.