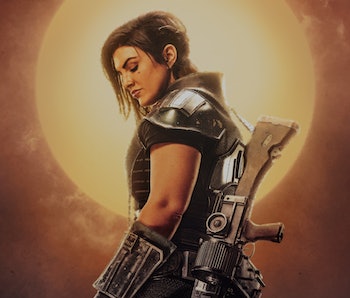 Most regular people in the Star Wars galaxy despise the Empire for obvious reasons. After all, Why would any good person like a fascist regime? The Mandalorian’s Season 1 finale included an Easter egg that confirmed why Rebel shock trooper Cara Dune hates the Empire more than Mando hates droids.

Her home planet is the only one to have been destroyed by the Imperial Death Star.

Spoilers for Mandalorian Episode 8 ahead.

Midway through “Chapter 8: Redemption,” Mando is pinned down inside the cantina with Cara and Greef Karga. Moff Gideon shouts through the big open window all the information he knows about the three of them. He knows that Mando’s real name is Din Djarin, that Greef is a “disgraced magistrate,” and he also says Cara’s full name as “Carasynthia Dune of Alderaan.”

That planet should sound familiar to even the most novice of Star Wars fans. Leia Organa is a princess in its royal family. It’s also the only planet that the Empire ever successfully destroyed. This happened during the events of A New Hope, and it’s one of the most crucial events in Star Wars history.

This gives Cara a better reason than most to hate the Empire, and it explains why she enlisted in the Mandalorian’s final mission of Season 1 without hesitation: because it meant killing “Imps.”

“Saw most of my action mopping up after Endor — mostly ex-Imperial Warlords,” she said in Chapter 4. “Then when the Imps were gone, the politics started. We were peacekeepers, protecting delegates, suppressing riots. Not what I signed up for.”

Because the Battle of Endor happened four years after the destruction of Alderaan (aka, 4 ABY), it seems likely Cara may have enlisted in the Rebellion just to avenge the destruction of her home planet. The Galactic Civil War didn’t end until the Battle of Jakku in 5 ABY, which means she must have seen most of her action between 4 ABY and 8 ABY. The Mandalorian happens in 9 ABY, and by this point, she’s hiding out on Sorgan.

All of this means Cara probably enlisted sometime during the original trilogy because of Alderaan’s destruction when she was relatively young. We don’t know exactly when she was born, but she’s a similar age to Luke and Leia. Her connection to Alderaan doesn’t mean in any way that she knew Leia personally, but it’s possible.

All Cara really cares about other than survival and keeping her skills sharp is taking down Imperials, all because of this lifelong grudge. Can you blame her? Most of her family, every place she knew, the home she grew up in, her entire planet. All of these things were obliterated by the Empire.

Cara survives the conflict against the former Imperial troops in the Season 1 finale and seemingly decided to stick around on Nevarro to join the Bounty Hunters’ Guild and work with Greef Karga. It seems all but certain that we’ll see her again in Season 2, and there’s no doubt that she’ll continue to hunt down Imps in whatever capacity she can.

The Mandalorian Season 2 has no confirmed release date yet, but fall 2020 seems possible.