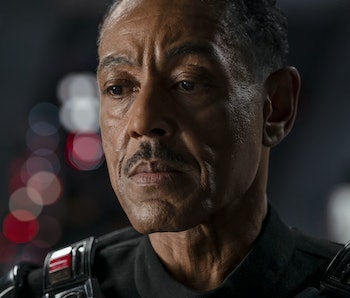 Moff Gideon may or may not be Force-sensitive, but either way, he's a terrifying villain for The Mandalorian. With a mind for tactics, a stunning mustache, and the infamous Darksaber, he's got everything he needs to track down a rogue bounty hunter and his adorable ward. However, Star Wars fans know next to nothing about how he'll go about finding them and taking Baby Yoda for his own. This compelling fan theory looks all the way back to biblical times for a clue.

Redditor TheMediocreCritic looked to Moff Gideon's name inspiration for a clue as to what Moff Gideon's future holds. Gideon's story was included in the Book of Judges in the Hebrew Bible, and chronicles a man with no military experience who leads an Israelite troop of 300 men to victory in battle against a Midianite army despite being wildly outnumbered.

Gideon was visited by an angel who gave him his assignment, but Gideon was not convinced. He asked for three signs. Firstly, the angel made fire shoot from a rock. Secondly, he laid out a piece lamb's wool overnight and in the morning, the wool was wet but the ground was dry. The last test was similar, but in the morning, the ground was wet but the wool was dry.

It took a while, but Gideon was convinced. He gathered troops, but God told Gideon the number was too many for the victory to be miraculous and stoke faith in God. First, Gideon sent home all those who were afraid. Then, he took those who remained for a drink. God told him to send home all those who got on their knees to drink instead of lapping the water directly from their hands, leaving only 300.

The outcome of the battle depended entirely on the element of surprise. Using horns and torches, Gideon's army engaged in a sneak attack on the Midianite tent, conquering them despite being vastly outnumbered. It's a story about having faith in God and trusting things will prevail even though the odds look insurmountable.

Moff Gideon, like the biblical Gideon, leans entirely on trust. His belief in the Empire is whole-hearted, but it may not have always been. Moff Gideon seems to be the kind of man who would need some convincing, so it's possible Season 2 could include some flashbacks as to how exactly Moff Gideon ended up where he is, including possibly some test designed to convince him to join the Empire.

His namesake's story could also reveal a major upcoming confrontation between him and Din Djarin. Moff Gideon may want to catch his enemies by surprise like Gideon, and the use of a "torch" isn't that dissimilar to the Darksaber. By the end of Season 2, Moff Gideon may be outnumbered. But knowing the original story, this won't prove an issue with the right tactics.

Comparing the Old Testament God to the Empire in Star Wars may not be the most completely waterproof analogy, but faith is faith, whether it's religious, political, or imperial.

The Mandalorian returns to Disney+ on October 30.