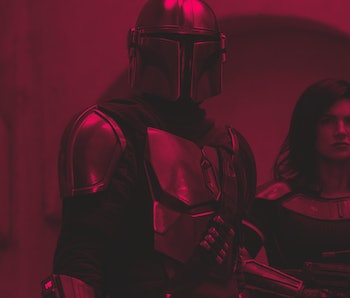 Star Wars: The Clone Wars ended its seven-season run on Disney+ on May 4, but its return gave fans hope that Rebels could also be resurrected for another season. While another season of the animated series seems like a long shot, executive producer Dave Filoni recently hinted there’s room for the show's characters to show up throughout the Star Wars galaxy.

In a recent interview with Deadline, Filoni dashed the hopes of fans when he revealed the likelihood of Rebels getting another season were slim. However, the chapter isn’t closed on the show's beloved characters. Filoni said those characters have “earned their place in the galaxy,” which means we might see them in other Disney+ Star Wars shows, like The Mandalorian.

The Mandalorian Season 1 finale ended with Moff Gideon with the Darksaber in hand. That directly connects to both Rebels and Sabine Wren, a Mandalorian warrior and Rebel leader who once wielded the double-bladed Darksaber. Deadline asked the showrunner the character would return in another Star Wars property, and the answer seems to be a pretty strong maybe. Here's what Filoni told the outlet:

“Oh, I think it’s possible. I mean, it’s definitely something that I left hanging at the end and part of that reason is just it’s always nice in my mind when there’s another story... I love that people are thinking about these stories in the same way that I wondered about many stories… Certainly, I will say it’s something I’ve given a decent amount of thought to, so you never know when or if it will actually ever take shape.”

Of course, this is not a confirmation that Sabine or any other Rebels characters will show up in Season 2. But, what better way to carry on with her story than to include her in The Mandalorian’s Darksaber plot? After all, fans still have no idea how Gideon got his hands on the renowned weapon and a flashback to Sabine’s time with the double-bladed lightsaber could provide a lot of answers.

With Clone Wars and Rebels star Ahsoka Tano slated to make her live-action debut on the Disney+ series next season, Sabine's reappearance makes a lot of sense.

Several leaks have hinted as much. One such leak (via Reddit) suggested that Ahsoka, Sabine, and Rex would appear in at least one episode in The Mandalorian Season 2. Presumably, the episode in question would serve as a type of backdoor pilot for a potential Rebels sequel show. How much of these sketchy leaks will actually prove true remains to be seen, but there’s no doubt that Sabine would fit right into the world of The Mandalorian.