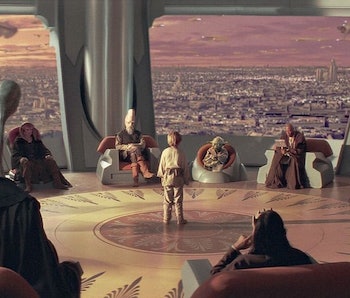 Cameo rumors have run rampant in the months ahead of The Mandalorian Season 2, but not even the chance of a Boba Fett return is as exciting as the possible live-action debut of Ahsoka Tano, all but confirmed to be played by Rosario Dawson. While many are convinced she'll be the "Jedi sorcerer" Mando and Baby Yoda are looking for, a new fan theory proposes another equally enticing possibility.

Redditor alcibiad doubts Dawson will appear as Ahsoka at all, but offers an intriguing read on how she will fit into the plot. This theory suggests Ahsoka will only appear in flashbacks, showing her as she escapes the Jedi purge and filling in the gaps between the Clone Wars finale and her appearance on Rebels.

The inspiration for this theory is the unconfirmed rumor from late August, which claims Ahsoka was spotted on set fighting two bounty hunters in a grey cloak. Ahsoka wore a white cloak in her appearance in Rebels, but wore grey in the Clone Wars finale, suggesting the filmed scene may have been a flashback to roughly the same period.

That wild rumor isn't the only evidence for this theory. The recently unveiled Ahsoka lightsaber thought to include the first depiction of Rosario Dawson in the role glowed blue and green, not the white lightsabers that Ahsoka uses later in life.

This doesn't completely rule out Mando and Baby Yoda meeting Ahsoka on their quest for more knowledge about the Jedi, but it could mean the reveal won't come until late in the season. A mostly-flashbacks Ahsoka would provide the background needed for viewers who didn't watch The Clone Wars.

For those who did, it could bring live-action portrayals of Clone Wars characters. Does this mean we might see Hayden Christensen as a Clone Wars-era Anakin Skywalker? It's difficult to imagine a recap of Ahsoka's time as a Jedi without him.

This is all speculation for now, but seeing as the Season 1 trailer featured Sasha Banks's character prominently, perhaps a mostly-flashbacks Ahsoka could be used to make room for all-new characters. With no clear evidence as to who Sasha Banks is playing, she could be a student of Ahsoka's that will fill the protagonists in on who she was before they encounter her late in the season.

The Inverse Analysis — With star power like Rosario Dawson at their disposal, it's unlikely Jon Favreau and Dave Filoni would limit her camera time. If they're trying to tell Ahsoka's complete story to the characters as well as the less-than-die-hard fans, a story incorporating flashbacks would make perfect sense. It's just a question as to who else could appear alongside her.

The Mandalorian premieres October 30 on Disney+.