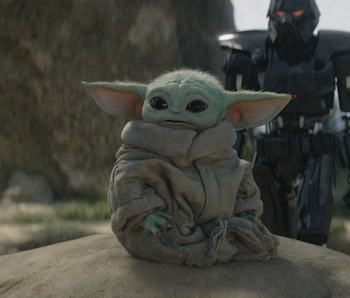 The Force is strong with Grogu. After leaving Ahsoka Tano and Corvus behind, Din Djarin and Grogu journey to the ancient Jedi temple on Tython. There, after giggling at some passing butterflies, Baby Yoda enters a meditative state, activating a luminous blue beam of Force energy to call out to any remaining Jedi. It's so powerful not even Mando can push through the field without being violently hurled back.

While it’s unclear who might answer The Child's beacon, a fascinating new fan theory suggests The Mandalorian could use this opportunity fix the most unnecessary scene in Star Wars: The Rise of Skywalker. Let's dive in.

The theory — A flashback in The Rise of Skywalker revealed Luke had trained Leia to become a Jedi after the events of Return of the Jedi. However, she decided to give up her lightsaber after seeing a future vision of the death of her son, Ben Solo. The flashback scene depicts Leia as a skilled fighter, but the film makes rather empty excuses for why she never completed her training before passing on her lightsaber to Rey.

Update: You can probably guess where this is going, but as one Inverse reader points out, the flashback scene in The Rise of Skywalker takes place shortly after Return of the Jedi (roughly a year after the fall of the Empire), while The Mandalorian is set a full five years after Episode VI. So the timelines don't really match up here, though it's possible Jon Favreau and Dave Filoni could fudge the numbers if they really wanted to. Until then, we regret the error. Our original article continues below. Thanks, Juno!

Tiktok user midwestavenger came up with a fascinating theory that merges The Mandalorian’s plot with the flashback scene from Rise of Skywalker. During their training session, Leia kicks Luke and throws him to the ground. When he removes his helmet, Luke suddenly pauses and looks to Leia, who stops what she’s doing to share a similar look.

What caused this moment? The theorist posits that they paused because Grogu had successfully connected with them from Tython. If you think about the Star Wars timeline, this also makes sense since both The Mandalorian and that TROS flashback take place not-too-long after the fall of the Empire in Return of the Jedi.

While it probably won’t be confirmed — unless Luke really does show up in The Mandalorian — Grogu forming a Force link with Luke and Leia makes the flashback scene a lot more important. The Rise of Skywalker treats it as an afterthought and a way to bring back a young Luke and Leia with some questionable special effects.

The Inverse Analysis — Fans are already speculating that Luke could make a cameo on the show. After all, the Disney+ series has teased a possible Jedi encounter, and there are a number of reasons it could (and should) be Luke. The beloved Skywalker also spent the years after the original trilogy establishing a new Jedi school to train the next generation of Force users. Will Grogu join Luke's Jedi Academy?

Luke, who was interested in rebuilding the Jedi legacy, would probably want to recruit Grogu as a student. Luke’s Mandalorian debut could offer Din Djarin some information about where Gideon might have taken Grogu (and also what they want with him). And, if nothing else, the theory would go a long way to fix the worst scene in the Rise of Skywalker.