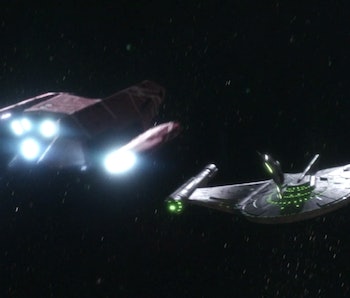 If there's one reason people love Star Trek — beyond the social commentary and boundless optimism — it's almost certainly the super-sweet spaceships. Just seeing a certain ship design in any given incarnation of Trek can prompt sorts of chills. In 2018, it was the return in the classic USS Enterprise NCC-1701 in the season 1 finale of Discovery. For some fans, seeing a Borg cube again in Picard was awesome. And for even more discerning fans, seeing a retro-style of Romulan ship in Picard Season 1 was equally rad.

But where did that retro Romulan Bird-of-Prey come from? In Picard Season 1 Rios described it as an "old heap," and chronologically, a ship like that shouldn't even have been flying around. So how did it get there? The latest episode of Lower Decks may have just answered this question. Here's how episode 8, "Veritas," may have given us a clue to how this 100-year-old starship ended up battling Jean-Luc and the La Sirena in 2399. Spoilers and speculation ahead.

In the Lower Decks episode "Veritas," a huge portion of the extremely hilarious plot involves a complicated covert mission in which the crew of the USS Cerritos has to steal an antique Romulan Bird-of-Prey from a Vulcan museum. Presumably, this is because the Bird-of-Prey has a cloaking device, which lets them infiltrate Romulan Space, but to Rutherford's point, why not just ask the Vulcans to borrow it? Or why not get a ship with a newer cloaking device?

The answer is...well...the joke is there's not a good answer, and that's because the Lower Deckers will never have all the information the senior staff has when it comes to convoluted Starfleet missions. But, for the fans, it means that we got to see a lot of old-school Star Trek ships, including a Vulcan shuttle from Star Trek: The Motion Picture, as well as several TOS style ships in the museum scene. But, the ship that's the star of this episode is easily the retro Romulan Bird-of-Prey, stolen by Jax and Rutherford, and later flown by Tendi and Ransom into Romulan space. This is the same design of a Romulan ship from the classic episode of The Original Series called "Balance of Terror."

Although many fans remember having a model or toy version of this ship, it strangely only appeared in one episode of the original run of TOS, and then was retroactively inserted into the digitally remastered version of the TOS episode "The Enterprise Incident." That means, that his ship, which the Romulans used in the 2260s, was only actually seen in two canonical Trek episodes ever, and one of those was a retcon. The prequel series Enterprise featured some ships that were similar in design, but they were not supposed to be the exact same ships.

The on-screen scarcity of the Bird-of-Prey remained limited to just those two TOS appearances until 2020 when one of these ships appeared in Star Trek: Picard Season 1, specifically in Episode 4, "Absolute Candor." Because that episode took place in 2399, the Bird-of-Prey was totally outdated relative to the other ships we saw on that series. The explanation for its appearance was this: Rios said a local warlord named Kar Kantar had obtained an "antique" Bird-of-Prey and was causing problems near the planet Vashti in what used to be the Romulan Neutral Zone. How or why Kar Kantar got ahold of this ship isn't clear. One has to assume that Kantar got it from other Romulans (assuming Kantar is a Romulan) but maybe that's not the case.

In fact, in the new episode of Lower Decks, it seems very possible that Ransom's team ditched this Bird-of-Prey in Romulan space after they completed their mission.

"Absolute Candor" takes place in 2399. This episode of Lower Decks, "Veritas," probably still takes place in 2380. This means that if Ransom and Tendi ditched their stolen Bird-of-Prey in 2380, it stands to reason that 19 years later, a warlord could have picked it up and used it for their own purposes. If there weren't a lot of functioning ships of this design in Romulan space — which let's face it, seems like the case, the ship is at least 120 years old by the time of Lower Decks — then there would be no real reason why the Romulans would have one in working order. The Romulans also don't seem like the kind of people who would keep old ships in museums the way people of the Federation do.

That said, it's not entirely clear why the Vulcans had an antique Bird-of-Prey in a museum either. Was it one that they captured? Was it on loan? Was it gift that was part of the secret peace deals Spock was trying to make happen during The Next Generation? If the Bird-of-Prey in Lower Decks is the same one in Picard, we may have solved one part of this minor starship mystery. But, we still kind of don't know where it came from. We'll probably never know, but then again, solving Romulan mysteries is a part-time job of any Star Trek show, so if we're lucky, we'll see a classic Romulan Bird-of-Prey again. Let's just hope this time, it doesn't take 30 years for it to decloak.