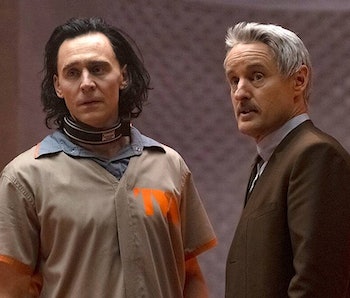 Loki exists in a universe of its own, both literally (thanks to the multiverse) and figuratively, as its whole vibe is unlike any other show or movie in the Marvel Cinematic Universe. It’s also the first MCU TV show to snag a Season 2 renewal, leaving fans wondering just how much Season 2 will differ from the already eclectic Season 1. With filming underway, we’re just now seeing what this means — and it’s exactly what fans have wanted since Season 1, Episode 1.

Photos posted by The Mail Online show Tom Hiddleston as Loki and Owen Wilson as TVA agent Mobius. They seem to be wearing matching outfits: light blue dress shirts, skinny ties, and brown pants. It may not be much, but as with all Marvel set leaks, you can speculate with just about anything. The twinning look is definitely new for the two characters, but in the context of the series, it makes perfect sense.

At the end of Loki Season 1, Loki returns to the TVA to find it completely changed. After the Sacred Timeline was destroyed, it effectively unleashed the multiverse. The entire Time Variance Authority now falls under one main authority: Kang the Conqueror. It’s up to Loki and a clueless Mobius to fix it.

These pictures prove that Loki Season 2 will deliver on the charming buddy cop comedy that Season 1 only hinted at. Throughout Season 1, Loki was firmly underneath Mobius in the power dynamic. Mobius had to explain timelines to Loki, who was essentially a valuable prisoner from the get-go. In Season 2, we’re getting a role reversal that’s ripe for choice bits of comedy. Gone is the electric collar on Loki and the jacket emblazoned with “VARIANT.” Now, they’re wearing what seems to be the TVA uniform but without the jacket we see Mobius in all throughout Season 1.

They’re real partners now. Which one is Hutch, and which one is Starsky?

Loki is the one who understands how these things work even better than Mobius, except Loki is estranged from the new hierarchy at the TVA. Loki has seen Kang the Conqueror (or, at least, a Variant of him) in action and knows what they’re up against. But he can’t crack this case alone. He needs Mobius to navigate this new status quo, and Mobius needs Loki to get a peek behind the curtain. Now, they’re truly a perfectly matched pair.

Who knows what crazy hijinks these two will get up to over the course of Season 2, but if these set photos are anything to go by, there will be more of what fans loved in Season 1 — Loki and Mobius bickering and bantering while they piece together a mystery — and maybe some highly anticipated scenes, like Mobius finally getting to ride a jet ski.