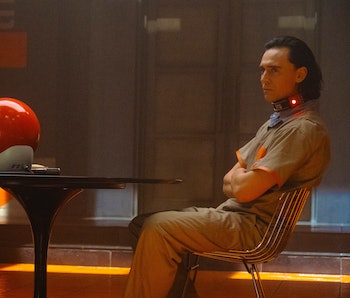 Loki’s introduction of the TVA is already clearing up questions Avengers: Endgame left fans puzzling over. According to the MCU bureaucracy’s view of the Sacred Timeline, all that film’s complicated time travel shenanigans were merely what was destined to happen. Though the Avengers were warned against creating new timelines in their fight against Thanos, all went according to plan.

It seems a bit too tidy, doesn’t it? Well, a blink-and-you-miss-it moment in Loki’s premiere could ruin the happiest part of Endgame’s ending.

While the inside of the TVA seen in Loki looks sparse, other variants are arrested alongside Loki for committing time crimes. There’s the son of the Goldman Sachs board member who gets deleted for not taking a ticket in line to see a judge. And while Loki’s on the run from his captors, a woman in what looks like 1940s attire is marched through a portal in the corner of the screen, as pointed out by TikTokker 3cfilms:

Could this woman be Peggy Carter? After all, the secret agent’s timeline was forever altered when Steve Rogers made his farewell tour across the universe, returning the Infinity Stones to their true origins then returning to the past, where he happily lived out the rest of his days with Peggy — or at least that’s what we think.

Steve doesn’t mention Peggy in his appearance as an elderly man in Endgame, so there’s a chance she was taken into TVA custody, and that their reunion wasn’t part of the Sacred Timeline. But that doesn’t explain one major issue — why isn’t Steve in custody, since he’s the one who did all the time traveling?

Yes, Steve is protected against TVA intervention when it comes to his previous time travel actions in Endgame, but if traveling back to Peggy went against the Sacred Timeline, why would Peggy take the fall instead of Steve?

Perhaps Peggy’s appearance doesn’t have anything to do with Endgame’s time travel exploits at all. As an agent of S.H.I.E.L.D., she may have gotten her hands on a time travel device and attempted to use it to reunite with her lost love, landing her in TVA custody. She would probably be “reset,” just like Loki was, putting her right back where she came from.

This explains a lot. After all, if your paramour showed up out of nowhere in a tactical time travel suit, looking significantly older than he did the last time he was in the 1940s, you’d have some questions too. But if Peggy was aware of how time travel functioned due to a previous run-in with the TVA, she would be much more accepting of Steve’s return.

Regardless of which theory is true, this Easter Egg underlines just how powerful the love between Steve and Peggy truly is. Nothing can come between them, not even time. What matters is that them growing old together appears to be part of the Sacred Timeline, so Steve — and his fans — can rest easy.