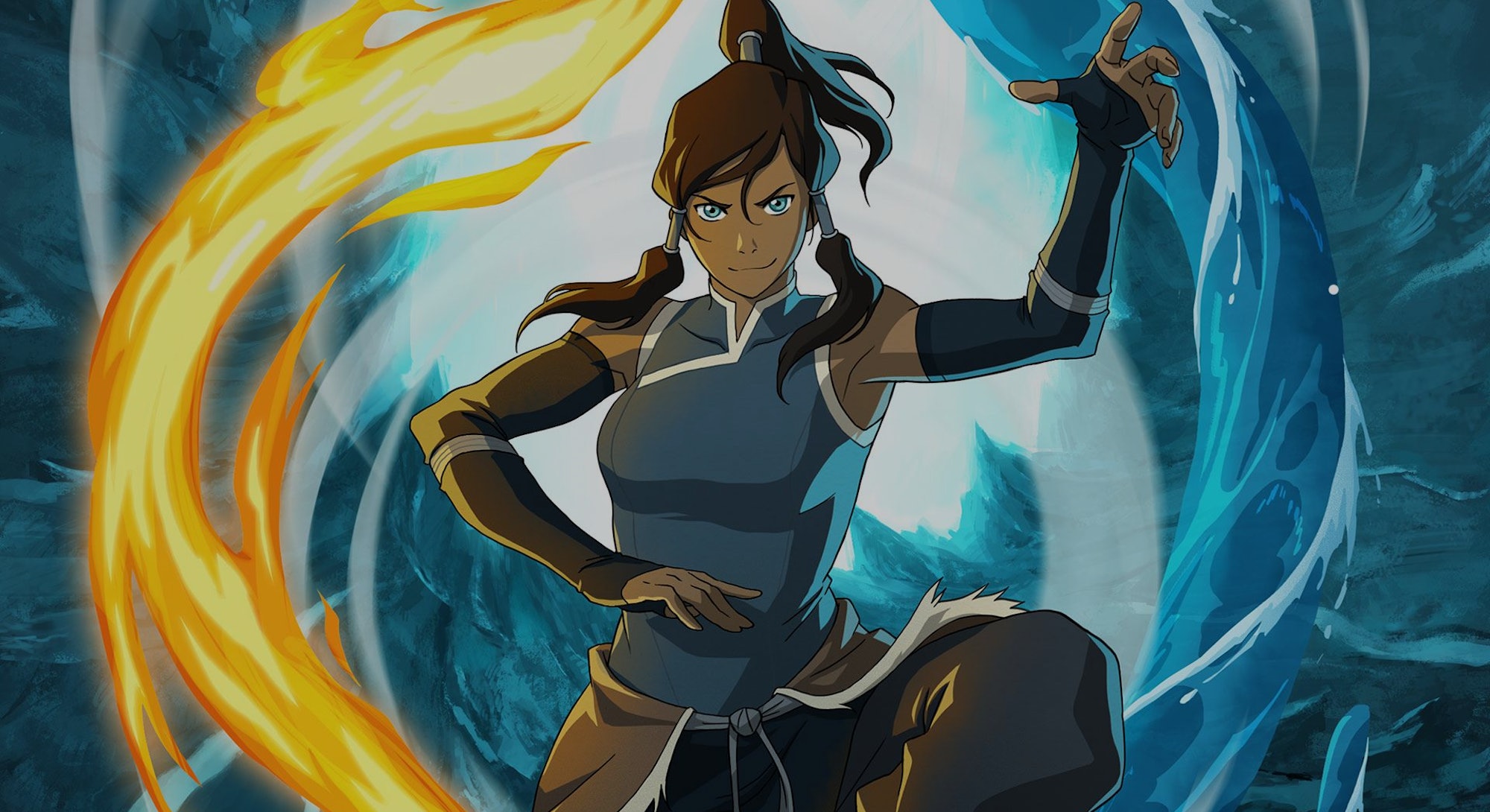 “I think it still is polarizing,” says Janet Varney, voice of Avatar: The Legend of Korra’s eponymous heroine.

We’re currently sitting in a canteen at Calgary Expo 2022, talking about a piece of fanart Varney received earlier in the day. Despite being surrounded by food, Varney hasn’t eaten a thing. She’s been too busy meeting fans and signing autographs for the last seven hours.

“Polarizing” — any Korra fan worth their salt should instantly know the scene we’re discussing.

“I did a con — I don't want to get into where, because I feel bad — but I definitely did a con in a specific place where I just didn't have that many people who wanted to talk about the show,” Varney says. “And the people who did almost looked furtive about coming up. It was a very Christian community. And finally, someone literally pulled me aside and said, ‘I'm so sorry, this is because your character is gay.’”

While The Legend of Korra turned 10 years old just a few weeks ago, the incident Varney is discussing occurred right before the pandemic. If you didn’t know which scene she was referencing in the first paragraph, it’s the final sequence of the show, which depicts Korra and her friend-turned-romantic-partner Asami holding hands as they set off into the Spirit World together. This may seem relatively tame by today’s standards, but as Varney points out, some people still take issue with it today.

“At first I just had that hot, prickly flush of anger and frustration, and that feeling you have if you're a people pleaser where you're like, ‘How do I change their minds? I think I can reach them all at once,’” Varney says. “And then I just sort of took a breath and thought, ‘This is really good for me to experience because I live in the bubble of Los Angeles, and before that, I lived in the bubble of San Francisco.’ So it was really good for me to even get a little pinch of what some young people still experience on a regular basis, feeling marginalized or uncomfortable, or that they’re being looked at askance. It’s still out there.”

But before The Legend of Korra could have its groundbreaking finale, the series had to find its footing — and so did Varney.

The answer is simple: with great difficulty. For a long time, Varney was convinced she didn’t get the part. And yet she was brought back — on several occasions, in fact — to meet Avatar’s showrunners and undergo chemistry tests with her could-be co-stars. Eventually, she got the gig. Hearing her recall her extremely Korra-esque reaction now, it’s easy to see why.

“I was in a fabric and crafts store in Burbank, California when I got the call that it was happening, and I jumped up and down and shrieked,” Varney says. “All the other sweet little old ladies that were shopping for their fabrics were sort of startled, like little hens when a loud sound makes them kind of go… what?”

Don’t lie — you can picture Korra doing the same.

From that point on, everything gradually fell into place. Comic Con 2012 strikes Varney as a particularly memorable moment that both made the role feel real and ratcheted up the pressure.

“I’d never been to a con,” she says. “We came out and there were like 5,000 people in Exhibit Hall H. Everyone was wonderful and we sang Secret Tunnel — it was amazing.”

That shouldn’t come as a surprise series given how dedicated Avatar fans tend to be — hell, I personally have Iroh's “Leaves From The Vine” scene tattooed across my entire inner bicep. The people who watched Avatar as kids (many of whom have since watched it again as adults) feel a genuinely deep connection to the show. That’s why it’s still so crucial to pay heed to Varney’s thoughts on the relationship between Korra and Asami, which fans have affectionately dubbed “Korrasami.”

When you consider how close Varney was to the entire creative process, the importance of her perspective is compounded even further. The finale is obviously less controversial these days, although her hope is that kids watching it now never forget how it was received back then. She wants people who have grown up with notably progressive shows like She-Ra to look back and think, “What? There was controversy around Korra and Asami… kissing on screen? That’s so strange!” It’s all part of the same trajectory towards better, more inclusive stories.

“There are young people who came out to their folks because they felt inspired by Korrasami,” Varney says. “My parents were teachers. They were great with me becoming a performer, but I always felt like… does this matter? I saw the legacy of my parents touching all of these kids' minds year after year like, ‘Oh, Mr. Varney, you're my favorite teacher!’ And so when I started getting that feedback, I felt like I contributed something, however small.”

It’s obvious Varney had a profound impact on viewers all over the world through her performance as Korra. And so it’s only natural to wonder — could it be possible for the 83rd Avatar to make a return with the advent of Avatar Studios?

“I think it's entirely possible,” Varney says. “I mean, certainly, we left her at a fairly young stage of her life.”

“There’s just way more diversity in voice acting now than there was then.”

At this point, Varney pauses, as if deep in thought.

“I wouldn't want to be the voice,” she says after a moment of silence. “I think I brought to it everything I could from my experience. And there are many, many things that I relate to. I also feel like there's just way more diversity in voice acting now than there was then, and I would love to see that expressed. I can only assume that’s something that's important to Mike and Brian because they are so passionate about telling diverse stories and they're so passionate about being as authentic as possible.”

She continues: “So I'm happy to have been this Korra. I certainly am showing up for Avatar Studios as a fan, and I'm ready to talk about it forever with Dante on the [Avatar: Braving the Elements] podcast — as myself.”

Whether Korra and Team Avatar ever come back at all remains a mystery, too. In Varney’s own words, “They're very hard at work and there's a lot of different things happening all at once.”

The gravity of Varney’s words is even heavier than it might initially seem. She was actually the first person to see the first image of the show, where Korra is standing in front of Air Temple Island with her back to the camera — it made her cry.

Varney also vividly remembers meeting with franchise co-creators Michael Dante DiMartino and Bryan Konietzko when they told her and Seychelle Gabriel (Asami) what they had planned. She worked with the likes of Lisa Edelstein and J.K. Simmons — she asked the casting director to use full names before her scene with the latter, purely so she could hear “Janet Varney” and “J.K. Simmons” in the same sentence. That’s not to mention the icon behind Korra’s Season 3 villain, Zaheer.

“There were a lot of moments like that where you walk in and go, 'Oh no, Henry Rollins is here. This is a big deal,'” Varney says. “It was great. He's like, the nicest, funniest dude. But he's still Henry Rollins. He looks like he's going to be exactly like who you would expect from Black Flag. And they put him really far away from my mic and my little room, just sort of in a corner, in more darkness than everyone else. It was very intimidating.”

In the years since, The Legend of Korra has become legendary in and of itself. A decade since it debuted, it’s clearer than ever that it will continue to be important for decades to come.

“I think if recent events have shown anything, it's that this team has a real gift for timeless storytelling,” Varney says. “Like the first series, Avatar: The Last Airbender — yes, some of it’s luck, but a lot of it is the art itself. If it's good, and if it's dealing with very fundamental stories that are extremely human, for better or for worse, those conflicts are going to remain relevant. And they will ebb and flow in how much they mirror real life. But I'm just so happy that people embraced a show that ostensibly was on this channel that people associate with [kids], and I appreciate the channel for taking the chance.”

That last point really gets at the heart of what makes The Legend of Korra so enduring. Sure, it aired on a kids’ channel — but all the kids who watched it 10 years ago are all grown up now. The fact that shows like The Last Airbender and The Legend of Korra are willing to place their faith in kids’ capacity for emotional intelligence is an enormous element of what makes them so special. That’s why years later, as an adult, we can return to them and learn totally different lessons to the ones we learned back in 2012.

“You really get a strong sense of Mike and Brian and the whole team having a very specific vision, and being uncompromising and saying, You know, kids can handle this. Trust us. Remember this other series we did?” Varney says.

“I appreciate the channel for taking the chance.”

She points to Amon, the Season 1 antagonist who blurs the line between good and evil, as just one example of Korra’s ambitious storytelling. “There's more to it than, He bad, she good.”

The entire series is full of complex characters, from its fascist final villain — “Kuvira and Korra are two sides of the same coin,” Varney says — to the protagonist’s many allies and mentors throughout her journey. That’s why The Legend of Korra remains relevant today, and why it will still matter once another decade has passed.

“When some other horrible stuff happens in 10 more years, there are probably going to be different elements of Avatar: The Last Airbender and Korra that people point to and go, ‘Wow, remember when this came out, and this wasn't even a thing yet? I'm really glad we have this now.’”