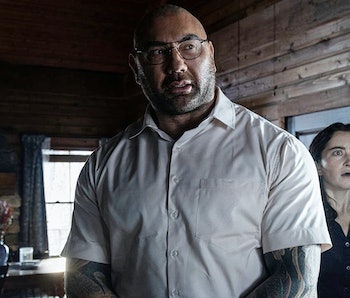 For most of us, getting a surprise visit from Dave Bautista (Glass Onion) and Rupert Grint (Harry Potter) would be a delight. But for a Philly couple and their daughter, such house guests are about to become their worst nightmare.

Knock at the Cabin is one of the most highly-anticipated horror flicks of 2023 — and M. Night Shyamalan’s 15th feature film. The premise is deceptively simple. While vacationing at a remote cabin, Andrew (Jonathan Groff), Eric (Ben Aldridge), and their daughter Wen (Kristen Cui) are taken hostage by four strangers who demand they answer a harrowing question: which family member will they sacrifice to avert the apocalypse?

Harry Potter fans likely recognized Grint in the trailers, but so did a smaller cohort of viewers: fans of Apple TV+’s Servant, a tense, four-season psychological thriller created by Tony Basgallop and run by Shyamalan. Intriguingly, Knock and Servant appear to share more than just Grint.

While we don’t know what twists and turns Shyamalan may have inserted into Knock at the Cabin, we do know the book it’s based on explores themes of sacrifice, loyalty and distrust, paranoia, occultism, and the supernatural.

Likewise, Servant takes place within close, agoraphobia-inducing quarters, trading northeastern woods for lavish Philadelphia brownstone digs. While Dorothy, a TV reporter, and Sean Turner, a chef, have ample room to roam about their home, they seclude themselves to repress and escape the loss of their infant son, Jericho. The nature of Jericho’s passing is horrific, and the Turners cope with an unusual approach. Their therapist is treating them with “transitional object therapy,” replacing the flesh-and-blood Jericho with a hyperrealistic “reborn” baby doll. Sean is aware that this isn’t the real Jericho, but Dorothy is not.

Further complicating this strange situation is the arrival of Dorothy’s mysterious live-in nanny, Leanne, who seems to have an (in)experienced hand at witchcraft and a genuine connection to the otherworldly. Her abilities lead to a miracle, but at a steep cost: her freedom, for one, as well as the fates of countless others, and the near-constant threat of a religious cult. The Turners, like the parents in The Cabin at the End of the World, aren’t willing to make any sacrifices that could serve a “greater good” at the expense of their family.

Servant succeeds in ways some other Shyamalan projects don’t thanks, in part, to its smaller Apple TV+ budget. The director delivers an in-depth character study zoomed in on a relatively small cast. The slow and satisfying burn of Servant hasn’t drawn Apple TV+’s biggest numbers since the show’s debut in 2019, but the well-reviewed series has survived and will conclude its story in January the way Shyamalan and Basgallop intended.

It looks like Knock at the Cabin will borrow from Servant’s best tricks while remaining rooted in Tremblay’s book. Now fans will just have to wait and see if it will be remembered as one of Shyamalan’s hits — or one of his many misses.

More like this
Culture
18 hours ago
Signs is Remembered as M. Night Shyamalan’s Alien Movie, but it Has a Human Heart
By Mónica Marie Zorrilla
Entertainment
Feb. 2, 2023
7 DC Movies and TV Shows We Won't See Under James Gunn
By Eric Francisco
Entertainment
Jan. 30, 2023
New House of the Dragon “making-of” book plunges into the fantasy hit’s creation
By Jeff Spry
LEARN SOMETHING NEW EVERY DAY.
Related Tags
Share: