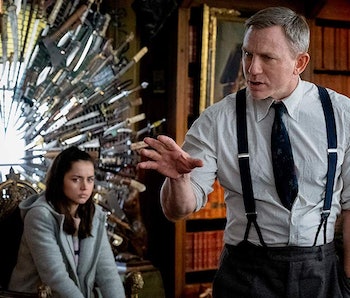 The donut hole is getting another donut hole: Knives Out is getting a sequel. Writer-director Rian Johnson's murder-mystery Knives Out recalls the glory days of the murder mystery where Agatha Christie adaptations like Murder on the Orient Express and Death on the Nile reigned supreme. Just like those previous murder mystery movies, Knives Out also boasts a truly star-studded cast led by Daniel Craig as top-notch sleuth Benoit Blanc. In addition to Craig, the Knives Out cast includes Jamie Lee Curtis, Don Johnson, Chris Evans, Ana de Armas, Michael Shannon, LaKeith Stanfield, Toni Collette, Katherine Langford, and Christopher Plummer.

The little whodunit that could became a box office success after its theatrical run kicked off in November 2019. To date, the Lionsgate feature film has earned a jaw-dropping $306 million worldwide, more than making back its $40 million budget. Not only was it a hit at the box office, but it was also an awards-season favorite with three Golden Globe nominations and an Oscar nomination for Best Original Screenplay. Given its success, it’s no surprise that Lionsgate would be interested in making a sequel to the film.

Now that Rian Johnson no longer has his hands full with Star Wars — the proposed trilogy he’s developing with Lucasfilm seems to be at a standstill for the time being— there’s more time to conjure up another mystery for Knives Out 2. Whether there will be an abundance of knit sweaters in the sequel is unclear, but here’s everything we do know about Knives Out 2 so far.

The sequel is in the early days of development, meaning there’s no scheduled release at present. Johnson told The Hollywood Reporter that he was already working on the sequel before the first film even released. Lionsgate officially announced the sequel in February 2020 to start a film franchise.

But in the year following that announcement, the Knives Out name changed franchises from Lionsgate to Netflix. The streaming service bought the rights to two sequels for $450 million. It also announced that Knives Out 2 would begin filming on June 28, 2021, in Greece. Given that the movie hasn’t been filmed yet, the sequel should be arriving on screens in 2022 at the earliest.

Will any Knives Out cast members return to the sequel?

Daniel Craig’s character, gentleman detective Benoit Blanc, would be the focus of the Knives Out sequel, according to THR. Johnson’s producing partner Ram Bergman said Craig “had so much fun doing it, and he wants to do more.” So, it’s a pretty safe bet that Craig will be on board if the film does become a reality.

There’s no word yet on whether anyone else from the original cast would return. Still, it’s more likely that the film will have a new cast of characters, especially if Johnson aims to create a murder mystery universe in the style of novelist Agatha Christie's famed Poirot mysteries. That said, we're not opposed to Ana de Armas' Marta Cabrera returning to be the Watson to Blanc's Sherlock.

We do know of at least one new cast member for the sequel. Deadline reported that Dave Bautista (Guardians of the Galaxy) had signed onto the film in an undisclosed role.

What is the plot of Knives Out 2?

All we know so far about the plot is that it involves Benoit Blanc investigating a new case. That makes sense since Craig is the only original cast member mentioned as possibly returning. Given what we know about Harlan Thrombey and his fondness for crafting intricate mysteries in fiction and real life, he may have a posthumous mission for Blanc. Craig’s character also briefly mentions that his father and Thrombey had been old friends, which could also tie in somehow.

In one particularly notable scene early in the film, Toni Collette's character, Joni, mentions that she read a tweet about a New Yorker article profiling Blanc. According to Joni, the article includes a mention of Blanc's work on a case involving a dead tennis instructor. It would definitely be fun to see a pre-New Yorker article Blanc working on a case that eventually catapults him to fame.

Then again, the first Knives Out established that Blanc isn’t averse to traveling to take on a case, so the plot to Knives Out 2 could take him anywhere so long as there’s enough intrigue.

What is the title of Knives Out 2?

Wouldn't you like to know! Speculation about what the new title of the Knives Out sequel could be — because it can't just be Knives Out 2, I mean c'mon — has occupied many a fan's time. So far, no official sequel titles have been revealed. However, we'll likely get word on the new title around the same time filming on the sequel begins.

Wait, so I won't see more of Chris Evans in that incredible sweater?

Hate to burst your bubble, pal, but probably not. But that doesn't mean Johnson and the Knives Out costume department won't figure out a way to give us even more swoon-worthy sartorial moments featuring ridiculously good-looking people in the sequel.

Knives Out is now available on digital, DVD, Blu-ray, and 4K Ultra HD.