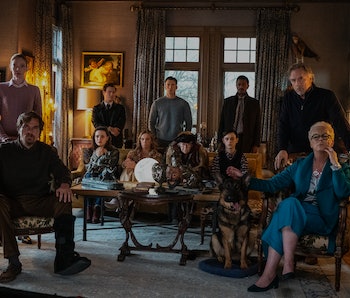 Everyone’s a suspect in the unusual death of mystery novelist Harlan Thrombey in Rian Johnson’s latest, Knives Out. His entire lousy family had crystal-clear motives for wanting to put him six feet under. But just when you think gentleman detective Benoit Blanc finally has it all figured out, Johnson yanks the rug out from under your feet. What’s all this about medicine bottles and toxicology reports, now? If you’re still a little turned around about what happened to Harlan and the motives behind it all, read on.

Warning: spoilers ahead for Knives Out. Go no further unless you’ve already seen the movie, or you’re crafting a cunning alibi for what you were doing this weekend.

Technically, Harlan killed himself by cutting his throat. That element of the story didn’t change from the film’s opening moments. However, the person responsible for his death is Ransom Drysdale, the grandson in the enviable cable-knit sweater played by Chris Evans. That’s right, Cap’s gone from being “America’s ass” to “America’s asshole” in less than a year. Here’s how it all shakes out.

Throughout the film, we see snippets of a shouting match between Harlan and Ransom in his study. Eventually, these flashbacks culminate in the revelation that Ransom is the only member of the family who knew of his grandfather’s plan to disinherit everyone and leave his fortune to his loyal nurse and confidant, Marta. Ransom then decides to kill his grandfather and frame Marta for the crime, knowing that the so-called “slayer rule” of inheritance law — yes, this is a Real Thing — disqualifies a killer from claiming their victim’s assets. With her out of the way, the money would go to the family, presumably divided equally among the families of each of Harlan’s three children, and likely a hefty share for Ransom himself.

With this scenario in mind, Ransom switched the labels on the two medication bottles in Marta’s medical bag and removed the antidote meant to be used in the event of morphine overdose. Harlan threw a wrench into Ransom’s plan by cutting his own throat in an attempt to pre-emptively vindicate Marta, convinced he was about to die due to her innocent mistake.

Ransom then hired Benoit Blanc to investigate the unexpected suicide by throat-cut, still hoping to frame Marta for the “murder” and trigger the slayer rule. But there was another unexpected complication, in the form of the housekeeper, Fran. She saw Ransom in the attic fiddling with the bottles, and also had access to Harlan’s toxicology report — via her cousin, who she mentions in passing early on. The report proved Marta actually hadn’t given Harlan a lethal overdose.

For much of the film, Marta is utterly convinced that she accidentally killed Harlan, and tells Ransom as much during their diner pow-wows. After hearing her side of things, Ransom was desperate to maintain the illusion of his innocence and keep the report secret. So he burned down the records facility and abducted Fran, who later died from — you guessed it — a morphine overdose.

Ransom, Harlan, and even Marta herself all failed to account for her expertise and familiarity with her patient’s medications. But she actually administered the correct doses, having immediately recognized the “feel” or viscosity of each injection, even after Ransom had swapped the bottles. This means Ransom unwittingly tricked his grandfather into cutting his own throat, then killed Fran to cover it up. Harlan wouldn’t have died at all if someone had just called a flippin’ ambulance.

Apart from poor Fran, everything worked out just as Harlan might have hoped — an intricate mystery solved, the last laugh on his ingrate family, the patsy vindicated. Shame he wasn’t around to see it.

Knives Out is in theaters now.