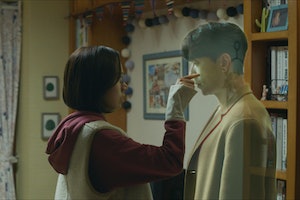 shows for fans of high-concept thrills

Probably the best way to start is with Korean dramas, a masterclass the art of dramatic storytelling: from romances to crime thrillers to historical epics, these shows wow with lush characters and plots that never take themselves too seriously. With the evolution of these stories, science-fiction twists have created cross-genre hidden gems deep within Netflix's algorithm. Below are seven selections, along with the U.S. shows and movies they're similar to.

Lee Gon is the king of the fictional Kingdom of Corea, but one day he crosses through a barrier and encounters a parallel world: the actual Republic of Korea. His adventures in the real world lead him to cross paths with parallel figures from his former life, including a young police officer he recognizes as the woman who saved him as a child. Meanwhile, his evil uncle seeks to destroy him across both realms.

The King blends Hamlet-esque royal intrigue with crime procedurals, and naturally there's a supernatural twist and a hefty dose of romance as well. This show is still only halfway through with its first season, with episodes posting weekly on Netflix, but there's plenty of content to get you going, and a rich, meaty plot.

Go Se-Yeun, an ambitious lawyer, and Cha Min, the heir to a cosmetics empire, are friends who die in separate incidents. Through the use of the Abyss, a marble-like resurrection stone, they inhabit new bodies. While getting adjusted to their new forms, they must solve the murder of Go Se-Yeun's original self, and reckon with their loved ones.

This show is a chimera of fantasy/murder mystery/romance, but it spins each plate quite well. It also makes statements on how easy it is for those who are attractive to make their way in the world. While Se-Yeun's new body is relatively more normal, Cha Min gets "a face that will make life easier," which is quite the change for both of them.

Watch if you liked: Black Mirror's love stories with a technological twist

What at first glance seems to be a soapy teen romantic drama turns dark in Love Alarm. Set in a world where an app exposes your attraction to those in a 10 meter radius, young Kim Jo-Jo must decide between two guys: her childhood best friend and the big man on campus, who both "ring her alarm" but approach love in very different ways. The premise might seem preachy and technophobic at first glance, but there's genuine pathos in looking at love through different lenses. Of course, there's also plenty of teen drama, but that's part of the fun.

K-dramas typically run for 16 episodes, but Netflix has only included the first 8 in its first season. Shooting for Season 2 was halted by the coronavirus pandemic, but it's for sure on the way. We'll know who Jo-Jo picks soon enough.

Watch if you liked: Game of Thrones' political power struggles and zombies

A show about a plague might not be the wisest choice at present, but there's a lot more to Kingdom than the undead. Crown Prince Lee Chang must not only protect his people from a new outbreak, he must protect his family's claim to the throne too. There's political intrigue, power plays, betrayals... and also, a lot of zombies. One of the benefits of the Korean drama is the rich history it can pull from for genre shows like this one.

If you like Game of Thrones, all the same selling points are here: an ailing king, a powerful and more importantly power-hungry dynasty, a pregnant and conniving Queen, a smart friend who finds the crucial information about a mysterious disease in a book...and again, also there are zombies.

Watch if you like: The X-Files's bantery skeptic/believer main duo who learn to love each other

Another period piece, this one pulls a 17th century practitioner of traditional Korean medicine out of his time and into modern-day Seoul, where he clashes with a young upstart cardiac surgeon. He saves one of her patients with only acupuncture, she gets angry, but over the course of the show what develops is a combination romance, medical, and time travel show that balances all three better than you'd expect.

Of course, this wouldn't be a K-Drama without some sort of tragic backstory, and that's explored at length in this show's 16 episodes, balancing the drama between both worlds and, like all time-crossed lovers, leading to a heartbreaking conclusion.

Watch if you like: Supernatural's gritty fight between good vs. evil

Possessed is not a melodrama, like many of the other selections on this list. It's a brutal police thriller that also happens to be about ghosts. Kang Pil-Sung is a police detective who can see spirits, and he recruits medium and dabbler in spiritual manipulation Hong Seo-Jung to help him exorcise the ghost of a murderer. What results is a tragic love story and a lot, and I mean a lot, of murder.

In a show about ghosts, murder isn't as permanent as it would be elsewhere, and the narrative that builds ends in an earth-shattering finale on a secluded island. There's no predictability here. Anything could happen, so expect the unexpected.

Watch if you like: Her's heartfelt love story between a human and an AI assistant

Han So-Yeon is a young advertising assistant with face blindness disorder who is given a prototype pair of glasses with a holographic AI assistant named Holo built right in. So-Yeon falls for Holo, since his is the first face she can actually recognize, not knowing he's modeled after the glasses' creator, Go Nan-Do. Unfortunately, Nan-Do's attitude is the opposite of Holo's cheerful and helpful personality.

My Holo Love has a sci-fi love triangle for the ages. A woman, a hologram, and the guy the hologram is based on but who tends to be grumpy due to an unhappy childhood. On top of all that, the show also addresses the ethics behind AI and the rules of robotics, and adds some tech company dealings and intrigue. It's Her meets Silicon Valley, with more romcom.